Dow Jones Today: Trade Again, But Not China This Time

Just when it appeared the global trade outlook was getting a little more sanguine, the thesis was dealt a blow when the White House threatened tariffs on $4 billion worth of imports from the European Union (EU). 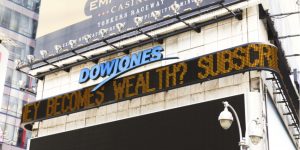 That is a piddly amount in comparison to the tariffs that were bandied about at the height of the U.S.-China trade tensions. It is worth noting President Donald Trump previously singled out the EU as a trade offender.

Still, the U.S.-EU trade tiff is not on par with the recent wranglings with China. As such, equities did not endure significant punishment today. The Nasdaq Composite rose 0.22% while the S&P 500 added 0.29%. The Dow Jones Industrial Average gained 0.26%.

Before getting into some of today’s Dow winners, let’s take a look at Nike (NYSE:NKE), one of Dow’s Tuesday losers with a loss of almost 1%. It is doubtful that Tuesday’s loss represents the start of material declines for Nike stock, but today’s action in the athletic apparel giant is endemic of the current political environment in the U.S.

Nike was prepared to launch sneakers featuring the Betsy Ross version of the American flag. Former NFL football player Colin Kaepernick, a Nike endorser, complained that the flag was used during a period of slavery in the U.S. Nike decided to scrap the sneaker.

It did not end there. Admonishing the perceived political correctness, Arizona Gov. Doug Ducey said he would yank the financial incentives his state offers Nike if the Betsy sneaker is pulled.

Hats off to Verizon Communications (NYSE:VZ) for leading the way in the Dow today. On seemingly no company-specific news and below-average volume, the telecommunications giant jumped 2.59%. In the stocks favor today is this: Verizon did not rally simply because investors favored defensive stocks today. Many of the Dow’s Tuesday winners were not boring or defensive stocks.

Shares of Apple (NASDAQ:AAPL) nudged up 0.59%, but some analysts are forecasting volatility for the iPhone maker between now and its next earnings date on July 30.

Citigroup analyst Jim Suva “estimated revenue of $52.6 billion, with iPhone revenues down 12% to $25.76 billion, and profits of $2.06 per share,” reports Barron’s. For Apple’s June quarter, those figures are below consensus estimates.

In a few months, Apple will likely unveil a new iPhone. Some analysts are not expecting major hardware improvements and it is expected the company will not have 5G-compatible phones out until 2020.

Visa (NYSE:V) had a decent day, rising 0.77% after Wedbush analyst Moshe Katri said Facebook’s (NASDAQ:FB) recently unveiled Libra digital currency does not present a significant threat to Visa. Visa investors may get more word on that when the company reports earnings on July 23.

We’ve discussed several times in this space the aftermath of U.S.-China trade talks and their implications. That aftermath is here and while there will be ongoing talks between the two sides, for now, investors are asking, “what’s next?”

Recent global economic points have been sluggish, a scenario that if persistent, puts burden on various central banks — including the Federal Reserve — to act. That means investors should focus on monetary policy and earnings over the next several weeks. Those will be the clues for broader market direction this summer.

As of this writing, Todd Shriber did not hold a position in any of the aforementioned securities.