Drug and Healthcare Stocks to Buy for a Healthier Portfolio

Healthcare stocks have traditionally been a go-to sector for reliable returns through any economic and market conditions. The rationale is straightforward. The U.S. is a large nation filled with folks that are generally less than healthy, and the vast majority have employer-provided health insurance to pick up the rising costs. 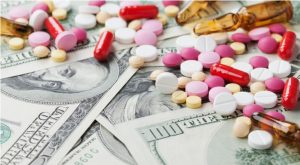 And for those who are less fortunate — those under- or unemployed — or those who are retired, there are additional entitlement programs from Federal and state governments, ranging from Medicaid to Medicare. For children, there’s the State Children’s Health Insurance Program (SCHIP). And of course, for now, there’s also the additional Affordable Care Act. Add in Federal employee programs, including from the Veterans Association, and there’s billions of dollars to pay for lots of drugs and healthcare.

Moreover, since few in the U.S. are direct-paying customers in the healthcare sector, there is little in the way of a market-check on prices and costs. This is a recipe for increasing spending and resulting revenues — and of course profits.

And it shows for the first reported quarter of 2019. Healthcare stocks of the S&P 500 index reported revenue gains on average of 13.7%, with earnings gaining 9.1%. That vastly outpaced the general averages for the members of the general S&P 500 Index.

And while there is lots of speculation over the pace of growth in revenue and earnings for the healthcare sector as compiled by Bloomberg and shown below, it is still expected to see gains into 2020. 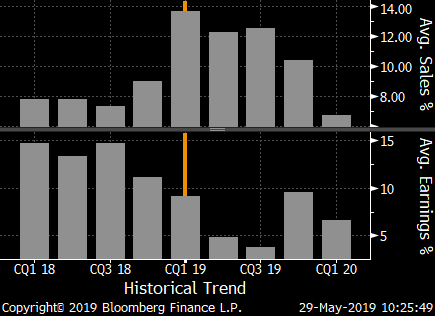 The big hindrance seems to come from concerns of the political rhetoric of the well-underway 2020 U.S. elections. On the Democratic side, there’s wild talk of national health insurance and even doing away with private employer-paid coverage. And in a limited amount in the Grand Old Party (GOP), there’s talk at least of doing something about drug prices.

Either way, investors seem to be spooked for now about the cushy market enjoyed by healthcare companies. But take a look at the many opinion polls from folks on the  left and right when asked directly about serious changes to the U.S. healthcare market. You’ll see the majority of folks don’t want what’s being pitched — particularly in terms of national health insurance.

My take is that the healthcare sector is a bargain right now on overblown fears. And with better revenue and earnings growth coming from a buoyant market for healthcare and drugs, the sector is a safer place for a healthier portfolio.

The key to the sector’s future success is that the U.S. is a nation that is aging and becoming ever less healthy. This isn’t a good mix for one of the leading economies of the planet. In a recent study by the U.S. Department of Commerce and the U.S. Census, by 2035, it is projected that 78 million folks will be 65 years or older. By that same year, those at or under the age of 18 years will be 76 million.

This will be a further significant change in the demographics of the U.S. It has traditionally been a younger nation with more healthy and able folks to produce more for the economy.

And it gets worse with it comes to the health of the overall population whether old or young. The Mayo Clinic recently released its extensive study of the health of the population and is saying that 3% or less are living a healthy lifestyle. This is not surprising. Just take a stroll around many neighborhoods around the nation and do some people watching. We are a nation of fatter people that don’t look like they could walk up a flight of stairs, let alone run up one.

The U.S. Center for Disease Control (CDC) just released a study saying 36.5% of the U.S. population is obese. This sets up the nation for more diabetes and all of the ancillary health effects of that disease. And then there is heart health and its complications.

Add in a higher poverty rate, which can lead to further health challenges for young and old alike, and other factors including infant mortality, and the nation doesn’t look too healthy.

And of course, last year we saw that life expectancies in the U.S. population stopped seeing improvements, with some segments dropping in life years. And the end of the line is where healthcare spending really ramps up to keep those older ailing alive a bit longer.

No wonder healthcare spending is big in the U.S. and climbing quickly. According to the U.S. Centers for Medicare and Medicaid Services (CMS) — healthcare spending increased in 2017 by 3.9% to $3.9 trillion or $10,739 per person. This represents 17.9% of the then gross domestic product of the U.S. (GDP).

And it is getting worse. The CMS projects that spending between 2017 through 2016 will continue to rise by an average annual rate of 5.50% reaching $5.7 trillion. And given projections for GDP for the period — that would come closer to 20% of the overall economy.

Now this isn’t good news for the U.S. population, but it does provide for a silver lining for us as investors.

Inside the model portfolios of my Profitable Investing, I have the overall market for healthcare synthetically invested in the Vanguard Healthcare ETF (NYSEARCA:VHT). This ETF provides a one-stop solution for this market. And over the trailing five years, the ETF has generated a return of 63.80% – which is above the general S&P 500 Index.

But moving on to the drug companies, I have the drug maker, Merck (NYSE:MRK), which continues to perform particularly well over the past three years with a return of 54.5%. Revenues continue to advance, with the most recent report showing gains of 7.8%. Operating margins are running fat at 19.6%, which contributes to a great return on shareholder’s equity of 27.4%. It has lots of cash and little debt, so it can easily support its pipeline of new treatments.

Then I have a peer with another drug maker, Pfizer (NYSE:PFE), which follows the success of Merck with a return over the recent three years of 33.9%. Revenues are a bit more tepid, with gains running at 1.6%. But its operating margins are better at 26.1% which supports a return on equity of 17.8%. And like Merck, Pfizer has lots of cash and little debt, so further investment in its newer products and services is easily supported.

MPW Stock Is a Favorite

These properties are leased on a net basis, in which its tenants pay insurance, upkeep and taxes. The operators run the facilities and pay rent month after month for years. The portfolio has expanded dramatically over the recent years, with only a small pause in the past year. But it continues to look to expand its portfolio with the right properties in an ever-expanding market. Hence its deal in Swiss Confederation.

Revenues are climbing, with gains running at 21.1%  per year on average for the trailing three years. And the funds from operations (FFO), which measures just the return rate from the cashflows from the property portfolio, is ample at 10.9%. That’s impressive for the REIT space. This contributes to an impressive return on its assets at 11% .

And the stock continues to reflect its performance as a company. Over the past three years, the stock has delivered a total return of 50.7%.

It is a disciplined company when it comes to debt and leverage, as its debt-to-capital is at only 47%. This provides the ability to easily service its current debts and provides eased access for credit to fund additional acquisitions.

The stock is also still a value proposition. The stock is valued at only 1.4 times its book value. That has been climbing significantly over the trailing year from only 1.1 times back in October of 2018.

But it isn’t just the price to book that’s rising, it’s the actual value of the assets. Over the past five years alone, the underlying book value per share has gone from $7.98 to a current $12.45. That represents an impressive gain of  56%. This is important as it shows genuine growth in the underlying company and not just the stock price.

The dividend is 25 cents per share and has risen 4.05% annually on average over the past five years. This equates to a current yield of 5.57%.

In addition, the dividend is tax-advantaged due to the Tax Cuts and Jobs Act (TCJA). That provides a tax deduction of 20% of the dividend distribution for U.S. individual investors.

Now I’ve presented some of my favorite healthcare stocks that are capitalizing on U.S. demographics and spending. Perhaps you might like to see more of my market research and recommendations? For more, look at my Profitable Investing. Click here to learn more: https://profitableinvesting.investorplace.com/

Neil George is the editor of Profitable Investing and does not have any holdings in the securities mentioned above.