Finding the Microsoft of Marijuana

What’s the first thing that comes to mind when you read that?

For most of us, including me, we start seeing red, flashing warning lights as we think “scam.”

And for good reason. The investment industry is replete with penny stock scam stories.

Basically, they involve a high-risk security with a small-market cap that’s trading for a relatively tiny share price — less than a few dollars, or perhaps even less than one dollar.

Some unscrupulous huckster begins pushing the stock to unsuspecting investors. When the stock rises high enough, this huckster unloads his shares, making a bundle, yet also sending the stock price plummeting, which hurts the small investor.

But it’s important to make a distinction — not all penny stocks are inherently “bad” and should be avoided like the plague.

For instance, take American Axle and Manufacturing. It was caught in 2008 when the recession nearly wiped out the American auto industry. In 2009, the stock price fell to $0.40. But it eventually turned the corner — today it trades around $12. That’s a 2,900% return.

Finally, take Monster Beverage. It was in 1995 that Monster (then Hansen Natural) closed at $0.69. Since then, the energy drink company has exploded, now trading around $63. That’s more than a 9,000% return.

Actually, let’s do one more. Ever heard of a small technology company called Microsoft? In 1986, most people hadn’t. Back then it was trading around $0.10 per share. Let’s say someone tipped you off to buy it. You were considering putting in just $1,000. But a well-meaning friend told you how scammy all penny stocks were. So, you did nothing.

Regular Digest readers know we’re incredibly bullish on the marijuana investment sector. This will likely be the most explosive investment opportunity that the majority of see will see in our lifetime.

Now, to date, we’ve already seen some monster returns from select marijuana stocks. But as we’ve told you before, we’re still yet to see the biggest gains. That’s because those will be coming after we see meaningful legislative reform from the federal government. That will be the watershed moment, after which, volumes of dollars will begin flooding the market, pushing up stock prices for those investors who were fortunate enough to have placed their bets ahead of time.

And that takes us back to the power of buying early.

Matt McCall is our resident marijuana expert, also the editor of the Investment Opportunities newsletter. While a great many other analysts are just now jumping on the marijuana bandwagon, Matt has been a leader in the space since 2014.

Given his experience and understanding of the industry, many of Matt’s early recommendations have soared hundreds, even thousands of percent.

There are a variety of ways to make money off this rare opportunity, and one of my favorites is smaller stocks. We have a chance to buy tomorrow’s leaders at bargain prices today.

In my Investment Opportunities service, I currently recommend five marijuana stocks that trade for less than $5 a share.

Within the marijuana industry, you can control a big block of 30,000 shares for less money than it costs to buy a used smartphone.

Now, I’ll be the first to admit that most penny stocks are total trash, but they are actually critical to the global economic system. Smaller companies have the ability to innovate in a capacity that larger stocks simply cannot. And if you think about it, almost all of the big, blue-chip companies started out as penny stocks at some point.

They were all small, fledgling businesses when they first started. Today, they contribute billions and billions of dollars to our economic landscape and employ millions of people all around the world.

Many of tomorrow’s big, blue-chip cannabis companies can be bought today for pocket change. They could be the quickest and easiest way to add tens of thousands … even millions of dollars to your brokerage account.

***But not all stocks will turn into the next Microsoft, so how do you invest safely with penny stocks?

That’s always been my concern as a conservative investor. I’ve had some horrendous investments in my day, which have left me with a healthy fear of losses.

So, if we were to invest in penny marijuana stocks, how might we do it more safely?

Well, first, we recognize that not every investment is going to be a long-term huge success, so we prepare ourselves mentally; and second, we invest responsibly — which means smaller positions across a wider number of stocks, rather than larger investment amounts in only a few stocks.

Matt refers to this as a basket approach:

When it comes to the marijuana mega-trend, our best strategy is to build a basket of stocks. You can look at this as if you are building your own ETF, but you don’t have to pay the fees and you aren’t stuck with a bunch of other stocks you don’t want to own.

***Here’s why the basket approach is powerful

Now, let’s say that a full 9 of them turn out to be duds. Full-on losers. And your $1,000 investment in each? Poof. Completely gone.

But the 10th investment is something special. Let’s say it follows the path of Monster Beverage, which we referenced earlier — growing 90 times over.

***Now, let’s look at the power of this type of gain within the broader context of a holistic portfolio

Diversification is one of the smartest things you can do as investor. You want your wealth spread over a wide array of assets and markets so that’s not too concentrated. This does two things: it protects your overall wealth from being destroyed if one of those assets collapses and goes to zero; two, it increases your odds your wealth is exposed to an asset class that might explode higher.

So, let’s say you have a $100,000 diversified portfolio. Some blue-chip stocks, some elite dividend-stocks, bonds, real estate, gold, exposure to quality foreign assets …

But you’ve allocated 10% ($10,000) of your overall portfolio to special opportunity investments, such as what’s happening right now with marijuana.

What would be the effect on your overall, holistic portfolio?

It would still post an 80% cumulative return over five years because of that one, home-run investment — even though 90% of your portfolio didn’t return a single dime … and even though 9-out-of-10 of your special opportunity subset stocks went to $0.

Now, compare this to a traditional stock portfolio …

While that’s great, that’s half of what your portfolio would have been with that one, monster-returning marijuana stock.

Here’s how it looks: 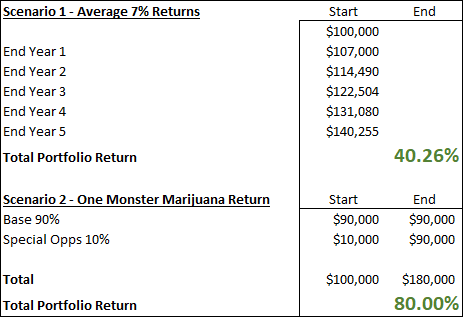 This just goes to illustrate the power of one or two, big returns, and the effect they can have on a portfolio.

It’s interesting, when we think of “risk,” we often think of putting too much money to work in investments that are more volatile. And while that’s true, there’s also a “risk” in not being willing to make make small, responsible bets with an appropriate amount of investment capital.

***The marijuana industry is still in its infancy, and the tomorrow’s leaders are today’s small companies

No one knows for certain who the Coca-Cola of the marijuana industry will be tomorrow. But we do know that some select companies will thrive to become market leaders, rewarding early investors will massive returns.

This is a huge opportunity to place smart, responsible bets on who those companies will be. Frankly, these investment opportunities don’t come along often, so it’s exciting that we’re being given this chance today.

Investors who sit this one out are passing on an opportunity to make a small fortune. We are witnessing the birth of a brand-new industry in America, an industry that has already proven to be incredibly successful and incredibly lucrative.

This is your chance to take part in the excitement.