If you’re an investor in beleaguered gaming stocks such as Electronic Arts (NASDAQ:EA) or Activision (NASDAQ:ATVI), it’s easy to curse Fortnite. The overnight gaming phenomenon has sucked up much of the oxygen from the traditional big-league gaming companies. But it’d wrong to say EA stock has only slumped due to the Fortnite factor. 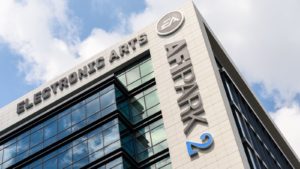 Electronic Arts has caused a lot of its own problems. Riding a wave of hit games, EA has seemingly become increasingly detached from its customers. It has pumped out sequel after sequel without much concern for what gamers actually want. And troubled new launches, such as the recent Apex Legends release, provide further evidence that EA has lost its way. Legends was hardly the only recent mistake either: remember the rollouts for Anthem or Battlefield V?

Bulls think that Electronic Arts has learned from its mistakes and is about to turn the corner. The bears, however, argue that EA stock will continue to struggle. Let’s take a closer look at what’s holding EA stock back.

EA has long used the slogan “challenge everything” on the loading screens of its games. Last year, fed up with EA, some internet users rebranded that slogan as “charge for everything.” Yet, despite the large quantity of paid downloadable content (DLC) and extras along with the highly controversial loot boxes, EA’s sales have stalled out.

In 2015, EA generated $4.5 billion in revenue. In fiscal year 2019, it brought in $4.9 billion. That’s just 10% revenue growth over the past four years despite the company going all-in on DLC and recurring revenue-based income streams.

The huge slump in mobile gaming largely offset big gains in PC and smaller gains in the dominant console division. Long-term owners of EA stock should be alarmed by this trend. Data from Newzoo’s global games report found that the gaming industry as a whole is growing at 11% per year. But mobile is driving almost all of that growth with its 27% annual revenue growth rate. By contrast, PC is growing at just 3% per year, and console at an even slower 2% annual rate.

EA is still doing well on console and PC for the time being. But that’s just not where the big money is set to be as the industry continues to evolve. If EA wants to get its stock moving higher again, it needs to show investors a credible mobile strategy.

One of EA’s recent errors was its launch strategy for Apex Legends. Investors had high expectations for the game, and EA stock dipped after it failed to put up numbers strong enough to match analysts’ sky-high assumptions.

But people shouldn’t be surprised. EA launched Apex with a free-to-play model, where they get revenue from incremental in-game purchases. That’s a good model — for mobile devices. But Apex didn’t launch for mobile. EA put the game out on platforms which still tend to do better with a traditional pay to purchase model while making it free initially.

Over time, Legends revenue should pick up. There will likely be a mobile version at some point, and the game is still getting going in key Asian markets now. Regardless, EA’s big response to Fortnite is off to a rather underwhelming beginning and streaming interest has already dropped off sharply. There’s still potential, but investors in EA stock had hoped for a lot more by now. And if things don’t turn around soon, EA may have another flop like Anthem on its hands.

There are more questions than answers for EA stock at this point. That makes it hard to get excited about buying Electronic Arts stock, even at this seemingly low point.

EA burned a lot of its customer goodwill with its loot boxes and other seeming cash-grab techniques to get more money from players. The season pass subscription model for Apex Legends looks like a step in the right direction, but Legends’ revenue has still plummeted anyway. We’ll see if EA can get it Legends back on track with Season 2, but so far, it’s not looking anything like a Fortnite killer.

In the bigger picture, Electronic Arts has a lot to prove. Will the move from physical discs to digital be a net plus or minus for the company? GameStop’s (NYSE:GME) stock keeps hitting new all-time lows, and is down 70% since January alone. Title producers have to wonder if GameStop will still be around within a few years. As we’ve seen with music and movies, it’s not necessarily a plus for the content makers when sales go digital; the digital stores tend to take a large portion of the overall revenue pie.

And what will be Electronic Arts’ strategy for mobile going forward? It’s perplexing decision not to rush a mobile version of Legends to market highlights the broader question: can EA get its mobile division revenues back on track? As mobile is by far the fastest-growing part of the gaming business internationally, success here isn’t optional.