Even the most even-tempered fans of the Star Wars franchise have to be excited. Walt Disney (NYSE:DIS) is finally making it possible to step into the fantasy world that’s only been seen on the big screen. 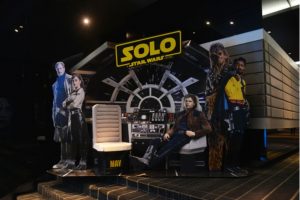 Owners of DIS stock, however, have to be taken back by the $2 billion expenditure. That’s the price to develop two identical Star Wars Lands at the company’s flagship theme parks in California and Florida. In contrast, the reboot of the series with 2015’s Star Wars: The Force Awakens only cost $245 million to make. However, the film drove more than $2 billion worth of ticket sales.

The math of movies just seems to make more sense for Disney stock.

There’s a method to the madness, though, which quietly justifies the seemingly exorbitant price tag. That’s valid even if we’re talking about two relatively small parts of a huge network of theme-park square footage.

Theme Parks Are the Better Bet for Disney Stock

The old adage, “you have to spend money to make money” is (for the most part) true. Walt Disney takes it to an extreme though, particularly when it comes to its theme parks. Here’s what keeps the company’s top brass — as well as investors — up at night: a $5.5 billion budget for Shanghai’s Disney park on top of the $500 million addition of an Avatar-themed area of the Animal Kingdom’s footprint on top of $2 billion worth of Star Wars-themes segments on both U.S. coasts.

The entertainment giant enjoys pricing power, to be sure. But most Magic Kingdom entries cost well more than the touted base price of $109 per person per day. With such a raw deal, consumers may find they’re not that interested in a two-hour romp through Tatooine. (That, for you non-Star Wars fans, is where the iconic Luke Skywalker character originates.)

Except, Disney doesn’t need everyone in the world to visit one of its theme parks in any given year. The 157 million guests the company courted last year was enough to drive $20.3 billion worth of revenue. That’s a 10% improvement on 2017’s theme park and resort top line.

What largely get lost in the discussion, however, is comparative scale. Simply put, the amusement park and hotel businesses are much bigger than the films segment. That’s the real key to understanding DIS stock.

Here’s the straight fact: movies remain the smallest of the company’s four core businesses. Go ahead and mention the relaunched Star Wars franchise that has since included two non-Skywalker related flicks, as well as a 20-plus collection of Marvel movies that kicked off with 2008’s Iron Man. Its studio arm generated just a little less than $10 billion worth of revenue last year. That’s true even with a 19% year-over-year increase thanks to a couple of hit films.

Licensing? Nope. Last year’s consumer products and interactive media was only worth $4.6 billion in sales last year. Notably, that figure was down 4%.

Operating margins are about the same for all four units, the fourth of which is also the biggest: media networks or television. It did $24.5 billion worth of business last year despite ESPN’s woes and an ongoing cord-cutting movement. The unit also turned $6.6 billion, or 26.9% of that amount into an operating profit. Compare that to the 22% margins for its parks and resorts business.

Movie margins are higher at just under 30%, to be fair. However, annual consumption rates limit the number of new releases. Plus, producers/providers like Netflix (NASDAQ:NFLX) and even Amazon.com (NASDAQ:AMZN) are bypassing an overwhelmingly crowded box office. Therefore, it’s getting tougher and tougher to encourage movie fans to shell out an average of $9 per flick.

All told, theme parks and resorts account for 34% of the company’s sales, and 28% of its profits. Making more movies nor television programs won’t help the Disney stock price.

Instead, Disney’s best growth engine and best return on investment, believe it or not, is theme parks. This should prove particularly true now that the multi-movie Marvel saga is winding down.

Don’t misread the message. Of all the Disney arms, the one most vulnerable to a true economic headwind is its theme parks. Consumers tend to view television and even over-priced movies as relatively good value. In contrast, a four-figure or even five-figure family trip to a Disney park is practically impossible during a recession.

In the absence of such a headwind, though, the heavy spending on new parks and attractions is actually the most appropriate way to boost the value of DIS stock. And with Disney’s on-demand streaming platform still lined up for launch later this year, the entertainment behemoth will become even better shielded against an economic downturn.

Shelling out big bucks for new attractions may not be a reason in and of itself to buy DIS stock. Still, it certainly doesn’t dent the bullish case.