Shares of Plug Power (NASDAQ:PLUG) have been on fire this year, rising more than 85% so far in 2019. Is PLUG stock enjoying a temporary high or is this sub-$5 “penny stock” poised to climb further?

Fortunately, investors can use technical indicators in a case like this. At least, that’s what I would recommend doing instead of buying PLUG stock blindly and hoping it delivers huge returns. Charts can do more than help predict price targets. They can also help determine the level of risk investors are taking and the prices at which they should buy stock.

Let’s explore the charts of PLUG stock a bit first, then discuss some of the fundamentals that kicked PLUG stock price  into overdrive at the start of the year. Too many investors ignore either the fundamentals or the technicals. Blending them together often creates a more well-rounded investment thesis and helps identify superior opportunities. 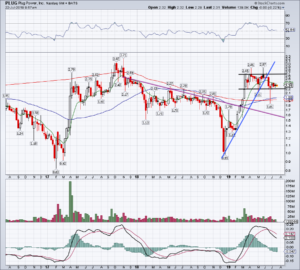 PLUG stock put together a robust rally off its December lows, but lay dormant for most of January. That changed in February, when PLUG stock price began climbing, rising from $1.35 to $2.65 by mid-March. Since then, PLUG stock price has been moving between its $2.20 support and its $2.65 resistance.

These levels have set up a great trade between the range support of Plug Power stock and its range resistance. Nimble short-term investors can buy PLUG stock at its support and sell into its resistance. This trade has been working for months now. However, it’s bound to end eventually, and that will occur when the range breaks.

If PLUG stock eventually  breaks out over its resistance or breaks down below its support, traders can bet on PLUG stock continuing the trend.

Meanwhile, investors can buy PLUG stock and use a stop-loss on a close below $2.20. Or they can wait for a move over the ten-week moving average and then buy the shares. PLUG has been below the ten-week for six straight weeks. But once PLUG stock exceeds that level, the shares can explode higher.

As you can see, the charts aren’t setting up all that badly for Plug Power stock. But let’s be honest: a stock does not trade for $2-and-change if there aren’t some concerns or issues about it. Granted, there are always one or two names that could be the next Advanced Micro Devices (NASDAQ:AMD) or Monster Beverages (NASDAQ:MNST). But all things being equal, we need to value PLUG stock based on its current fundamentals.

Plug’s cash flows are improving, although both its operating income and free cash flow are still negative.

That said, PLUG is growing. Analysts, on average, expect its revenue to increase more than 25% this year to $231.3 million. The average top-line estimate for 2020 calls for an acceleration up to 32.7% growth and revenue of about $307 million.

Of course, all of this is predicated on the analysts actually being right, even though more times than not, that’s not the case. For those who want stronger fundamentals and less volatility, they should look elsewhere. For believers in PLUG stock, wait for the charts to confirm the beginning of a rally.