How to Play Spotify (SPOT) and Netflix (NFLX) Stock Today

It’s no secret that more and more of us are in love with our streaming entertainment from Netflix (NASDAQ:NFLX) and Spotify (NYSE:SPOT). But for today’s investors it’s time to subscribe to a pairs trade in NFLX stock and SPOT, where emerging trends on the price charts are taking center stage for bears and bulls. Let me explain.

Once again, it’s that time of year where corporate confessionals are taking the spotlight. Citigroup (NYSE:C), Bank of America (NYSE:BAC) and JPMorgan Chase (NYSE:JPM) are stealing much of the early headlines with a bevy of earnings reports this week out of the financial sector. But banking stocks are far from the only show in town.

Streaming video on demand or SVOD giant NFLX reports Wednesday night. And not terribly far behind, Spotify, the world’s largest online music platform will release its results later this month.

For NFLX stock, consensus views compiled from 40 investment firms are forecasting profits of 56 cents compared to year-ago results of 85 cents. Sales are expected to grow to $4.9 billion from 2018’s revenues of $3.9 billion. On July 31, when Spotify reports, 27 analysts expect the company to whittle down last year’s quarterly loss of $2.57 to 46 cents per share. Meanwhile, sales are estimated to grow from $1.5 billion to $1.8 billion.

Whether results from Netflix or Spotify will stray, good or bad, isn’t known of course. Still, price action has been known to lead publicly disseminated information. And with earnings acting as a catalyst for continued momentum, subscribing to a pairs trade in emerging bearish and bullish trends in NFLX stock and SPOT looks like a good tactic today. 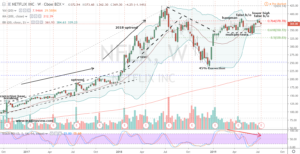 There are potential reasons to be bearish on Netflix beyond headlines of password sharing problems or competition from Apple (NASDAQ:AAPL), Disney (NYSE:DIS) and others spending billions on original content to uproot Netflix’s dominant SVOD position. The concern is the NFLX price chart.

Five months of lagging, high-level lateral work and two failed attempts at breaking out of the base locked in-between key Fibonacci levels doesn’t look good for Netflix bulls. Backing that worry, NFLX stock’s stochastics has been bearishly diverging during the pattern’s construction and is currently setting up for lower prices in shares.

NFLX Stock Strategy: With NFLX stock confirming a lower pivot high within the base, shorting NFLX stock today looks compelling. But given the close proximity of earnings, I’d go to the Netflix options market and use a below market bear put spread to minimize and limit risk while allowing for out-sized profits from an emerging and much larger corrective move. 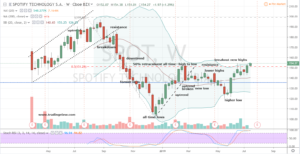 Shares of SPOT stock have been anything but music to the ears of most investors relying on a buy-and-hold strategy. One of last year’s hot IPO’s, SPOT came under pressure a couple months into its life as a publicly traded company and continued to make new lows and lead the market lower during 2018’s broad-based correction.

But 2019 has been a solid one for Spotify with shares up about 30%. What’s more, Spotify’s technical fortunes just turned for the better. This week, shares of SPOT have narrowly broken out to new relative highs above resistance. The price action on the weekly chart points to an emerging uptrend in a down, but far from out leader in today’s world of music.

SPOT Stock Strategy: Ideally, I’d like to see stochastics not positioned in overbought territory. But as a stock well-suited for momentum, overbought conditions can easily beget more of the same. And with earnings still a couple weeks out, buying SPOT stock today and legging into a bullish protective strategy like a married put in front of the report is how I’d look to play Spotify.

Disclosure: Investment accounts under Christopher Tyler’s management do not own positions in any securities mentioned in this article. The information offered is based upon Christopher Tyler’s observations and strictly intended for educational purposes only; the use of which is the responsibility of the individual. For additional options-based strategies, related musings or to ask a question, you can find and follow Chris on Twitter @Options_CAT and StockTwits.