As one of the world’s premiere chipmakers, Intel (NASDAQ:INTC) naturally attracts significant attention from market participants. However, this period draws more eyeballs than usual.

It’s not only about the company’s upcoming second quarter of 2019 earnings report. Rather, it’s whether the semiconductor firm has finally addressed its challenges to justify taking a shot at Intel stock.

Understandably, many investors are not convinced with INTC stock. In Q1, the chipmaker delivered a beat on both per-share profitability and revenue. Ordinarily, such results would spike the Intel stock price. But that’s not what happened, primarily due to management disclosing a rather disappointing guidance for the rest of the year.

For one thing, Intel didn’t see a “clear path to profitability” in the mobile 5G space. Essentially, this move gave rival Qualcomm (NASDAQ:QCOM) significant leverage in the next-generation telecommunications sector. Just as critically, Intel lost credibility with its core customers. For instance, Apple (NASDAQ:AAPL) desperately hoped that Intel could provide a 5G solution because it has a poor relationship with Qualcomm.

Failing your enterprise clients is a surefire way to ruin your reputation. Thus, I can’t blame the markets for taking down the Intel stock price a few notches.

Secondly, the competition smells blood. Of course, I’m mostly referring to Advanced Micro Devices (NASDAQ:AMD). A perpetual runner-up, AMD has finally taken Intel to task for its many errors. Now, AMD has the chipset portfolio to compete with Intel on laptop PCs, data servers and enterprise-level businesses. With the rival bringing attractive pricing and top-notch products to the table, INTC stock appears incredibly troubled.

Naturally, folks may wonder if they should take the obvious trade: dump INTC stock and get on board AMD (or another upstart rival)? Although the narrative doesn’t appear compelling for INTC, I believe that shares offer an ideal contrarian investment.

Generally speaking, both the investor and the techie community are heaping the love on AMD. I get it. Most folks love a good underdog story, and AMD is it. Plus, the company has a rabid following that is difficult to explain.

If you want to start a verbal tussle, say something negative about AMD. If you want threats to your safety, talk positively about Intel stock in the same breath.

But this scenario is ripe for going against the grain. Despite Intel’s reputation as an established stalwart, it still has a viable growth narrative. For example, Q4 2006 to Q1 2019, the correlation coefficient between corporate revenue and INTC stock is 87%. Even under a more recent comparison from Q1 2014, the correlation remains strong at 82%. 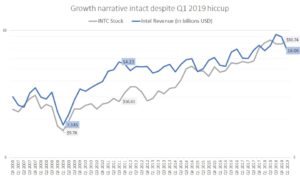 What am I saying here? As revenue increases, so too does the Intel stock price. And it’s doing so consistently, meaning that this investment is rational: the technicals largely trade on the fundamentals.

However, when the price action dips significantly as we saw following the Q1 2019 earnings report, I believe contrarians have an opportunity to profit. Mainly, I think this because the bad news is baked into the Intel stock price.

Sure, the company has suffered some embarrassing internal and operational gaffes. But to be perpetually bearish on INTC stock doesn’t really make sense. We’re talking Intel here. If anything, they have the resources to aggressively reclaim lost ground that other competitors do not have.

Another factor to consider is that AMD may have matched Intel in terms of chip performance and capabilities. However, that’s just one component. As a significantly smaller outfit, AMD doesn’t have the bandwidth to take down INTC comprehensively.

For instance, look at the PC market. Intel’s delays in distributing its 10-nanometer chips have opened the door to AMD to steal segment share. However, AMD is only able to provide the chips themselves.

But the PC market is much more than just processors. As the larger company, INTC offers related components to its enterprise clients, such as Wi-Fi chips and NAND flash. It also builds platforms so client manufacturers can maximize the potential of their PC products.

In other words, Intel is too deeply embedded within the broader tech market to simply unseat. Therefore, I feel confident that Intel stock can rise from its present (and likely temporary) challenges.