Investors Are Wondering What Has to Happen for Roku Stock to Hit $200?

We are living in an age of hyperbole. But when did Stephens analyst Kyle Evans said Roku (NASDAQ:ROKU) could triple over the next five years, he got my attention. To be honest, he had me at $84, his 12-month price target of $84 as he initiated coverage of ROKU stock with an overweight rating. 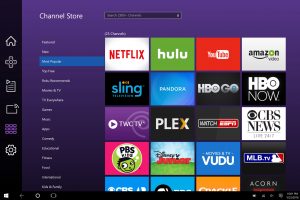 And while that target is 22% above FactSet’s $69 average and 29% higher than current levels, as Barron’s noted earlier this week, the thought of the Roku stock price to $200 in five years got me wondering. What would it take for the streaming set-box maker achieve an annualized total return of 25.4%?

It’s not a ridiculous projection — Amazon (NASDAQ:AMZN) has a five-year annualized total return of 45.7% — but it would require that the streaming company execute at a very high level.

In my most recent article about Roku in early April, I suggested that its shares could hit $80, perhaps even $100 this year, even though it had already gained more than 100% through the first three months of 2019.

Since that April 5 article, like clockwork, Roku stock has gone sideways. That’s okay, though. Stocks rarely go up in a straight line, and it’s already delivered substantial gains for shareholders nearing the midway point of 2019.

If you bought Roku toward the of 2018, I hope you didn’t sell because like the Stephens analyst. I believe that good things lie ahead for the Los Gatos, California-based company. And it all comes down to advertising.

“We believe there is real value, mostly still unlocked, in its ability to provide aggregation, discovery, and management solutions to the consumer and monetize this highly strategic position with advertisers and content providers,” Evans told clients.

Roku acts as a conduit between the content providers and their end-user customers. By bringing the two groups together using the Roku platform, it’s providing a convenient way for advertisers to reach those viewers. By doing so, it’s able to generate significant revenue growth.

As long as it continues to do that, Roku’s stock price will be in triple digits before you know it.

The Earnings Come Out

Although a lot of investors focus on average revenue per user (ARPU), I’m more concerned with the number of active Roku accounts and the number of hours viewed by those active accounts. If both of these are rising, ARPU is likely to be higher as well.

Roku beat analyst expectations with yesterday’s first quarter earnings, reporting revenue of $207 million versus the Street’s $190 million estimate. The company lost 9 cents a share, but analysts had expected that number to be almost three times that much, at 26 cents per share.

But since we’re focused on what users did, there was a 40% YoY jump in active user accounts and total streaming skyrocketed by 74% to 8.9 million hours in the first quarter. ROKU stock popped 6% in aftermarket trading.

With Roku adding more than 25 premium subscriptions to the Roku Channel including Showtime and Starz, that jump in active accounts didn’t surprise me.

How about those ad sales that I noted earlier are key to Roku’s future? The company’s ad sales business posted revenue of $134 million, up almost 80% YoY. Even device sales topped estimates, increasing 18% year-over-year.

A while back, Roku said it anticipates revenue of $1 billion by the end of 2019. As of yesterday’s close, Roku’s current market cap is $7.36 billion. That’s about $254 per active account. To get to a $200 share price, based on 110 million shares outstanding and a $22 billion market cap, Roku must get to north of 82 million active accounts. To be successful, Roku’s got to increase the number of active accounts by at least 25% a year over the next five years.

Another way to look at this is to consider ARPU.

In 2018, it increased ARPU by 30% to $17.95 on a trailing 12-month basis. Roku calculates ARPU by dividing the average number of active accounts in a quarter and the average of the four preceding quarters by its platform revenue. Currently, platform revenue accounts for 56% of its overall sales and is rising.

As long as Roku keeps pushing active accounts and streaming hours higher, I believe ARPU will take care of itself.

The Bottom Line on Roku Stock

If you can’t handle volatility, Roku stock is not one for your portfolio.

However, if you want to own a pure-play streaming company that can more than handle Jeff Bezos and Tim Cook, it’s definitely worth owning ROKU stock for the next five years.