IRBT Stock: iRobot Stock Is a Risky Play Prior to Its Earnings Report

Earnings season is always a stressful time for both equity-issuing companies and stakeholders. However, it’s no hyperbole to say that for iRobot (NASDAQ:IRBT), this is a do-or-die moment. As you likely know, the company specializes in the Roomba brand of automated vacuum cleaners. Undeniably, the technology is compelling. However, that message hasn’t convincingly carried through to the investor, with iRobot stock taking a beating several months ago.

And here’s one of the tricky elements about gambling on this equity. In late April of this year, management disclosed the iRobot earnings report for the first quarter of 2019. While the company delivered a per-share earnings beat of 78 cents (versus a consensus estimate of 71 cents), it badly failed against revenue expectations, sending IRBT stock tumbling.

How bad was it? The robotics firm racked up $237.7 million, which was a 9.5% improvement year-over-year. However, consensus estimates called for sales of $251 million, so that was a 5.3% negative surprise. Thus, I’m not taken aback that the markets punished iRobot stock. After all, iRobot is a growth name. Any time that narrative experiences disruption, will almost always produce ugly results.

Therefore, I go back to my beginning point: the upcoming iRobot earnings for Q2 is truly a do-or-die moment for IRBT stock. Everyone will focus on whether management can get the growth curve back on track. If not, watch out!

So, how likely is it that iRobot stock will witness a critical beat? Let’s take a look at the finer details:

Robust Revenue Growth Is a Must for iRobot Earnings

But first, covering analysts expect iRobot earnings per share to come in at 4 cents. This is near the lower end of estimates, which range from a loss of 7 cents to 22 cents. In the year-ago quarter, the company delivered 37 cents per share against an 18-cent target.

Although a dramatic decline year over year on paper, investors don’t necessarily need to panic on this metric. Operating expenses have ramped up recently due to investments in sales and future products. As iRobot stock is a growth equity, the underlying company must make outlays to stay relevant and ahead of the increasing competition.

But it’s the revenue target that has folks anxious about iRobot stock. Consensus calls for $267.9 million, which is slightly near the bullish end of the estimate spectrum. This ranges from $266 million to $269.5 million. And if the company hits consensus, it would represent a sales growth rate of 18.4%.

Now, we’re back at the original question: can revenues deliver the goods for IRBT stock?

Historically, it’s very possible that the company can get their stuff together. Sure, the Q1 2019 sales miss was ugly. But even factoring this in, the average YOY revenue growth rate since Q1 2017 is 26%. 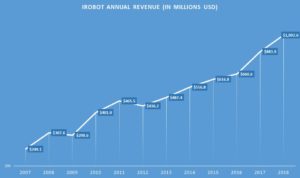 Moreover, iRobot’s annual income has exploded upward in 2017 and 2018 following some ho-hum years. That signals to me that consumers are interested in the company’s products. Therefore, Q1 2019 could have been a blip.

Then again, sales growth for Q4 2018 and Q1 slipped into low double digits and single digits, respectively. It’s a conspicuous decline which invites some questions.

Seeing that the financials give us some mixed messages, I’d like to consider the broader fundamentals for iRobot stock. Essentially, do people really want the company’s products?

On one hand, I can understand the Roomba’s appeal. Although it doesn’t climb stairs or clean curtains or upholstery, it does legitimately vacuum floors on its own. And just the fact that it can save families time while they go about handling other business is incredibly attractive.

After all, time is money, and Roomba saves time.

But on the other hand, consumer reports indicate that the Roomba isn’t very effective. Where the technology is now, the product is more gimmicky than useful. With the limitations inherent in a small, automated vacuum cleaner, users might end up getting a standard vacuum instead.

Still, it’s hard to determine consumer behavior. Sometimes, people just buy stuff for no apparent reason. So then how should investors approach iRobot stock prior to Q2?

I’d stay on the sidelines. First, we still have issues stemming from the U.S.-China trade war that could impose incredible volatility on consumer sentiment. Second, I think it’s very telling that IRBT stock never really recovered following the Q1 disaster. At this point, it’s not worth gambling one way or the other.

Bryah and OM form JV to mine manganese in Western Australia