Long-Term Stocks: These are 3 Stocks You’ll Want To Keep Forever

Forever can seem like a long time when it comes to putting your money in a single stock but as Warren Buffet once said, his “favorite holding period is forever.” Investors often tell you that the best way to make money in the stock market is to buy and sell shares at the right time but this is not always the case. There are unique advantages to holding on to long-term stocks.

For one, you get to avoid capital gains tax and take advantage of future increases in the stock price.

Moreover, some companies’ core product or service is created to innovate and evolve with customers’ changing tastes, and will never go out of style.

As an investor, it’s important to look past a stock’s day-to-day volatility and identify the long-term value that the investment will bring to your portfolio. This will help you reap the benefits of its growth over a period of time.

If you’re looking to buy-and-hold-forever, here are three of the best long-term stocks to place your bets on:

Apple has been a dominant force in the tech space since the early 2000s and will continue to be one in the years to come. As a company built on the backbone of innovation, the tech behemoth works to constantly reinvent itself and stay one step ahead of its customers’ wants and needs.

At its inception, Apple relied on products like the iPad and iPhone to drive revenue and growth. However, the company diversified its portfolio to include services. While device sales still make up a large percentage of the revenue, Apple is also able to tap into its services like Apple Music, Apple TV+ and Apple News+ as an income stream.

In addition to the services built into the iPhone, the company created a slew of products like the Apple Watch and Air Pods that were gamechangers. Apple’s wearable technology is one of its biggest revenue drivers and increased by 22.5% ($6.3 billion) in the first quarter of 2020.

While innovative technology will keep Apple in the limelight for many years to come, the company’s financials are a massive advantage for investors. The tech titan maintains a cash balance of $192.8 billion on its balance sheet. This will help it sustain dividend payments and keep debt levels to a minimum.

Apple’s constant innovation gives the company a major competitive advantage. With a strong cash flow position and a line of best-selling products, this long-term stock is a keeper. 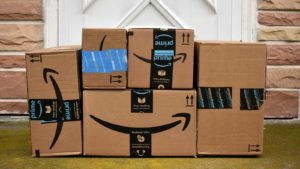 While the pandemic economy was dismal, to say the least, a bright spot in the otherwise dark business ecosystem was tech-giant, Amazon. With millions of people confined to their homes, Amazon’s speedy delivery services became a lifeline for people as they stocked up on essentials.

The surge in demand led to record-breaking sales numbers for Amazon this quarter. On Thursday, the company reported $88.9 billion in sales, which was 40% higher than the year before. Profits also beat analyst estimates and doubled to $5.2 billion. This came as a surprise to many analysts, given the capital injection of $9 billion dollars for warehouse expansion.

Although Amazon’s exponential surge was largely a result of online shopping induced by the novel coronavirus, the company’s core business model is strong.

The tech giant is looking to expand its footprint in cloud computing as more companies move online. Thanks to a number of successful partnerships and acquisitions, Amazon Web Services (the cloud computing arm of the business) saw a 65% acceleration in cloud services from the year before.

This growth will be bolstered by innovations in Amazon’s artificial intelligence devices.

Amazon’s versatile business model leaves a lot of runway for growth opportunities. This stock a “buy-and-forget” type of investment.

Hold on to this long-term stock and reap its benefits in the coming months and years.

Disney, a household name in entertainment, was vulnerable to the effects of the Covid-19 pandemic. While the fundamentals point toward avoiding this stock, Disney’s brand image and reputation in the entertainment industry are worth considering.

Disney, known for its innovation, proved critics wrong with its streaming platform, Disney+. The platform is a major revenue stream with a lot of growth potential. Analysts predict Disney+ will hit 150 million subscribers by 2025. Disney also owns media giants, Pixar, Marvel and Lucasfilm.

There is reason for long-term optimism about Disney theme parks. The company reopened properties in Shanghai and Florida (with restrictions) and shows it can operate parks during Covid-19.

Disney stock may not be a winner short term but long-term prospects for the company are fundamentally robust. On Tuesday, the company reported a surprising profit of 2.9 billion in Q3, driven by Disney’s online presence. This is a testament to the company’s ability to thrive in the longhaul.

It’s safe to say that Disney is a long-term stock that’s worth keeping.

Divya Premkumar has a finance degree from the University of Houston, Texas. She is a financial writer and analyst who has written stories on various financial topics from investing to personal finance. Divya has been writing for InvestorPlace since 2020. As of this writing, Divya Premkumar did not own any of the aforementioned stocks.