Okay, so it’s not quite the back-alley street-fight implied by that introduction, but our own Louis Navellier and Matt McCall have just made a friendly wager …

This was just a friendly disagreement around the office until our CEO, Brian Hunt, caught wind of it.

After hearing their respective cases, Brian felt the difference of opinion would be interesting and fun for our InvestorPlace readership, so he asked Louis and Matt to debate their positions live.

The result is next Wednesday’s “The Race to 40K” which will begin at 4 PM ET.

The loser of the bet will donate $5,000 to a charity specified by the winner.

Now, you might be reading this thinking “they’re both crazy.” After all, the news from yesterday is that the U.S. economy contracted at a record rate last quarter, with the GDP crashing at a 32.9% annual rate.

Beyond that, the Labor Department reported that the number of people receiving unemployment benefits increased to 17 million in the week ended July 18. It’s yet another sign that the jobs recovery might be losing momentum.

Despite this data, Louis and Matt are incredibly bullish on the growth prospects of their respective assets.

***So … why? What’s behind their bullishness?

We’ll save the fireworks for next Wednesday. But let’s do a brief, general review of their positions.

That’s no small challenge given our already-high valuations relative to earnings.

As of one week ago, FactSet (the go-to data analytics research company), reported that the forward 12-month price-to-earnings ratio for the S&P 500 is 22.2.

(Though FactSet analyzes the S&P instead of the Dow, you and I can use the S&P information as a loose proxy for the Dow.)

Now, tack onto those elevated valuations the 53%-price-gains Louis envisions …

Keep in mind, the analysts speaking to FactSet are projecting just a 7% increase in the S&P’s price over the next 12 months …

I’m a numbers guy. So, I never place a bet unless (and until) the numbers are in my favor.

I’ll tell it to anyone who will listen, and I’m happy to explain exactly why.

In his most recent update, Louis noted that at Wednesday’s event, he’ll be detailing “the three big reasons why stocks are poised to rise … and the ‘secret’ fourth reason that could send them soaring.”

He’ll also explain “why stocks are not overvalued right now — in fact, Dow 40,000 could underestimate the coming rally.”

Independent of the friendly wager, stock investors should join the event simply to get Louis’ perspectives on why there’s more strength in this market than many realize.

***What about the case for bitcoin?

To begin, Matt is also bullish on stocks. The difference is he simply believes that bitcoin is going to make a bigger move, faster.

Of course, for Matt to win the bet, that move has to be enormous.

Whereas the Dow has to climb roughly 53% for Louis to win, bitcoin has to explode roughly 256% higher (from where it trades at 11,227 Friday morning).

But the crypto might have just started that push …

I’m confident in my call. And I think it’s looking stronger by the day.

Bitcoin has just recently broken $11,000 for the first time in almost a year, and it has significant catalysts behind it.

Here’s a chart I shared just yesterday with my Ultimate Crypto readers showing the breakout:

Bitcoin is setting up for a lot more upside ahead.

On Monday, we highlighted the same move from bitcoin here in the Digest.

In addition to the breakout Matt showed above, we referenced an indicator called the “average true range” (ATR).

ATR is a volatility indicator. It shows how much an asset or security is moving up and down in a given time frame.

A study of market history shows that assets often make strong moves after going through periods of compressed price action and compressed volatility.

With that in mind, look at the ATR panel beneath bitcoin’s recent price action from our Monday Digest. Note how it’s beginning to turn north from a very depressed level. 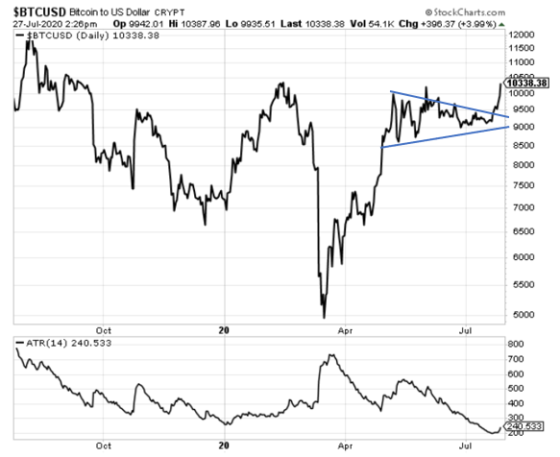 While this doesn’t guarantee a big move, it’s certainly a good start. Of course, there’s a tremendously-long way to go.

In any case, crypto investors will want to tune in next Wednesday to get Matt’s thoughts on the tailwinds behind bitcoin and the crypto sector.

Louis and I could both talk for hours about big investment opportunities. We promise not to go that long, but I’m really looking forward to this special event.

I think you’ll find it both a lot of fun and very educational.

***What do you think will happen first?

Email us your thoughts at digest@investorplace.com. We’ll select some of the varying positions for a Digest issue next week.

Louis and Matt have agreed to share the names of their top picks poised to benefit from these bull markets in stocks and cryptos. So, you’ll be walking away from the evening with market analysis and actionable recommendations.

To join us next Wednesday at 4 PM ET for the free event, click here to reserve your seat.

Bragging rights are on the table. Which camp do you fall into?