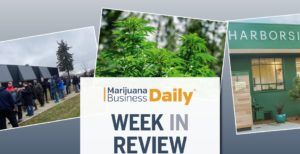 Michigan launches its recreational marijuana industry, California-based Harborside appeals a closely watched federal tax case, Brazil lays the groundwork for what could become one of the world’s largest medical MJ import markets – and more of the week’s top cannabis news.

Michigan’s first day of recreational cannabis yielded $221,000 in sales, with customers lining up outside the three Ann Arbor dispensaries that were issued licenses for the Dec. 1 event.

The three shops were the only ones in the state offering adult-use cannabis that day. Many municipalities have banned recreational sales.

MJBizDaily takeaway: Despite the handful of open shops, Michigan is expected to have one of the larger adult-use markets in the nation. Recreational marijuana sales are projected to range from $1.4 billion to $1.7 billion a year when the market reaches maturity, according to Marijuana Business Daily calculations. The state expects nearly a dozen retail locations to be open by Jan. 1.

MJBizDaily takeaway: Harborside’s case in U.S. Tax Court has been among the most closely watched in the cannabis industry, with huge, positive implications for state-legal businesses if Harborside were to prevail.

The retailer argues the tax should be based on income, not sales, citing the 16th Amendment of the Constitution, which gives the federal government the power to collect taxes based on “incomes.”

The cleanest resolution would be federal reform of 280E itself for cannabis-related businesses. But there’s been little progress on the issue in the U.S. Congress.

Health regulators in Brazil shelved a proposal to allow domestic medical marijuana cultivation but approved new rules to permit MMJ imports and distribution. The move could create one of the largest import markets in the world.

MJBizDaily takeaway: The positive: MMJ products won’t be required to undergo clinical trials. The negative: Companies eager to capitalize on this new opportunity will need to overcome restrictions and obstacles, including a ban on flower and a reluctance among physicians to prescribe cannabis.

The regulatory agencies – ranging from the Federal Reserve to the Conference of State Bank Supervisors – filed a joint statement notifying banks that they are no longer required to file suspicious activity reports (SARs) for businesses that handle hemp in accordance with applicable laws and regulations.

Instead, banks are expected to follow standard procedures and file SARs only if they are warranted.

MJBizDaily takeaway: The new guidance removes a major blockade to banking and financing for the hemp industry. But don’t expect banks to rush and serve hemp businesses.

Even with federal guidance clearing the way for hemp to be financed like other crops, banks might first need more confidence to determine whether a business produces hemp, not marijuana.

One county in California, trying to get tough with illegal cannabis farmers, enacted a $1,000-per-day fine for each unlicensed plant. Stanislaus County, to the east of the San Francisco Bay Area, is trying this approach because existing penalties weren’t enough to deter the illicit market, and local officials are hoping more stringent fines will do the trick.

MJBizDaily takeaway: Stanislaus County officials are likely overly optimistic if they believe fines will curb illegal growers. Law enforcement officials at the local, state and federal levels have been trying – and failing – for decades to stamp out the underground market, using all sorts of tactics, up to and including serious jail time. Still, the illicit market persists.