Inflation is coming … and that’s actually good for your stocks.

Yes, too much inflation is bad for the economy and your portfolio. At the same time, too little inflation — or disinflation — also is bad. This Fed has been fighting this battle for years.

What we want is mild inflation, a Goldilocks mid-range, if you will.

Given where inflation is today, we’re going to move into this Goldilocks sweet-spot range before we hit the dangerous, redline range.

This should be supportive for stocks looking forward … as long as inflation doesn’t catch like a spark in a tinder box, sending us blazing past the Goldilocks range too quickly.

Today, let’s dig into these details with the help of our technical analysts, John Jagerson and Wade Hansen, editors of Strategic Trader.

As part of this, we’ll highlight the indicator John and Wade use to give them an early warning about where inflation is headed. You’ll be able to use this yourself in the months to come.

***Some inflation is going to help your portfolio

In their Strategic Trader update on Wednesday, John and Wade start by saying, yes, we should always be worried about inflation — and disinflation. Though it should be easier for investors to deal with higher inflation levels brought on by excess stimulus and easy monetary policy than the alternative.

Of course, you may not expect this based on the media.

From John and Wade:

We have noticed that the financial press has recently picked up a new theme on the risks of inflation following the next round of stimulus ($1.9 trillion seems most likely) over the last few weeks.

The argument appears to be that inflation would be bad for stocks.

However, historically that hasn’t been true. Rising inflation and rising stocks tend to go together because they are both frequently caused by economic growth.

To John’s and Wade’s point, below, we compare the Pricing Inflation Index (in black) with the S&P 500 (in green) over the last 20 years.

You’ll see a loose similarity in their respective peaks and troughs. This isn’t because one is driving the other necessarily, but rather, they’re both reacting to the degree of economic growth. 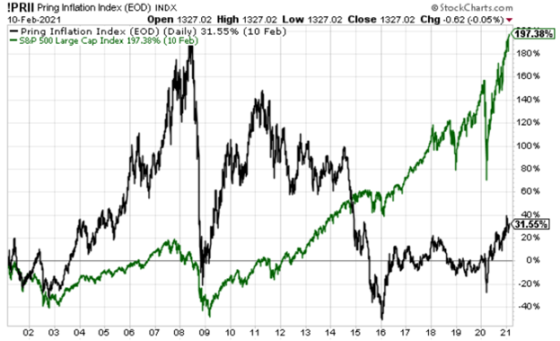 John and Wade note that the exception to this stocks/inflation similarity is when stagflation rears its head. This is a period of no economic growth but significant inflation.

Investors who lived through the 1970s remember this painful market condition. Fortunately, John and Wade don’t believe this is a cause for concern at the moment.

***So, what are we looking for exactly when it comes to inflation? Where’s the sweet spot?

Investors want to see prices rising in a “Goldilocks” zone of 2%-3%. Lower than that zone indicates low growth, and higher suggests the potential for volatility.

To see a historical precedent for this Goldilocks range, we can look back to the 1980s, a strong decade for stocks.

The average inflation rate during the 80s was 5.82%. But we have to factor in how the early 80s were bleeding off the high inflation of the 70s, when rates were 13%+. This skews the average.

If we focus on rates from 1983 on, we see a different picture — one more in line with the sweet spot rate between 2% – 3% as John and Wade highlighted. Take a look … 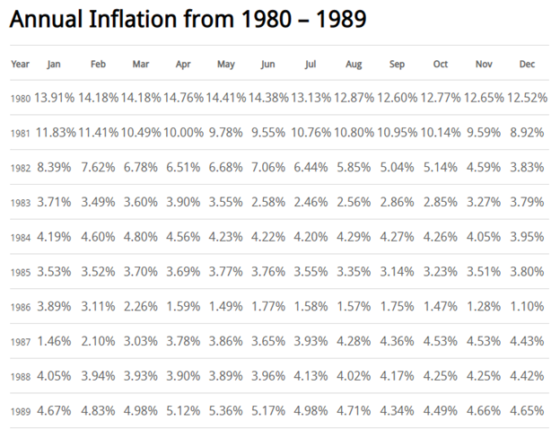 ***So, where are we today? And what are expectations looking forward?

Given the economic collapse from the pandemic, as well as oil prices falling through the basement, 2020’s inflation rate looks to be coming in at an anemic 0.62%.

But projections for 2021 are nearly quadruple that … 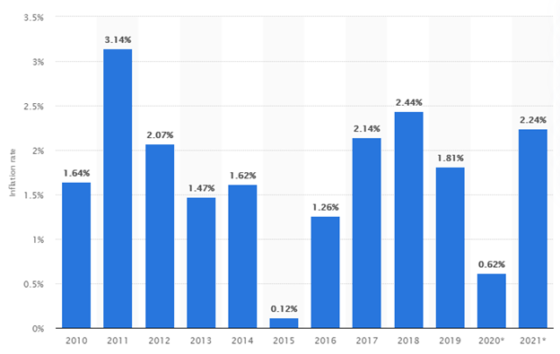 Remember, the Fed has stated that its target inflation rate is 2% (though some Fed members have said they’d feel comfortable with higher rates).

In August, at the Fed’s annual symposium in Jackson Hole, Wyoming, Chairman Jerome Powell announced a major policy shift for the Federal Reserve.

Calling it a “robust updating” of policy, Powell said the Fed will now allow inflation to run “moderately” above the 2% inflation goal “for some time.”

In short, the idea is that just touching 2% inflation won’t be enough. We’ll need to let inflation run above 2% for a while to make sure that the level actually holds.

But what exactly does that mean?

How much is “moderately” above 2%?

And how many months or years is meant by “for some time”?

We don’t know. Individual members of the Fed have presented different answers to these questions.

Furthermore, the Fed’s new goal is an “average” inflation rate of 2%.

But the average of what, exactly? Averages require fixed beginnings and endings.

Is the beginning when the Fed adopted this target rate in 2012?

Or since, say, 1980, which began the decade that broke the killer inflation of the 70s?

If we’re starting in 2012 and running through the next five-ish years, we’d need about 3.2% inflation.

If we’re going from the beginning of Powell’s tenure, we’d only need around 2.3%.

And what if we don’t want to let inflation run above 2% for all that long?

What if we only want, say, 12 months of above-2%-inflation? Or perhaps just two quarters?

If that’s the case and “average 2%” is still the goal, that means we’d need to let inflation run much higher, since we wouldn’t be tolerating it for a lengthier period.

The point is, our goal is vague at best. So, how do we know when we’ve hit it?

***Meanwhile, the bigger issue in all of this is “can we control inflation once we finally get it started?”

It’s just a small flame … until it sets the entire house on fire.

Philadelphia Fed President Patrick Harker seemed to grasp this when he said “It’s not so much the (inflation) number. … It’s really about the velocity.”

He went on to note that inflation “creeping up to 2.5%” is quite different than inflation “shooting past 2.5%.”

So, how can you track what’s happening with inflation?

If investors become more fearful of (inflation), we should get an early warning sign from Treasury yields, which rise with inflation and commodity prices.

As you can see in Fig. 1 below, the 10-year Treasury yield and oil prices are up 99% and 400%, respectively, since the market bottomed in late April, which is probably why investors are talking about inflation.

However, the good news is that both indexes are still well below their highs just before the COVID-19 pandemic crash.

For now, these are indexes worth watching, but we don’t see anything too worrisome yet. 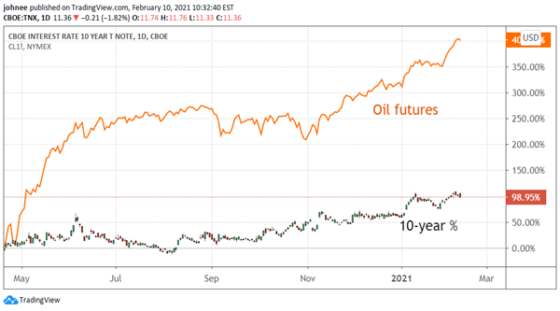 If you’d like to continue tracking this at home, check out TNX, which is the CBOE 10-Year Treasury Note Yield Index.

Wrapping up, if we can push inflation into the 2% – 3% and keep it there, it should present a good environment for stocks to continue marching higher.

But if we see inflation shoot past these levels, that’s when we’ll need to reevaluate the broader investment landscape, focusing on specific investments that would thrive in a high-inflation environment.

But for now, more inflation is good for stocks.

We’ll keep you up to speed here in the Digest.