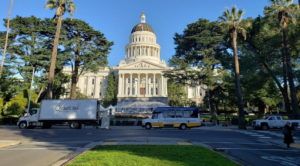 Count the California marijuana industry’s legislative agenda among the victims of the coronavirus.

Although the state Assembly reconvened on Monday after the entire legislative session was suspended in mid-March because of the pandemic, the state Senate won’t return until May 11.

And it’s clear there is only one major priority for Assembly members: handling the COVID-19 fallout.

That’s left cannabis industry advocates confronting the political reality that they’re unlikely to make much headway – if any – this year, especially with a pared-back schedule for lawmakers and a tight time frame for passing legislation in the coming weeks.

“If State Assembly members are pushed to choose five or six bills out of the 10 or 15 they usually run, it doesn’t look like cannabis is going to be at the top of their priority list,” said Jerred Kiloh, president of the United Cannabis Business Association.

“I don’t think any of us feel like a lot is going to happen this year.”

Not only that, but there are even serious logistical hurdles between the Assembly and Senate – such as their differing calendars – that make it less likely that bills such as AB 1948 or other marijuana industry priorities will be heard or voted on.

The coronavirus, in effect, has transformed the legislative session into one not about systemic progress for cannabis companies but about survival and maintaining the status quo.

“It really is a time of curtailing and managing expectations,” Mikalonis said, noting that cannabis has rightfully taken a “back seat” to the more immediate problem lawmakers must deal with: the coronavirus and the state’s response to it.

Mikalonis said the state is looking at a revenue shortfall that could easily run into the tens of billions of dollars, and part of the problem now is chronological.

The Legislature is required to pass a state budget by mid-June.

But because the coronavirus led the state to extend deadlines for tax filings until July, that means lawmakers won’t have real-world income numbers for the current fiscal year until sometime in July or August.

As a result, the entire budget might have to be redone come August, Mikalonis noted.

“What that means for cannabis is it remains to be seen how much cannabis gets dealt with in a June budget versus an August revision,” he said.

And the budget process – to which the governor often attaches what’s known as a “trailer bill” – has been the most common method for marijuana policy reform to get passed by the Legislature in recent years.

That’s what insiders such as Kiloh and Mikalonis are eyeballing as a last hope for policy changes this year, because stand-alone bills all face uphill battles.

But even a trailer bill remains up in the air, Kiloh said.

“There is some language we feel could go into the trailer bill, but we still haven’t gotten a firm commitment from (Gov. Gavin Newsom’s administration) that there is going to be a cannabis trailer bill,” Kiloh said, adding that “nothing is guaranteed” at the moment.

“It doesn’t seem like anyone is looking to do anything except maybe help the industry survive another year or so,” Kiloh said.

“The trailer bill is our best option to get through some of our priorities, and it really is just to make the industry sustainable.”

For more of Marijuana Business Daily’s ongoing coverage of the coronavirus pandemic and its effects on the cannabis industry, click here.