Do you want market-weight exposure with less chance of being on the losing side of the trade war off and on our price charts? Then look no further than Nasdaq heavyweight Microsoft (NASDAQ:MSFT) and get ready to buy MSFT stock. Let me explain. 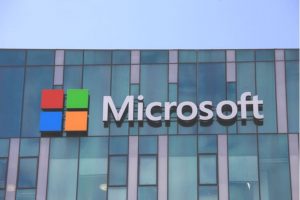 For more than a few years, if investors wanted above-average market returns and growth leadership from one of the market’s mega-capitalization stocks, there was no better bet than Apple (NASDAQ:AAPL).

But in today’s stock market it’s all about MSFT stock.

There was a time when Microsoft felt like the slow, out-of-shape kid waiting to get picked in a schoolyard game — the one that nobody really wanted on their team. The period largely coincided with AAPL stock’s heyday and legendary bull run out of 2009’s financial crisis abyss. Don’t get me wrong though, MSFT stock still rallied alongside the broader market and enjoyed outsized gains of its own.

Still, MSFT stock was certainly no Apple. In fact it took a gain of 300% from the March 2009 bottom through October 2016 before Microsoft even managed to claim new all-time-highs and shed its dot-com bubble high of $60 a share. But in today’s market, Microsoft has transformed itself into the world’s largest capitalization company. Much of this success is attributed to what I like to call a rebooted Microsoft Version 2.0.

In the past few years, Microsoft has successfully branched out from being simply, albeit a dominant a PC software company into leaner and meaner entity that’s winning in exciting growth markets like the cloud with its Azure platform or artificial intelligence. The numbers speak for themselves, most recently a month ago, when MSFT stock delivered another profit-topping report backed by solid growth prospects.

The performance is all the more impressive as it’s happened despite the trade war between China and U.S. and what’s become a definite drag on many diverse market heavyweights like Apple, Amazon.com (NASDAQ:AMZN), Boeing (NYSE:BA) and Intel (NASDAQ:INTC). And Microsoft’s story becomes even better in today’s market if investors simply look at the MSFT stock price chart.

It was during last winter’s ubiquitous market correction where MSFT stock really began to demonstrate its technical leadership. First, in a good sort of way, shares of Microsoft failed to match the broader indices’ descent into bear market territory. Specifically, its corrective move of 19% fell short of the 20% benchmark and compared favorably to the Nasdaq’s loss of around 23%.

Secondly, at their lows shares of Microsoft also managed to find support above its 38% retracement level. At the same time, the Nasdaq sunk deep enough to test prices from October 2017.

Now and as the Nasdaq has pulled back beneath its October highs after a fleeting and narrow capture of fresh all-time-highs, MSFT has been quietly and more constructively consolidating in a symmetrical triangle continuation pattern.

For traders agreeable with our bullish outlook, the recommendation is to put MSFT stock on the radar for buying above $130.50. This entry is marginally above the prior week’s bullish engulfing candlestick and looks to position as shares stage an upside breakout through angular pattern resistance.

As a continuation pattern breakout play, I’d estimate $150-$165 is the eventual price target. This price area more or less mirrors the rally from the December bottom to the April high.

Bottom line though or more aptly the squiggly price line, if an entry does trigger I’d also recommend exiting below $124. In the event this particular triangle doesn’t pan out as intended, closing the position at that point looks more than reasonable as far as exposure is concerned, both off and on the price chart.

Investment accounts under Christopher Tyler’s management do not currently own positions in any securities mentioned in this article. The information offered is based upon Christopher Tyler’s observations and strictly intended for educational purposes only; the use of which is the responsibility of the individual. . For additional market insights and related musings, follow Chris on Twitter @Options_CAT and StockTwits.