Stocks initially rallied on Friday, but pared a lot of those gains in the afternoon session. Thanks to a late-day surge, we saw a 0.46% gain on the Nasdaq today. Investors are trying to position themselves ahead of the weekend as the G20 summit is underway and President Trump is set to meet with President Xi to discuss trade. 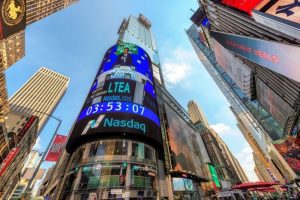 Further, the end of Friday’s trading session marks the end of the second quarter for the stock market. While it seems long forgotten, the markets are still trying to stabilize following the fourth quarter volatility.

From peak to trough, the Nasdaq fell about 20% in the fourth quarter. But it set up a wicked first-quarter bounce. The index rallied 16.5% in the first quarter and briefly hit new highs in the second quarter. With a wavering trade-war situation though, Q2 has been more of a digestion quarter, with the index up about 2%.

Where does that leave it for the second half of the year? 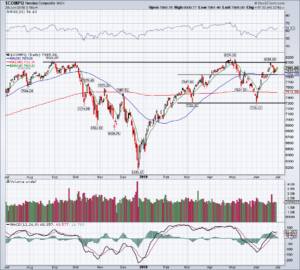 As much as I don’t want to say it, so much of how the index will do next quarter may depend on the trade war situation. I’m sick of it and so is everyone else. But if we get some progress toward a deal, semiconductors, memory makers and global economies can all see a recovery. This could pave the way for the Nasdaq to hit new highs sometime in the next 90 days.

If the trade situations worsens — perhaps with Trump ratcheting up more tariffs or with China trying to play the waiting game for the next U.S. election — then we very well could see some selling pressure.

From a purely technical outlook, the Nasdaq looks good. 8,100 has been resistance, but the sharp rally from 7,300 to 8,100 and slight pullback has the index looking primed for more upside. Unfortunately though, there’s more to consider than the charts.

If the trade situation worsens, I expect the Nasdaq to lose the 50-day moving average. If it does, a decline down to the 200-day moving average at 7,512 could be in the cards. Below that is range support near 7,300, which would mark a near-10% decline from the recent highs at 8,088.

Winners in the Nasdaq Today

The RealReal (NASDAQ:REAL) hit the public markets on Friday. Shares priced at $20 apiece, above its initial range of $18 to $19. Even then, the stock was able to maintain momentum, closing at $28.90 and up 44.5% on its first day of trading. The IPO market remains red hot, but investors are likely wondering if REAL will cool off a bit like Chewy (NYSE:CHWY), Slack (NYSE:WORK) and Fiverr (NYSE:FVRR) — all of which logged nice gains on Friday too.

Western Digital (NASDAQ:WDC) caught a big boost, rising 6.7% on more than two-times regular volume. Despite a bearish analyst call on Thursday, the stock is storming higher after a power outage at one of its production facilities in Japan. Analysts at Morgan Stanley — which has an equal-weight rating and $46 price target — said it shouldn’t have a big impact.

Losers in the Nasdaq Today

Cisco Systems (NASDAQ:CSCO) took a tumble on Friday, falling 3% at one point. While support is nearby, one can’t help but wonder if Micron’s (NASDAQ:MU) newfound momentum is bad news for CSCO. The company is a DRAM buyer, which has been under pressure for the past few quarters. While a rise in cost wouldn’t be a death-blow to Cisco, it could create a solid buying opportunity in the name on further weakness.

Apple (NASDAQ:AAPL) stock slipped about 1% on Friday on news that its chief design officer (CDO) Jony Ive is leaving the company to start his own company. Don’t worry, everyone. Apple will be a client of Ive’s new company. After 27 years at Apple and 23 years as its CDO, Ive has earned the right to call his own shots. Apple should still be okay too, given its powerful balance sheet.

Unlike many others in the biotech sector — which rallied 1.75% on Friday — Biogen (NASDAQ:BIIB) wasn’t feeling too hot. Shares slipped over 2% after the stock was downgraded to neutral by Piper Jaffray analysts.

Last but not least, there’s Roku (NASDAQ:ROKU). For a stock that’s still up 31% in Q2 and 195% for the year, the stock isn’t ending the quarter on a particularly high note. The stock is now about 15% off its highs and slipping almost 3% on Friday alone. News of a competing smart TV from Amazon (NASDAQ:AMZN) earlier in the week continues to hang over the stock. How long into Q3 before Roku shakes off this news?

Bret Kenwell is the manager and author of Future Blue Chips and is on Twitter @BretKenwell. As of this writing, Bret Kenwell is long AMZN, ROKU, NVTA and AAPL.

Making Money Or Helping People – Do You Have To Choose?