It was shaky action in the Nasdaq today. At first, the index rallied to new all-time highs, hitting 8,226. Then, it fell and closed lower by 0.08%. The rally came on more hints from Fed Chair Powell suggesting a rate cut is coming later this month. 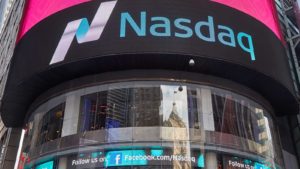 The market is now fully pricing in at least a 25 basis point cut to the Fed funds rate. If the rate doesn’t materialize, the stock market will surely sell off as a result. I’d expect tech to get hit extra hard under that circumstance. As it stands, markets are pricing in a 20% chance of a 50 basis point cut, which is up notably over the past few days.

Worth pointing out is that a majority of the market is preparing for that 50 basis point cut at the September meeting, with odds standing at about 56%. Further, there is a roughly 12% chance of a 75 basis point cut by then.

As fun as it is to talk about the Fed almost daily… it is the commanding topic on Wall Street at the moment.

However, earnings are set to pick up in the second half of the month, setting the stage for some big moves in tech and elsewhere. You know investors in the PowerShares QQQ ETF (NASDAQ:QQQ) are bracing for some action with FAANG set to report in a few weeks.

Heard at the Nasdaq Today

Microsoft (NASDAQ:MSFT) hit new all-time highs again, and drew in a new analyst in the process. Cowen initiated coverage of MSFT with an outperform rating and $150 price target. They argue that MSFT has positioned itself in the right secular growth markets, although the coverage is certain to draw some criticism of Cowen’s timing. I mean, up 35% so far in 2019 and this is when they start coverage?

In any regard, the target implies about 8.5% upside from current levels.

Bank of America analysts sent Snap (NYSE:SNAP) stock to new 52-week highs after they upped their price target from $12 to $17. They make the case that downloads of Snapchat are up more than 60% sequentially and year over year. If true, it could lead to better-than-expected user growth.

Take-Two Interactive Software (NASDAQ:TTWO) took a hit on the chin in early Thursday trading, but closed lower by “just” 0.54% after a downgrade to hold at Jefferies. The firm’s $115 price target is just below TTWO’s current price of $116.53.

News on the Nasdaq Today

Amazon (NASDAQ:AMZN) Music has reportedly seen its subscriber base rise 70% over the past year.

Apple (NASDAQ:AAPL) Music has also boasted strong growth with its service earlier this year, helping to drive its robust $10-billion-per-quarter Services unit higher. The rise in music subscribers for Amazon comes as little surprise, as consumers continue to gravitate toward Spotify (NYSE:SPOT), Apple Music, Amazon Music and other streaming services.

Biotech stocks took it on the chin Thursday. A likely decision from the White House is benefiting some groups in healthcare and hurting others. CVS Health (NYSE:CVS), Humana (NYSE:HUM), Cigna (NYSE:CI) and others benefited from the news — here’s how to trade Cigna’s big rally — while others suffered.

Gilead Sciences (NASDAQ:GILD), Celgene (NASDAQ:CELG), Bristol-Myers Squibb (NYSE:BMY), Biogen (NASDAQ:BIIB), Regeneron (NASDAQ:REGN) and others all took a hefty hit on high volume. Of the names above, BMY and REGN hit new 52-week lows in the session.

The question now becomes, will it be a one-day beating or is this just the start?

Last but certainly not least, Apple is reportedly gearing up to offer its higher-end iPhones in India. The idea of Apple tapping into a market with 1 billion consumers is certainly appealing to investors. That’s even as affordability in a country like India vs. the U.S. are quite different.

According to the report, the XR and the XS could hit regional markets throughout the country. Further, Apple plans to assemble the units in India. This keeps the company from having to pay high taxes on the import of these devices. Apple has just ~1% of the smartphone market in India, paving the way for potential iPhone unit growth going forward.

Bret Kenwell is the manager and author of Future Blue Chips and is on Twitter @BretKenwell. As of this writing, Bret Kenwell is long AAPL, AMZN, CELG.