After several straight sessions of declines, it looked like we would get a bounce in the Nasdaq today. However, late in the session stocks began to sink due to escalating tensions in the Persian Gulf. It’s got investors selling into the weekend and putting their worries on hold. 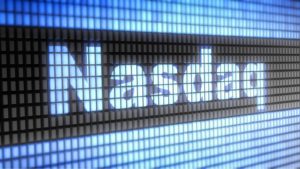 Where does that leave the Nasdaq now?

The Nasdaq looked like it was bouncing hard on a near-test of the 20-day moving average from Thursday. The morning price action in the PowerShares QQQ ETF (NASDAQ:QQQ) — which closely follows the Nasdaq’s action — looked like it might run back up to new highs. After all, Friday’s high of $193.83 wasn’t all that far from its all-time high of $194.19. 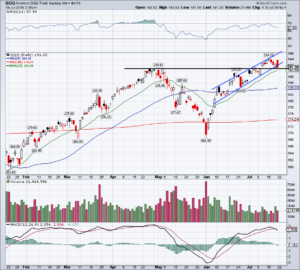 With Friday’s reversal though, it leaves the QQQ with a possible break below channel support (blue line). However, it’s still holding up over prior range resistance near $191. While the action is discouraging, investors don’t have much to fret so long as the QQQ is north of $191 and the 20-day moving average. Below these levels opens up the door to further declines, and obviously earnings will play a large role.

We heard from Netflix (NASDAQ:NFLX) on Wednesday and from Microsoft (NASDAQ:MSFT) on Thursday. But next week will be busy.

Microsoft (NASDAQ:MSFT) reported a top- and bottom-line beat, but the stock couldn’t muster much in the way of gains. The stock jumped over $4 per share and hit new 52-week highs, but it couldn’t maintain the gains.

Shares closed higher by just 0.18%, but investors have to be somewhat disappointed. Earnings blew past expectations and revenue of $33.7 billion came in more than $900 million ahead of consensus expectations. First-quarter guidance and management’s full-year outlook both came in ahead of estimates too. It was a strong report, despite the tepid price action.

Some investors are fretting over the slowing growth rate in Azure, but make no mistake, MSFT stock remains a powerful entity. The stock is still in an uptrend and commands the market’s highest valuation, maintaining north of $1 trillion.

Other Earnings From Friday

Chewy (NYSE:CHWY) doesn’t trade on the Nasdaq, but many consider it a tech play because it’s an e-commerce company. The stock looked like it was going to push higher and potentially breakout over downtrend resistance, but sellers knocked it back down. Now it’s flirting with a potential breakdown below its post-IPO gains.

Here’s the how-to-trade setup of the chart, along with Crowdstrike (NASDAQ:CRWD).

CRWD also reported earnings, but shares soared to new post-IPO highs on the move. The rally is quite attractive, given that it was putting together a beautiful wedge pattern. The company delivered a top- and bottom-line earnings beat and guided for better-than-expected earnings and revenue results next quarter.

Around the Water Cooler

Micron (NASDAQ:MU) always draws a lot of eyes, but it’s drawing extra attention on Friday. Shares climbed 1.9% on the day and closed at $45.52. The stock is pushing through a significant level between $44 and $45, a level the Top Stock Trades column flagged earlier this week.

After surging to new all-time highs earlier this week, Roku (NASDAQ:ROKU) stock was under selling pressure on Friday, falling 1.99% to $106.85. That’s despite news of Roku’s plans to expand first to Brazil and other global markets.

The company has been putting up robust growth numbers all across the board. Whether that’s streaming hours, revenue, platform growth, etc. It’s helped fuel the stock’s massive run from sub-$30 in late December to more than $100 currently. 90% of its revenue comes from the U.S. and unlike other streaming plays, Roku does not have to dump hundreds of millions or even billions of dollars into developing its own content.

Instead it’s viewed as the operating system for streaming entertainment, providing a low-cost solution for millions of customers to access dozens of streaming options. This could be a big opportunity for the company if Roku executes well.

Bret Kenwell is the manager and author of Future Blue Chips and is on Twitter @BretKenwell. As of this writing, Bret Kenwell is long AMZN, GOOGL, ROKU and SBUX.