Netflix Stock: How I Knew to Sell BEFORE It Got Crushed


Thursday was an awful day for Netflix (NASDAQ:NFLX) stock — probably its worst in eight years.

Worldwide, Netflix did manage a net gain in subscribers (of 2.7 million)…but only half as many as expected (5 million).

This has created some controversy on Wall Street about whether to abandon NFLX – one of the most popular stocks around. Morgan Stanley says Netflix stock is still a long-term buy; Wedbush Securities says that is “idiotic.”

But ultimately, NFLX was down 11% on the news, and that says it all.

This is, again, a significant reversal. Netflix stock had been chugging along just fine, prior to Thursday. And last month, we cashed out a 120% gain on NFLX in my Accelerated Profits service!

So, today I want to talk about how to know when to sell.

Our exit from NFLX was extremely well timed – but not because of any particular genius on my part. (Although I do like to think, after 40 years, I’ve learned a thing or two.)

It was because I know how to read the signs. And if the other so-called “experts” had taken a good, hard look at Netflix’s last earnings release – they might have avoided this, too!

Back in June, Netflix stock was a great performer. And in the previous quarter, U.S. subscriptions had gained 1.7 million! Overall, subscriptions were up 26% year-over-year. And earnings per share were up, too, by 18.8%.

“For the second quarter, Netflix provided weaker-than-expected guidance. As a result, analysts have slashed earnings per share estimates and are now looking for a 34.1% drop in earnings. Let’s take that as our cue to exit. NFLX is up about 7% in the past week, so if you bought NFLX at the time of my original recommendation, you’ll exit the stock with about a 120% gain. Sell NFLX.”

Analyst Earnings Revisions are a big factor in my Portfolio Grader system. And on Thursday, NFLX investors may have wished they’d heeded that warning. My guess is that a lot of folks “fell in love” with NFLX. But I don’t believe in falling in love with a stock. I’m a numbers guy…and when the numbers turn south, I get out. 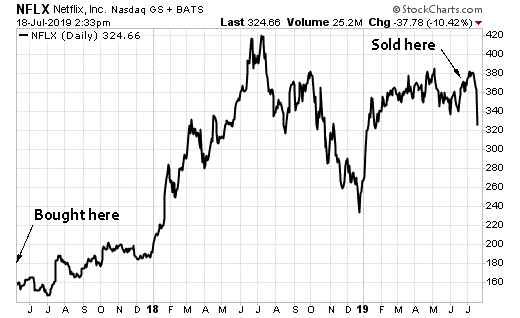 In January, we took profits in NVIDIA Corporation (NASDAQ:NVDA) for similar reasons.

NVDA stock is one of my favorites of recent years and had been a top performer for nearly three years. Demand for its graphics chips had skyrocketed – until it stumbled in the third quarter of 2018, when the company fell short of its sales forecasts.

The company guided below expectations as well, which is what really hit the stock.

As the share price grew more volatile and analysts kept lowering their forecasts for NVDA stock, I knew it was time to collect our winnings. So, in Accelerated Profits, we closed our position on a bounce for a whopping 166% profit. 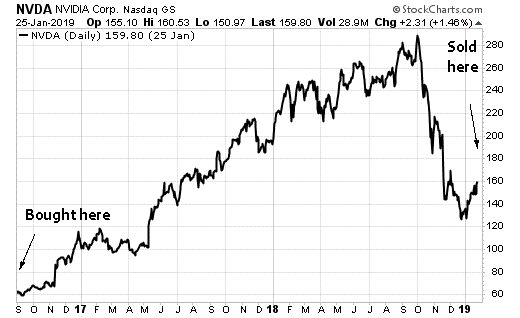 But to generate consistent short-term profits, we’ve found that a decline in fundamental indicators is a clear sign to move on, take profits, and focus on stocks with superior ratings.

Our system is very picky. It demands excellence from stocks. We don’t let our money sit in a stock with declining ratings when we know it can be deployed into stronger stocks. After all, I believe our money deserves the very best, and you deserve the very best, too.

Where I See the Best Opportunity Now

The investment potential in 5G wireless is huge; whoever controls 5G would essentially control the internet several years from now.

There are a lot of companies out there that are jumping on the 5G bandwagon, but it’s all about finding the right company that offers significant long-term potential.

I have found just that name. In my Growth Investor service, I recommended a not-so-well-known electronics company that is helping some of the big ones move into the 5G space.

To learn more, I strongly suggest you go here to watch my presentation on the huge technological shift going on at now. And if you sign up now, you’ll receive my #1 Investment for the Coming 5G Revolution absolutely free. It tells you absolutely everything you need to know about 5G and the best way to play it. Click here for the details.