Netflix Stock Might Have Plenty of Upside Ahead Earnings

Netflix (NASDAQ: NFLX) continues to trend towards yearly highs, ahead of its earnings report on July 17, after the market closes. There still are some exciting days ahead for Netflix stock.

And why not? Neither valuations nor debt levels matter because the streaming giant is buying up quality content to grow subscriptions.

Competitors are desperately rushing to bulk up its content to attract subscribers. Traders yawned after the news. The stock barely fell at all in recent months other than testing the $340 level at the 200-day moving average.

Netflix investors are betting that HBO Max, which launches in the spring of 2020 will not lure its subscribers away. Similarly, Disney may have a rich library of old cartoons and movies but it, too, may fail to beat Netflix.

The late entry by these firms suggests both Disney and AT&T will need to suffer losses for a few quarters at the very least. It needs to beat Netflix on subscription rates to take Netflix’s market share.

Fortunately, Netflix has a number of great TV hits. Stranger Things, The Crown, Orange is the New Black, and Black Mirror are only a few solid shows subscribers may enjoy.

On the movie front, I am Mother and Roma are some titles available on the service.  At worst, Netflix subscribers may sign up for HBO Max or Disney+ concurrently. And when they realize that Netflix is still the better option, they may cancel the second subscription.

Despite my confidence for Netflix holding up against the competitors, AT&T could stand a chance in growing and taking market share. With Friends and the DC Universe service rolled together, HBO Max could prove successful.

It has to be. AT&T delayed its streaming service until next year and has no room for a botched release.

NBCUniversal will yank The Office from Netflix in 2021 and Comcast (NASDAQ: CMCSA) will bring it back to its own streaming services. Though this service is another competitive threat for Netflix, Netflix subscribers could binge watch the show before it is removed.

If that happens, the viewership for the show will fall when Comcast takes it back.

Subscribers may very well keep paying the monthly rate as they wait for Netflix to release the fourth season.

Netflix’s global expansion continues to find success. The company is finding that the longer it has been in a territory like Europe, the better it understands its audience.

In the upcoming earnings report, investors may safely expect the company to report continued strength from global subscriptions growth.

In Q1/2019, Netflix benefited from scaling its business. Content and marketing spend grew at a slower pace than revenue, lifting margins.

Growing awareness for its brand and for hit shows like Stranger Things should lead to profit margin growth in the upcoming earnings report. Needless to say, a strong subscriber growth number will send Netflix back to yearly highs, if not new yearly highs.

Netflix forecast a 7% year-over-year growth in subscribers in the second quarter. Growth is more concentrated internationally, while price changes in the U.S. could slow the addition of new subscriptions. Still, the higher prices should help add to profitability.

Valuation and Your Takeaway on Netflix Stock

Netflix’s increasing rate of growth in international subscribers is what will get investors excited. It also makes the $419 price target, or an upside of 10%, seem too conservative a valuation. 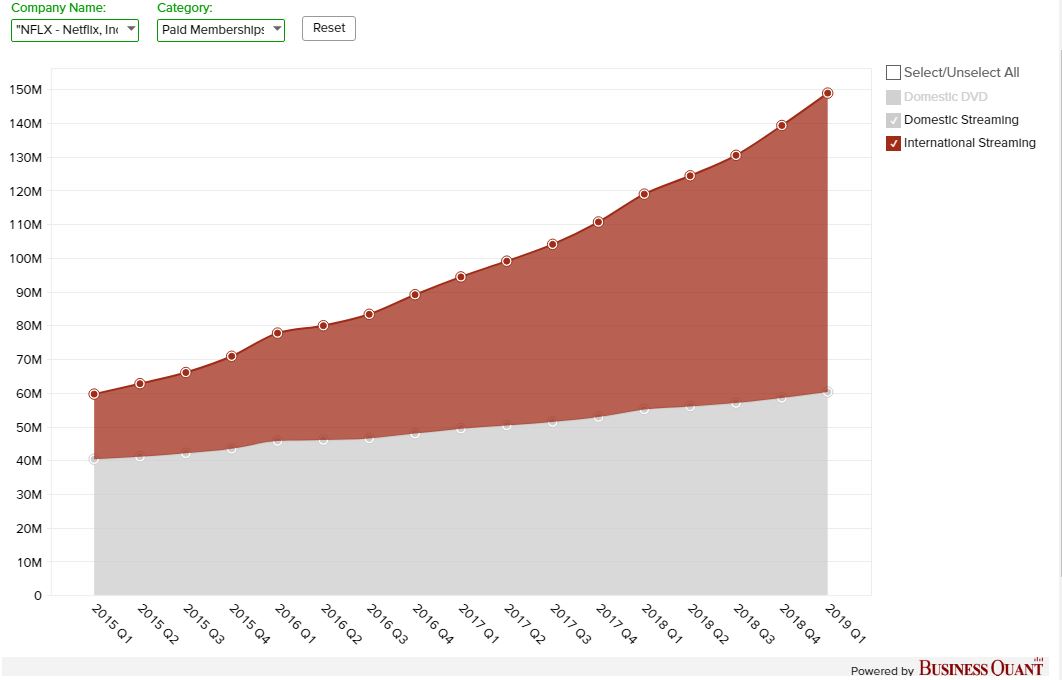 Conservative investors may prefer to wait for the stock to re-test the $340 – $360 low. A subscriptions growth rate miss might just send the stock lower. But if Netflix crushes estimates again, the stock may not end up dipping.