Global stocks, along with futures on the , and , took a hit from Friday’s sharpest U.S. stock selloff since January this morning. Oddly, safe-haven Treasurys and the weakened.

The opened 0.3% lower and extended the decline to 0.68%, heading for its most substantial two-day slide since early February. Miners and retailer shares dragged the benchmark lower. Technically, the index extended Friday’s violation of its uptrend line since the Christmas-eve selloff, with the 200 DMA below 370, making the March 8 trough the next major support. The 50 DMA approaches it from below. Will it cross the 200 DMA, triggering a golden cross, or will it find a steel ceiling, signaling a trend reversal? The RSI topped out. Also, the MACD saw the shorter MA cross below the longer MA for the second time after the highest levels since December 2016. However, that was a whole different set of circumstances, and the pan-European benchmark proceeded to climb another 8% before its first correction. 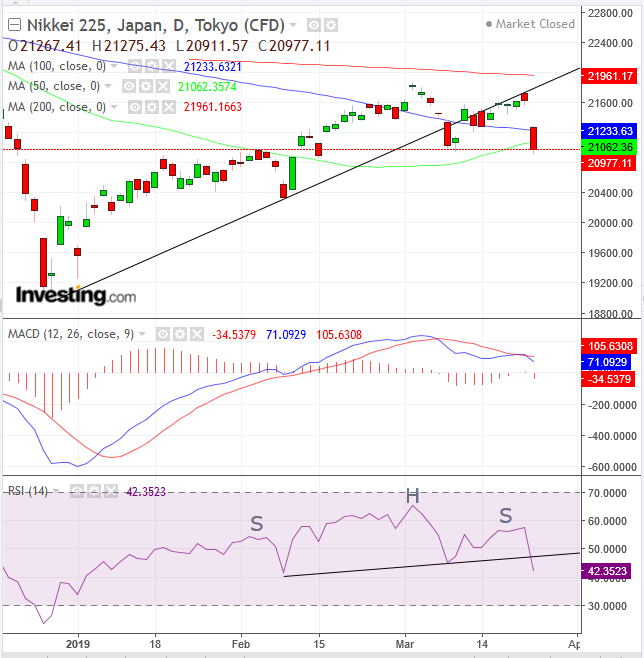 Technically, the price confirmed the resistance of the broken uptrend line since the December bottom, falling below the 100 and 50 DMA after the 200 DMA proved its resistance for the second time since earlier in the month. The RSI completed an H&S top and the MACD’s shorter MA found resistance by the longer MA. Most importantly, the price formed a lower trough, after yesterday’s lower peak. 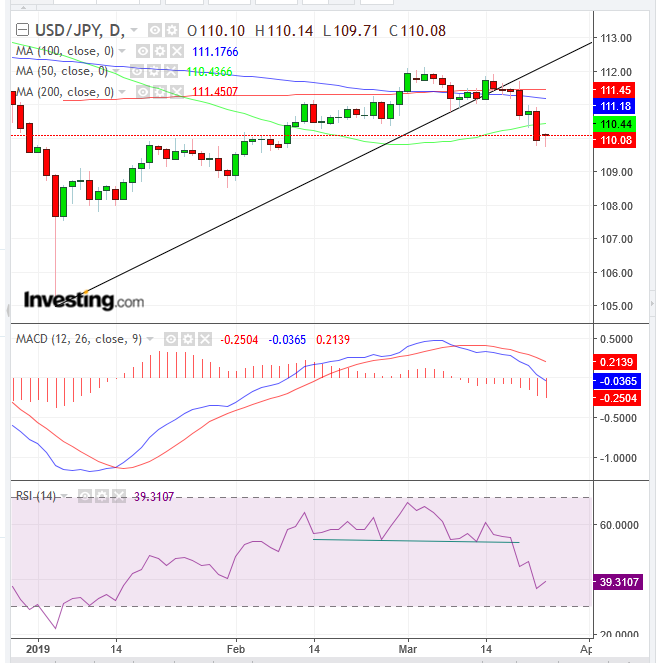 While the yen rebounded from an earlier low, it remained weaker overall, exacerbating market conditions for Japanese investors. Technically, the USD/JPY pair deepened a fall from an uptrend line since the December rout. The major MAs demonstrate the importance of that trend line by aligning with it. The RSI topped out in the same pattern as that of the stock index and the MACD joined it with its own sell signal. 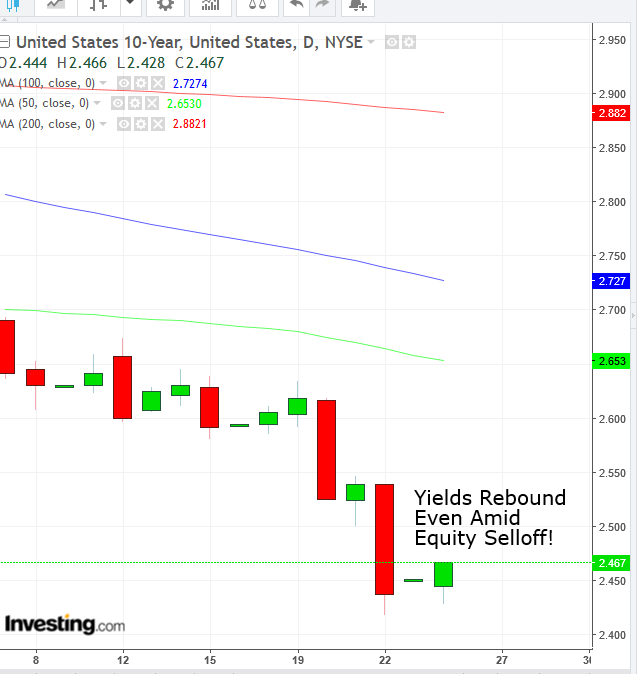 The yield on Treasurys rebounded after plunging below the rate, prompting a curve inversion for the first time since 2007. This closely-watched event is considered the most reliable indicator of an upcoming recession, if it persists over time.

However, headline yields rebounded this morning, suggesting that investors are dumping both Treasurys and equities—a very worrisome sign that market structure is breaking down as perhaps investors are losing faith in financial assets altogether.

Moreover, as mentioned earlier, the yen is weakening relative to dollar, which tends to become favorite safe-haven currency when investors fear a market crash, as in 2008. It’s interesting that the USD is strengthening while Treasurys are being sold off, suggesting perhaps that foreign demand for Treasurys may have increased, while domestic investors are selling.

While we have been bearish in the medium-term—and bullish in the short-term—since early December, we are not convinced of a recession just yet. Besides economic data that warranted caution, there is another catalyst for a selloff: complacency. 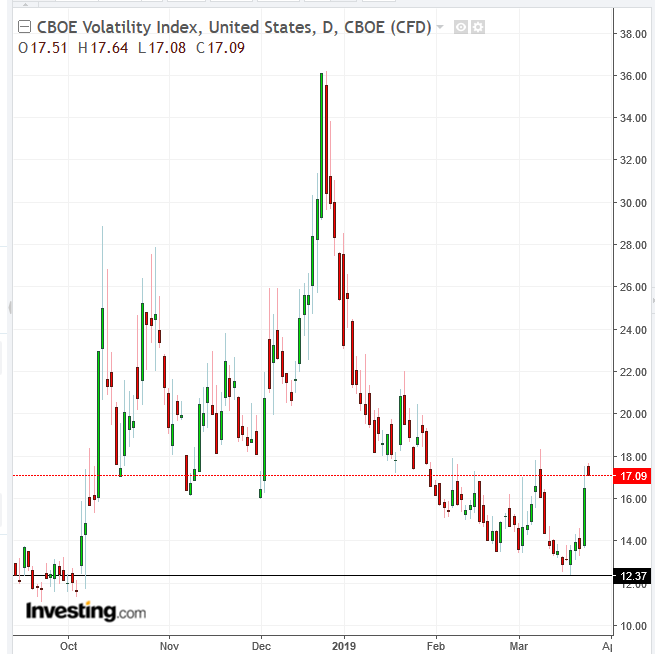 The reached the lowest levels since October after the exuberant post-Christmas rally. Friday’s selloff may have just been a reminder that markets are not mono-directional.

The yield inversion may reflect that while may point to a slowdown, low inflation allows the Fed to go back to a more accommodative stance.

Arguably, the U.S. data that caused the selloff doesn’t come in a vacuum: investors tied it up with European headwinds and with warnings from Fed Chair Jerome Powell about a global slowdown.

Taken alone, a yield inversion is not the best prognosticator for broader market moves. It predicted roughly half of the recessions on records. However, should the inversion deepen, we could see the pattern we saw in 2008, when banks’ fear of a bank run lead to a credit crunch, which in turn pushed former Fed chief Ben Bernanke to start robust quantitative easing.

While we are bearish, we have no way of knowing when the market will enter a bear market—though a yield curve inversion can predict a recession one or two years ahead.

Are the current selloffs indicative of a higher outlook for recession or simply a post-Christmas rally correction within an ongoing bull market? Watch the dollar: it’s embedded tightening, and if it continues to climb as we have forecast, it will add pressure on the U.S. economy.

This explains why we have been bearish in the medium-term, and, given the maturity of the cycle, biased towards a bearish stance in the long-term as well, but it doesn’t necessarily mean we are bracing for a crash.

Overall, the one safe-haven asset that is unmistakably rising is .

In FX news, the slipped lower ahead of yet another attempt by British Prime Minister Theresa May to garner support for her Brexit proposal, as the plot thickens over a delayed deadline.

The pared some of its Friday selloff, which followed the start of two separate investigations by Turkey’s banking regulator into JPMorgan Chase (NYSE:) and other unspecified banks for stoking the currency’s plunge.

Meanwhile, lingered in negative territory for a third day, in line with the outlook for lower demand amid an economic slowdown.