Futures on the , and mirrored global stocks extending a selloff this morning, with several indices completing or developing bearish patterns after underwhelming earnings reports heightened fears that worsening U.S.-China trade relations will continue to take a toll on global growth.

SPX contracts deepened the underlying index’s slide below the key 3,000 number, while NASDAQ futures took a beating from Netflix (NASDAQ:) missing expectations on both subscriber growth and , as the U.S. internet giant posted a significant loss of U.S. customers.

Europe’s was also hit by some relevant earnings misses—most notably by trade-dependent companies such as (DE:), the region’s most valuable tech company, which warned shareholders will have to wait until 2020 for any significant margin improvement, citing the downward effect of ongoing trade jitters. The stock lost 7% on the news, dragging Germany’s lower.

Shares of Swedish engineering services firm Indutrade (ST:) and British online retailer ASOS (LON:) also plunged on some weak metrics, by 12% and 13.5% respectively in early trading—with the latter wiping out this year’s profits. 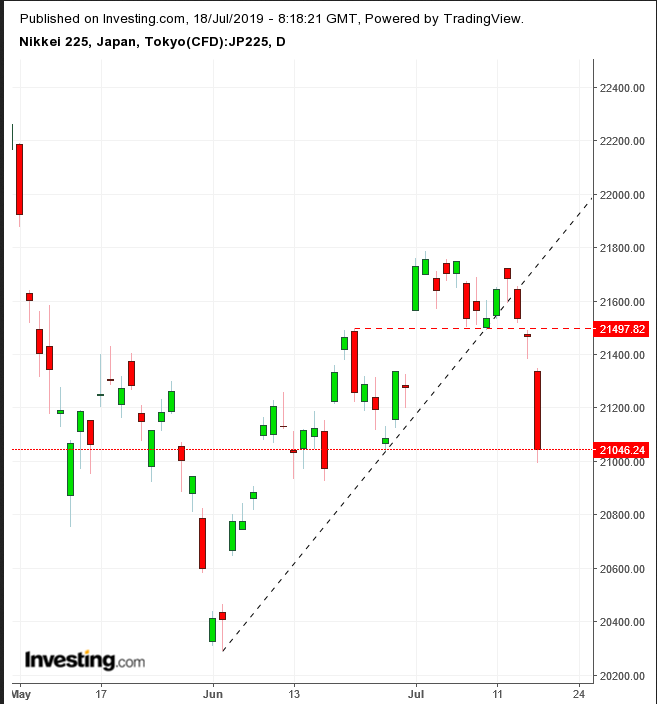 In the earlier Asian session, regional equities drowned in a sea of red. Japan’s underperformed, tumbling 1.97% on reports that Canon (T:) operating profit could plunge as much as 40%. Technically, the index may have completed an island reversal. 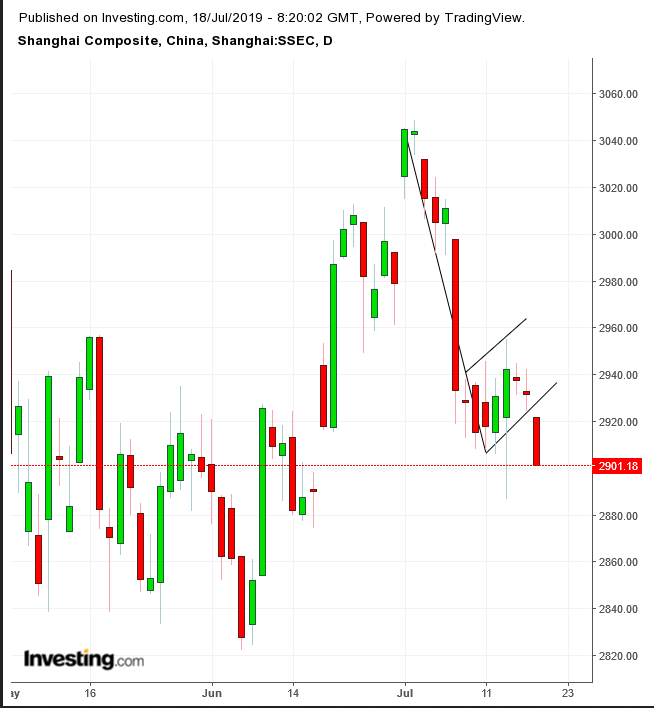 China’s retreated 1.04%. Technically, the gauge may have completed a bearish rising flag.

On Wednesday, U.S. stocks stretched a selloff amid mixed earnings and fears of stalling U.S.-China negotiations over, among others, recent U.S. restrictions on Chinese telecom giant Huawei. 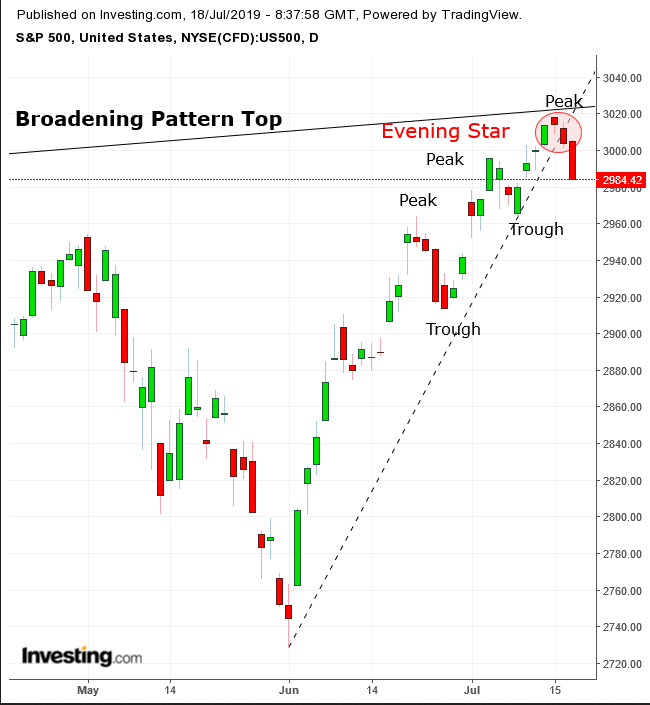 The fell 0.65%, pressured lower by (-2.18%). The index slipped back below the psychological 3,000 milestone, while extending the penetration of an evening star, as the price fell below its uptrend line. The timing of this selloff is crucial, as it happened right at the top of a massive broadening pattern—which tends to form at market tops—ranging since January 2018. 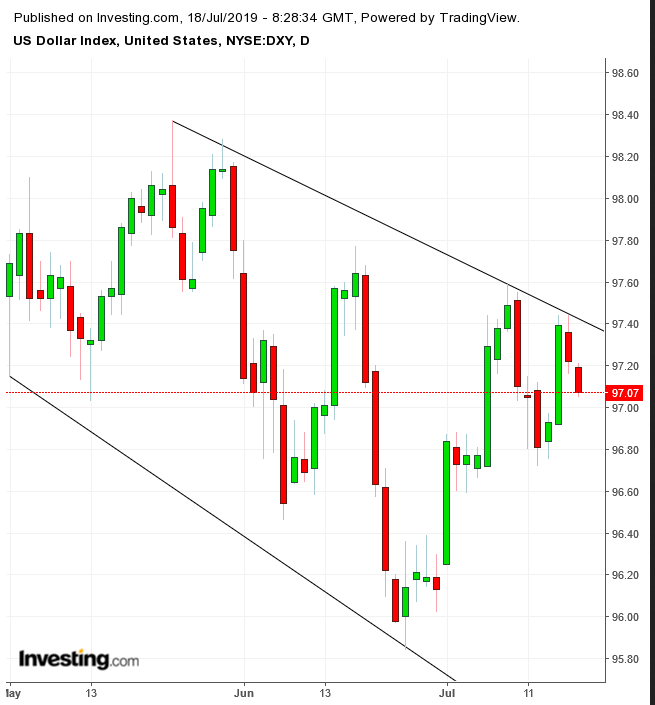 The dropped for a second day within its falling channel, though it managed to crawl above neutral levels by late European morning. The strengthened on risk off and even the , which remains consistently under pressure from Brexit headwinds, gained against the greenback.

strengthened even after the country’s central bank , while held earlier gains after policy makers . 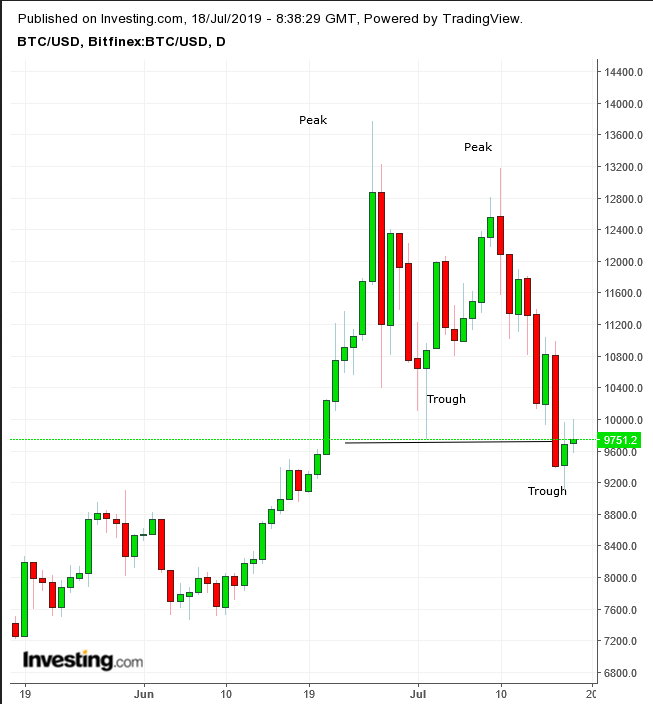 pared much of a second day’s advance, after today’s intraday high found resistance precisely on the $10,000 mark.

Overall, with less than two weeks before the Federal Reserve meets to decide on its next interest rate move, the central bank’s report suggested a generally positive outlook, with the labor market seen as tight. Yet companies are still struggling to pass on higher wages on one side and tariff-related costs on the other—and the start of earnings season, with several companies warning against the impact of the prolonged U.S.-China trade spat, surely hasn’t improved sentiment.