U.S. Treasurys returned to the spotlight this morning, climbing again after U.S. President Donald Trump lamented lack of progress with Mexico, thereby increasing the odds he’ll press ahead with tariffs on the Latin American country. entered a bear market, further darkening the horizon and prompting gains in as well. However, European stocks gained ground for the fourth straight day and U.S. futures edged higher, in rare formation as both risk and safe-haven assets edged higher.

Futures on the , and suggested the sharpest two-day rally since the beginning of the year may resume. Meanwhile, the advanced with utilities and healthcare, which offset losses in carmakers triggered by a failed merger attempt between Fiat Chrysler (NYSE:) and Renault (PA:). Renault’s shares plunged as much as 8% in Paris and Fiat was traded 3.8% lower in Milan—though both recouped some losses in the later European morning— after investors saw prospects of what could have been a group worth $39 billion of combined market value and the world’s third-largest carmaker evaporate.

In the earlier Asian session, regional stocks slid lower as trade negotiations on both the Chinese and the Mexican front were derailed, with the latter pressuring the lower. Data from the U.S. showing in almost a decade worsened sentiment. 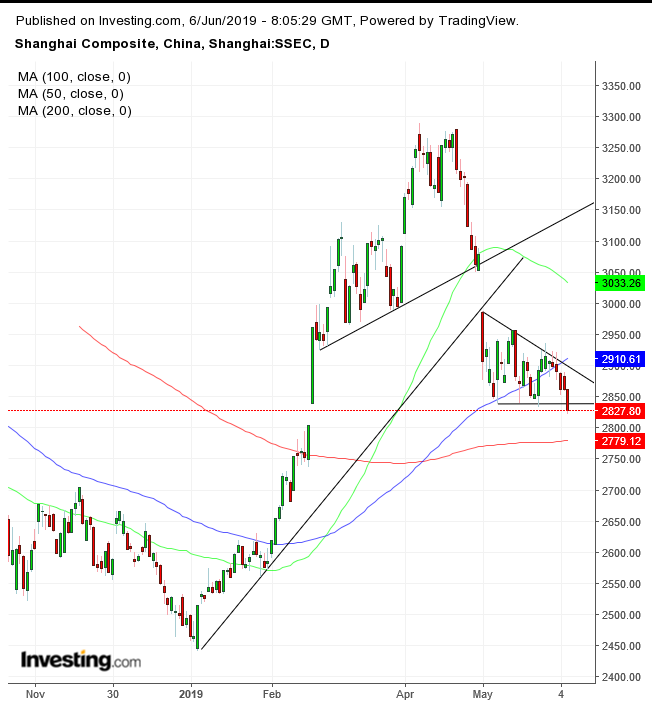 China’s (-1.17%) fell for the fifth day in a row—even after a $72 billion injection from policymakers, the second largest on record—closing slightly below a bearish descending triangle, exactly one-month in the making. The 200 DMA, 1.65% lower, may be the last support before a continued decline. Could global stocks, including U.S. equities, continue trading in a bull market if Chinese stocks crash? Probably not. The chart of the Chinese benchmark may in that sense provide a leading indicator of the end of the bull market.

The SPX was helped higher first and foremost by (+2.28%), which roared back after uncharacteristically falling amid the rate cut outlook. The second-best performer was (+2.14%)—something that should keep investors on their toes: when defensive stocks rise, it suggests traders are not fully confident. (-1.11%) tracked oil prices plunging into a bear market on a hefty build up in —even as some expect crude could surge to $100 amid a growing U.S.-Iran conflict. The current lows in fact highlight a mismatch between fundamental headwinds and trader perception, according to some analysts. 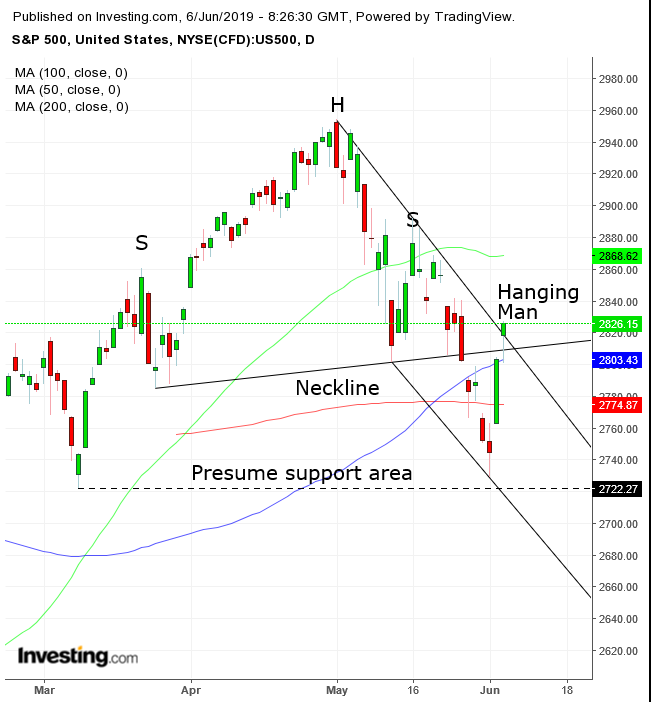 Technically, the SPX climbed above the neckline of a H&S top, putting into question the medium-term reversal it purported. However, it was stopped by the downtrend line since May 1, the head of the pattern. It also formed a hanging man, the first of a two-day pattern. If today’s prices close below the hanging man’s real body, it would suggest a short-squeeze in the making, pushing prices back down and confirming the resistance of the H&S neckline. 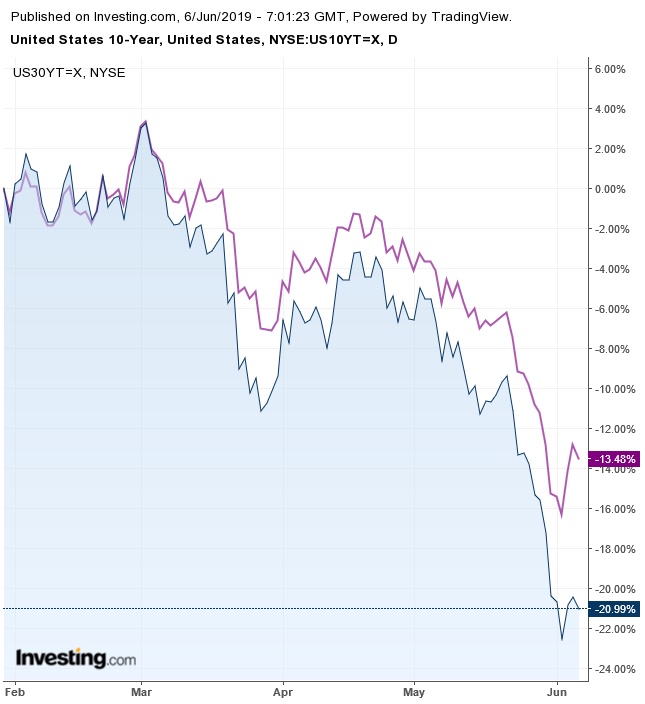 However, at the same time yields resumed their tumble, deepening the curve with longer-dated bonds, after the new jobs reading for April revealed U.S. companies added the fewest hirings in nine years. The standstill in jobs amid heightening trade tensions with Mexico is especially poignant, as tariffs on the southern neighbor could reportedly cost the U.S. 400,000 jobs.

Traders priced in rate cuts, creating a market paradox. On the one hand, the outlook of easing monetary policy boosted equities to their best performance since January on Tuesday, but on the other hand, the steepening yield curve increases the odds of a recession. Analysts from some global investment banks think the market priced in rate cuts prematurely. Either way, Tuesday’s exuberant rally on the interpretation of an accommodative contradicts Friday’s selloff on expectations that the Fed will be forced to cut rates to support a contracting economy. These are vivid examples of colliding market narratives we forewarned on Monday.

In the FX market, the steadied against the greenback ahead of the European Central Bank’s , with President Mario Draghi under pressure from markets to provide more stimulus, in line with a loosening shift among global central banks.