Futures on the , and continued to drop with global stocks while yields on Treasurys headed to the highest level in a month this morning, as investors steered clear of shares and bonds alike ahead of a by Fed Chairman Jerome Powell later on Wednesday.

The dropped for a fourth consecutive day, with Spanish shares exposed to Mexico taking a hit from the unexpected resignation of Mexican Finance Minister Carlos Urzua, which sparked concerns around President Andrés Manuel López Obrador’s ability to safeguard the country’s financial stability.

In the earlier Asian session, regional stocks ended mixed as traders shied away from making a bold guess on the Fed’s monetary policy easing, after Friday’s upbeat U.S. prompted fears the central bank may backtrack on its dovish tilt.

Australia’s outperformed, notching 0.36% higher. South Korea’s followed with a 0.33% climb, helped by gains in Samsung Electronics (KS:) and SK Hynix (KS:) on news the two companies intend to reduce NAND chips production due to an oversupply as well as to new exports curbs from Japan. The South Korean benchmark took a beating after Japan announced restrictions last week on exports of semiconductors materials, vital to the neighboring country’s tech industry.

However, in yet another example of market anomalies, yields climbed on Tuesday even as U.S. stocks made a surprise comeback in the final hour of trading, to close in the green. Sudden demand for technology stocks, pulled up by FAANG shares including Amazon (NASDAQ:) and Facebook (NASDAQ:), offset a selloff in materials and consumer staples. 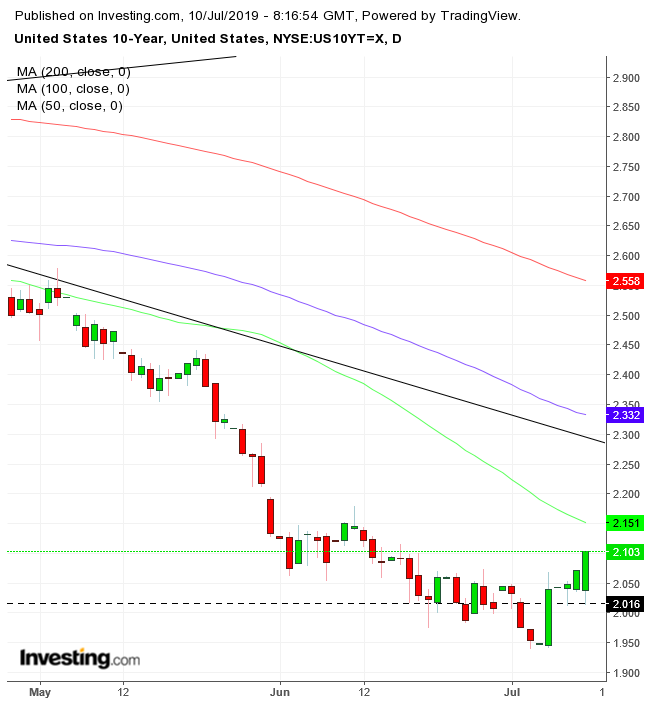 Technically, 10-year yields are rising on a correction within a downtrend.

Fundamentally, they keep climbing after they sealed their biggest jump since Jan. 3 on Friday, when strong labor data flipped the outlook on interest rates upside down. The new potential for a slower path to lower rates than anticipated, or—in a more extreme scenario—a return to Powell’s original tilt towards higher rates, would be bearish for equities.

As to bonds, it is important to bear in mind that, at present, investors are not necessarily moving overweight on Treasurys as a risk-off defensive move, but are rather trying to position themselves based on a forward-looking rate outlook.

They might be trying to figure out right now whether there is any upside for both bonds and equities if Powell reiterates the central bank’s pre-NFP dovishness, given that the market may have already discounted an interest rate cycle. Also, they may monitor from the June monetary policy meeting as a more reliable source to gauge the Fed’s future rates moves.

We expect both Powell’s Congress testimony and FOMC minutes to strike a neutral tone that would avert prompting a market meltdown but also avoid reinforcing the forgone conclusion of policy easing. 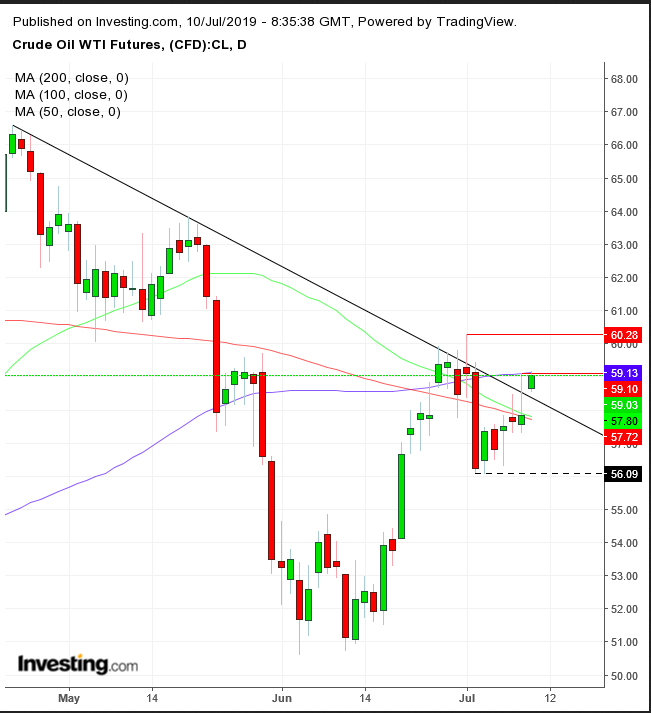 In commodities markets, jumped after the American Petroleum Institute reported a large inventory draw, reigniting worries of a supply glut due to the downward effects of a global trade war. Technically, the price is retesting yesterday’s bearish shooting star, which found resistance by the 100 DMA—though it did so after an open that cleared the downtrend line since April 23. However, the real test for an upside reversal is a consolidation above the July 1 high of $60.28.

TLRY Stock: Tilray Stock Keeps Its Eyes on the Future