A few days ago, an email circulated amongst a handful of us here at InvestorPlace. It was one of those emails that immediately interrupts your day, stealing away your attention, leaving you unable to focus on much else.

Matt McCall immediately wrote an update to his subscribers, revealing the email’s takeaway.

John Jagerson, always the quant, dug into the email’s data, analyzing and dissecting it for additional insights.

And our own CEO, Brian Hunt, immediately moved $350K of his personal money back into the stock market based upon the email’s conclusion.

So, what was in this email that caused such a reaction?

It was a study from LPL Financial that analyzed what’s happened in the market when the Fed has cut rates at a time when the S&P 500 has been within 2% of an all-time high … which is the exact market condition it appears we’ll have 12 days from now when the Fed reveals its rate-decision.

In short, the study provides a very clear bullish takeaway. And we could stop there — but our resident quant, John Jagerson, did an even deeper dive into the study in order to give us additional historical context.

Today, let’s get into all the exciting details.

***Before we tackle this new market study, let’s revisit a separate, recent one

In Monday’s Digest, we featured a different market study from John Jagerson. It analyzed the relationship between big bank earnings and the subsequent performance of the broader stock market.

In short, there was one key issue — we needed to avoid a situation in which 30% or more of the big banks posted disappointing earnings. If we failed, historical market data suggested we’d see a 7% drop in the broad market over the next 60 days.

At this point, enough of the big banks have reported that we can draw a general conclusion — we’ve passed … though it was a bit close for comfort.

I reached out to John for his summarizing thoughts:

A theme is beginning to emerge from the bank reports so far. Trading revenue is down and net interest margin has been weak as long-term rates drop, but consumer banking is still very good. Among those banks that have surprised expectations, Citigroup (C) is a good example of these trends. The bank beat revenue and profit expectations mostly through a 4% increase in consumer banking revenue, including a 7% increase in branded credit cards …

Overall, earnings for the banks are up compared to last year, and 80% of the stocks in the finance sector have beaten profit expectations. I think this qualifies as a successful start to earnings and should mean that we have dodged a bear market for a little longer.

We needed a 70% pass rate, and we got 80%. Close, but good enough for us to check the box on this hurdle and move our attention to the next market challenge.

While the results don’t point toward any specific market-gains we can bank on, they do suggest we’ve avoided a substantial market loss.

As mentioned earlier, the email in question highlighted a study of what’s happened in the market when the Fed has cut rates at a time when the S&P 500 has been within 2% of an all-time high.

As I write, the S&P is about 1% below its recent all-time high. Meanwhile, CME’s FedWatch Tool reports there’s a 100% expectation of a rate cut on July 31 (62% believe it will be a quarter-point cut, with the remaining 38% anticipating a half-point cut).

So, if we remain on this trajectory, we’ll find ourselves in the same conditions highlighted by the study in the email. What would that mean for the market?

For that answer, I’m going to turn to Matt McCall, editor of Investment Opportunities, and the update he just sent to subscribers. 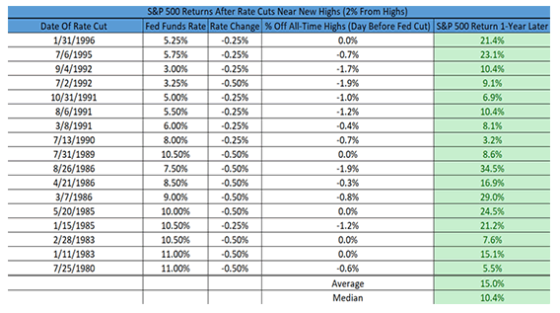 (The chart above) shows every time since 1980 that the Federal Reserve (Fed) cut interest rates when the S&P 500 was within 2% of an all-time high.

That’s the situation we’re likely to be in soon. And historically, this has occurred 17 times in 39 years. In all 17 instances, the S&P 500 was higher one year later. Even more impressive was the average gain of 15% in the year after the Fed cut rates …

For context, the average 12-month return for the S&P over the last 50 years is about 8%. So, in this particular situation of a rate cut near market highs, we see nearly twice the average returns.

***John Jagerson provides us more historical context for the study

As mentioned earlier, John looked at this market study and, as a quant, immediately dug into the numbers for himself, and shared his conclusions with his Strategic Trader subscribers.

After corroborating the conclusion of the original study, John asks an interesting question:

… why was the Fed cutting rates during those periods? Was it to boost the economy, or was it a reaction to falling inflation or external crises?

John then reminds us that the Fed’s mandate is to produce economic conditions that are favorable for full employment and stable prices. So, in these 15 prior cases, the Fed cut rates as a reaction to either a short-term financial crisis, unemployment, or inflation.

For example, in the early 1980s cuts, inflation was declining, and the Fed was trying to bring the target rate back down from the low-20% range. The 1989 cut was a reaction to the savings and loan crisis. The early 1990s cuts were based on stubborn high unemployment. And the 1995-96 cuts were a response to the Mexican Debt Crisis.

So, what issue is the Fed trying to address now with a rate-cut?

Right now, inflation is low, but not alarming, and unemployment remains stable. This means that the Fed is trying to prevent a recession before there is a crisis, and it is willing to do so before we have evidence that would have been used to justify a cut in the past. This puts the market in uncharted territory.

So, the Fed is likely to cut rates at a time when it won’t be doing so as an effort to address inflation, employment, or reverse an existing recession. That makes this potential cut unique.

What that means for the market study’s “15% average gain” isn’t clear. While it could result in gains that are lower, you could easily make the case that 15% isn’t high enough.

Is there anything we can say with certainty? Here’s John’s objective take:

Although we can’t say that rate cuts at market highs predict positive returns, we can say that there is no evidence of a negative correlation either.

At this point, we believe this quarter’s earnings reports will set the tone for the market. If reports are within average expectations, we may be able to avoid the third-quarter volatility that has been so common over the last 11 years.

In that respect, this quarter has a good shot of beating its low expectations. Even though growth rates are down and average earnings will be lower than they were last year, the big bank reports so far have indicated that consumers are still very strong, which justifies a cautiously optimistic outlook.

***So, at a minimum, the data doesn’t suggest 1-year declines if the Fed cuts rates

Factoring everything in, for now, we’re expecting more gains with all eyes on the Fed come July 31st. If they cut rates as everyone is anticipating, the case for a melt-up appears intact.

We’ll continue to keep you updated.

Monday Apple Rumors: What Can We Expect From the 2020 iPhone