Paychex earnings for the company’s fiscal fourth quarter of 2019 have PAYX stock down on Wednesday. 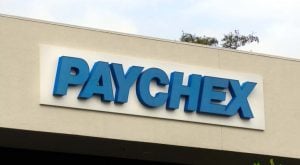 The most recent Paychex earnings report has the company bringing in revenue of $980.40 million. That’s an improvement over the company’s revenue of $845.70 million reported in its fiscal fourth quarter of the previous year. It also has the company beating out analysts’ revenue estimate of $979.51 million for the period, but that couldn’t keep PAYX stock from falling.

Paychex also includes its outlook for its fiscal full year of 2020 in its most recent earnings report. It is expecting earnings per share for the year to increase by 8% to 9% from fiscal 2019. Wall Street is looking for earnings per share of $3.10 for the period.

PAYX stock was down 3% as of Wednesday morning.