Powell nods toward interest rate cuts … Meanwhile, our politicians have Big Tech in the crosshairs

Referring to trade negotiations “and other matters” Powell said:

We are closely monitoring the implications of these developments for the U.S. economic outlook and, as always, we will act as appropriate to sustain the expansion, with a strong labor market and inflation near our symmetric 2% objective.

Even with May’s volatility, yesterday’s gains put the S&P just 4.8% below its April 30 record high. As I write Wednesday morning, the Dow is up again, currently over 100 points.

***Now, while we’re obviously fans of a surging stock market, we’d be remiss not to point out a potential challenge here

To make sure we’re on the same page, some quick context.

On the flip side, higher rates from the Fed tend to stifle investments and slow growth. In 1997, MIT economist Rudi Dornbusch wrote, “None of the U.S. expansions of the past 40 years died in bed of old age; every one was murdered by the Federal Reserve.”

Now, I’m going to go out on a limb and suggest that Powell doesn’t want to go down in history as “Jerome Powell, the Bull Market Killer” — which is likely a major reason why he’s now signaling an openness to a rate cut.

Well, there’s an annoying little detail we have to factor in …

For rates to be cut, they have to be elevated. And that’s where things get a bit dicey today. In short, the Fed doesn’t have a lot of room to cut rates anymore.

First, here’s a chart of the Fed Funds Rate since 1980. Notice the series of lower highs and lower lows. In other words, each time the Fed lowered rates, they haven’t risen to prior levels and remained there on a sustained basis. It’s been a slow, downward slope …

This means if we’re starting a new round of easing here in 2019, we’re beginning at the lowest levels in the last 40 years … and that could be dangerous.

To drive this home, below is another chart. Here’s the quick takeaway: In the last three downturns, the Fed cut rates more than twice the amount that the Fed has room to cut today before hitting zero. 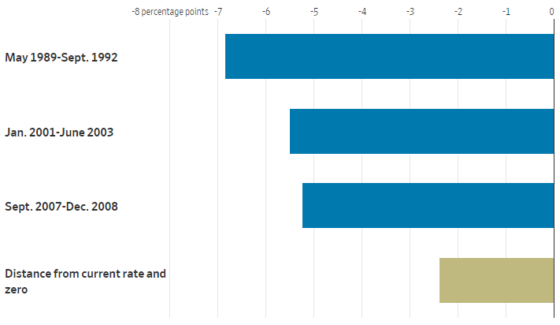 Futures traders have almost fully priced in not one but two cuts before 2019 wraps up. Specifically, Fed-funds futures show markets pricing in about a 98% chance of one rate cut this year, and roughly an 83% chance of two rate cuts.

But with rates already so low, the Fed has little room to continue cutting them in case we go through a real downturn or recession.

***As to the source of that downturn or recession, the most likely guilty party will be tariffs and a trade war

We talked about the trade war and dangers from tariffs in yesterday’s Digest. But let’s add some more color to that.

Mark Zandi is the chief economist at Moody’s Analytics. He recently ran several scenarios through his computer models to assess the risk of a U.S. recession. Chief among them is a trade war.

If Mr. Trump follows through on all of his threatened tariff increases, including 25% tariffs on all Chinese goods, 25% tariffs on imports from Mexico and tariffs on U.S. car imports, it would act like a massive tax increase on U.S. households and businesses, straining confidence and markets and knocking the U.S. into recession in 2020, he said.

Mr. Zandi said his model showed full scale trade war would lead U.S. employment to drop by 3.1 million between the third quarter of this year and mid-2021, while the jobless rate would rise from less than 4% to 6.6% by mid-2021. Stock values, he added, would drop 37%.

Mr. Zandi assumes China would retaliate, in part by allowing its currency, the yuan, to depreciate in value, hurting U.S. manufacturing, and curtailing purchases of U.S. Treasury bonds, pushing up interest rates and hurting homeowners and stocks.

Coming full circle, if this were to happen, how would the Fed help our economy if it no longer has any room to lower rates?

Let’s hope the situation doesn’t develop in which we have to find out.

***Meanwhile, our politicians have Big Tech in their crosshairs

“Unwarranted, concentrated economic power in the hands of a few is dangerous to democracy … the era of self-regulation is over” — House Speaker Nancy Pelosi

Our government just took a shot across the bow of Big Tech, and it could have a very real impact on your portfolio.

On Monday, the House Judiciary Committee unveiled a sweeping “top-to-bottom” review of an unnamed group of tech companies.

“A small number of dominant, unregulated platforms have extraordinary power over commerce, communication, and information online,” the Judiciary Committee noted in a bipartisan news release. “Based on investigative reporting and oversight by international policymakers and enforcers, there are concerns that these platforms have the incentive and ability to harm the competitive process.”

Meanwhile, the Department of Justice and the Federal Trade Commission are looking into Facebook, Google, Amazon and Apple — investigating what appears to be anticompetitive dominance and abuses by Big Tech.

These four companies serve as the cornerstones of millions of portfolios around the world. Collectively, they’re worth $3 trillion. For context, that’s more than the entire GDP of the UK ($2.6 trillion).

***After years of a laissez-faire attitude toward Silicon Valley, the Department of Justice and the Federal Trade Commission are changing their tune

In an arrangement between the two government agencies, the Justice Department now has authority to look into any antitrust issues involving Google and Apple. Meanwhile, the FTC has oversight over Amazon and Facebook.

Separately, the House Judiciary Committee launched its own investigation into competition in digital markets. It will include a series of hearings along with an information probe into select tech companies. Beyond a review of the digital market landscape, regulators will evaluate whether current antitrust law and enforcement efforts have kept up with the fast-changing tech market.

Committee Chairman Jerrold Nadler, D-N.Y., said “Given the growing tide of concentration and consolidation across our economy, it is vital that we investigate the current state of competition in digital markets and the health of the antitrust laws.”

There’s an evolving narrative of Big Tech abuse. These massive companies, whose services reach billions of people around the globe, are largely unregulated. Yet they’re collecting huge quantities of data on users. Lawmakers are worried about the lack of oversight on the collection and use of this information.

Of course, perceived violations by Big Tech is hardly new.

You likely recall the Cambridge Analytica debacle, in which Facebook enabled third parties to use Facebook users’ data to develop sophisticated psychological profiling and personalization algorithms, all intended to influence their beliefs and votes.

Facebook took a $3 billion charge in the first quarter, as it “reasonably estimated” that it will be on the hook to pay at least that much as the FTC doles out punishment for violating a consent decree on user privacy. The fine could come in as high as $5 billion.

Meanwhile, the Justice Department brought a civil case against Apple for allegedly fixing prices on e-books. Apple lost and had to pay $400 million to consumers.

And back in 2010, the Justice Department also reached a settlement with Apple, Google and select other tech companies, resolving allegations that these companies had agreed not to compete for each other’s workers.

As to the potential fallout of these new probes, some politicians such as Elizabeth Warren are going so far as calling for the breakup of Big Tech companies. How that would affect millions of investor portfolios around the world is unclear.

But as a tiny preview of what could happen, Monday’s selloff from Facebook, Google, Amazon, and Apple wiped out a collective $133 billion of investor wealth. How much is that?

That’s more than the size of cigarette behemoth, Philip Morris. Imagine Philip Morris being obliterated in a single trading session.

We’ll continue to monitor the investigations and keep you up to speed.

A strong economy and Fed rate cuts: the market gets to “have its cake and eat it too”