In this odd sports season, I saw one of my favorite headlines last week.

It’s not a particularly odd headline. In fact, it’s one you see all the time.

The only thing is, the concept behind the headline is dead wrong.

Statistically speaking, there is no such thing as “a hot hand.” It’s a bias people bring with them as they watch games.

But this isn’t just a sports story. It can give you an edge in your investing, too.

Louis Navellier, editor of Accelerated Profits, has written several essays on biases that hurt investing returns, and the NBA playoffs reminded me of one of my favorites – recency bias.

Here is what Louis wrote to explain the concept.

Imagine watching an NBA basketball game, and Lebron James is having a terrific game. He has just made six shots in a row. The game is close, and Lebron is clearly lining up to take another jump shot.

What are the odds that he is going to make that shot?

In basketball, players and coaches will often talk about the “hot hand.” This refers to the phenomenon that someone who has made several baskets in a row has a greater chance of making the next one.

But that’s a fallacy. The odds that Lebron James or any other player will make his next shot remains the same, regardless of how many baskets they have made previously.

The belief in the “hot hand” is a well-studied example of Recency Bias.

Louis explained that in investing, folks are more likely to invest in stocks with momentum. If a stock has been going up for months, folks naturally believe it will continue in that direction.

The same goes for stocks going down. Folks are reluctant to put money in stocks that have experienced recent downturns because they believe the downward trend will continue.

September is historically the worst month for stock performance. And so far, September is living up to its reputation in 2020. Below is a chart of the S&P in the month as of Friday morning. 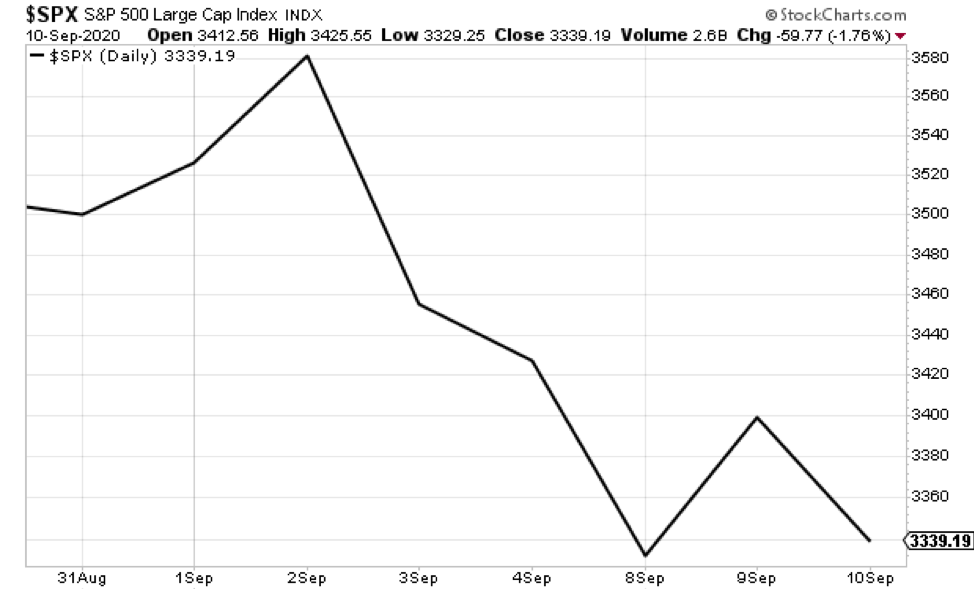 As I write, the market is showing signs of a slight rebound.

A moment like this is when recency bias can hurt investors.

***After the run up we’ve had since the market lows, a dip like this looks like a top

I can understand why folks might feel nervous about this market. There are still a lot of unknowns out there.

We could see another COVID spike in the fall.

The election could be chaotic.

Protests continue around the country.

The entire west coast is practically on fire.

That’s just what we have to look forward to in the next two months!

But making stock decisions based on what’s happened recently is not productive. It’s not a numbers-based approach.

Louis is a numbers guy … he always has been. He has a proprietary stock grading system that takes all the human biases out of investing. Here is how he explains how it helps him avoid so many of the common mistake investors make.

Instead of eyeballing a stock chart and seeing how it has performed lately, my system runs the numbers using thousands and thousands of points of data (fundamental as well as momentum indicators). It finds the very best names and sends me an alert that a stock is about to skyrocket. Because the alert is developed using only data, I don’t have to worry about falling victim to Recency Bias.

Louis recommended buying Atlassian Corporation plc (TEAM) in August 2018. A look at that chart shows how his subscribers profited in the two years he held the stock. 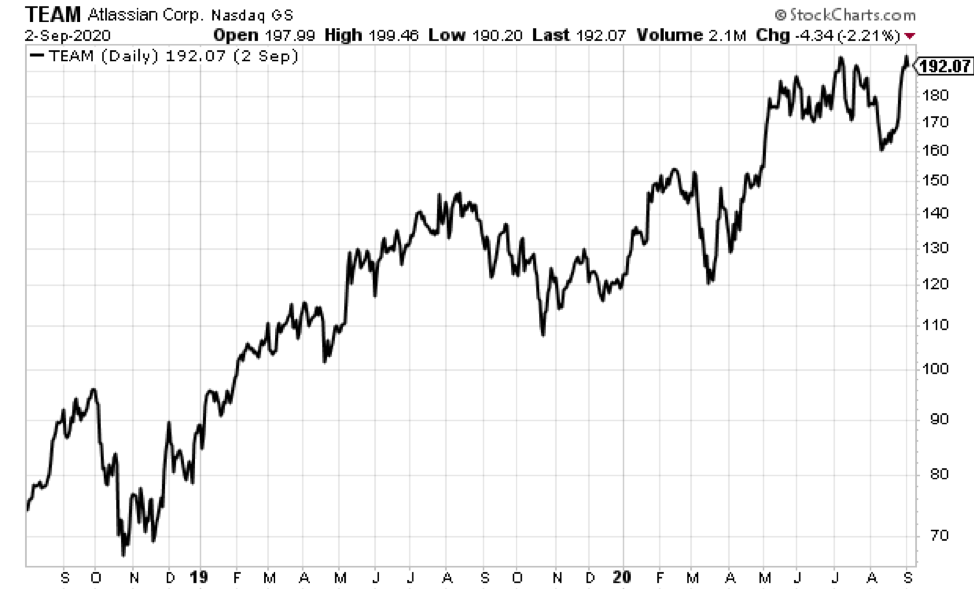 If you were just a momentum investor, you’d be hard pressed to justify selling that stock. But Louis’ number-based approach told him it was time to sell.

Here is what he wrote to his subscribers.

As a global software company, Atlassian Corporation Plc (TEAM) focuses on providing tools and resources that promote teamwork and collaboration. So, during the global pandemic, TEAM’s products were in strong demand. During the most recent quarter, the company added 3,046 new customers, bringing its total customer base to 174,097.

For the company’s fourth quarter in fiscal year 2020, TEAM achieved earnings of $63 million, or $0.25 per share, and revenue of $430.5 million. That represented 29% annual revenue growth and 23% annual earnings growth. The consensus estimate called for earnings of $0.21 per share and revenue of $410.7 million, so TEAM posted a 19% earnings surprise and a 4.8% revenue surprise.

However, for the company’s first quarter in fiscal year 2021, analysts are forecasting an earnings decline and have lowered earnings forecasts over the past month. As a result, buying pressure is also starting to dry up. Let’s take this as our cue to exit.

TEAM has rallied about 18% in the past two weeks, which is giving us a nice window to sell our shares into strength. If you bought TEAM when we added it to the Ultimate Growth Trades Buy List in early August 2018, you’ll sell the stock for about a 161% gain. Sell TEAM.

No emotion in that analysis. No worries about missing out on additional gains for a stock that has produced 161% gains in Accelerated Profits.

The market’s volatility will most likely continue through the end of the month, and September will keep its reputation for being a lousy month for stocks.

But to make money in the markets in the long run, you need to keep your biases in check. If you find yourself wanting to buy or sell based solely on market news, you need to check your recency bias.

Regardless of market trends, Louis’ numbers-based approach will continue to identify the fundamentally superior stocks that will thrive in any market conditions.