At her peak, Molly Bloom earned over $4 million a year from running an underground poker game for celebrities.

The details of her story are so remarkable that Bloom was the subject of the 2017 film, “Molly’s Game.”

In short, after an injury ended her Olympic skiing aspirations, Bloom found herself in Los Angeles, where she stumbled into the role of running a high-stakes poker game for celebrities and high-profile figures.

It’s a fun film if you’re looking to fill a slow afternoon. But what’s more interesting to us is Bloom’s business model — what’s called the “croupier” model — which resulted in that $4 million one-year haul.

You see, the croupier business model doesn’t get much mainstream press, but it’s one of the best on the planet. And it has a way of making its shareholders very rich.

Matt McCall’s Investment Opportunities subscribers are aware of this. That’s because it was nearly a year ago that Matt described the wealth-generating power of the croupier model to his readers.

Croupier is a French word — pronounced like “croo-pee-ay.” A croupier is someone at a gambling table that runs the game and helps gamblers place their bets. He also takes a small cut of the total bets placed.

A good croupier business is a wonderful, wonderful thing. The croupier is not one of the gamblers taking huge risks. He doesn’t bet at all, but makes a little bit of money from each and every bet. He is the guy skimming small amounts from huge volumes. Eventually, all the small amounts add up to a big pile of money.

Croupier businesses can include stock exchanges, commodity exchanges, brokerages, and of course, casinos. They are toll roads on the world’s financial highways. Trillions of dollars travel around the world every day. That travel is not free. The croupiers always get their cut.

You’re likely used to trading stocks on the Nasdaq, but did you know you can also invest in Nasdaq?

Approximately 10% of the world’s security transactions occur on Nasdaq systems. And the company makes its money from fees related to all these transactions.

Companies pay a listing fee for a home on the Nasdaq stock exchange, investors pay transaction fees to place trades on the exchange, and users pay service fees to access market data, products, and corporate services of various kinds.

All that money adds up … which is great for investors. Nasdaq just hit a new 52-week high. 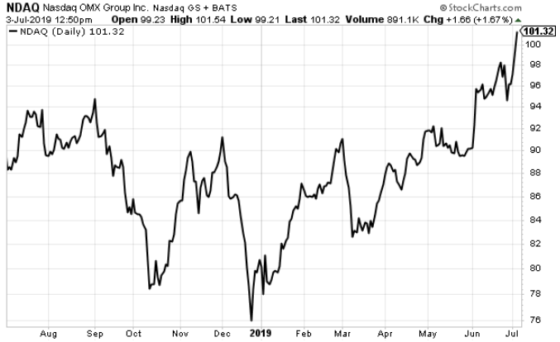 The stock is up over 43% since the original recommendation. A big congrats to Matt and his Investment Opportunities subscribers for their gains.

In a moment, we’re going to discuss the evolution of the croupier model as it relates to the internet. But first, let’s make sure we’re all on the same page as to why this model is so effective.

To begin, croupiers don’t have to spend massive amounts on factories, equipment, or raw materials. Because of this, they typically generate high profit margins. That’s a great thing for investors.

Even better, croupiers are often insulated from competitive threats due to regulatory barriers to entry, or because they moved into their market first and became established and trusted. This “first mover advantage” often makes threats from new competition limited. Another name for this is a “wide moat” — in essence, a defense against competition. Warren Buffett fans will recognize “moat” as a characteristic he looks for in his investments.

For an example of how all this looks in practice, I’m going to turn back Matt:

… the Chicago Mercantile Exchange (CME) is one of the world’s largest and most important financial exchanges. It’s where investors, speculators, and businesses go to transact in financial instruments like currencies and commodities. Businesses use CME’s exchanges to hedge currency exposure. Large commodity producers use them to lock in the prices at which they will sell their future production. Speculators use the CME’s exchanges to bet on stocks, bonds, and commodities.

The CME doesn’t risk money on the direction of any of these things. It doesn’t care if the price of oil goes up or down. It’s just the middle man, taking a small cut from each transaction. CME’s dominant position in the marketplace makes it very difficult to compete with it. 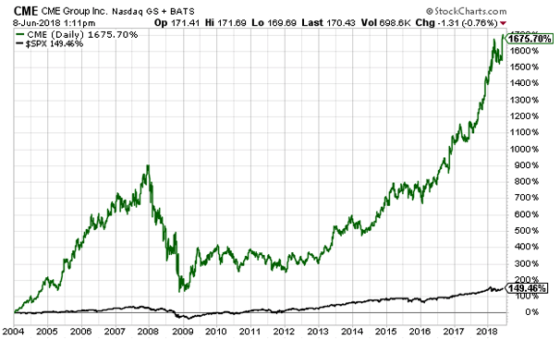 That’s the wealth-generating power of the croupier model — whether a trade goes up, down, or sideways, it’s doesn’t matter to the croupier … it gets its cut every time, as long as there’s a transaction.

While the internet has made our lives vastly more convenient, it’s also become a cybersecurity nightmare.

Last year, there were a billion breaches of private data.

That’s because the internet’s original infrastructure was designed to share information — not protect sensitive data for transacting purposes.

Given this, when internet transactions began to grow more common, the big banks and credit card companies had to step in to help facilitate safer transactions. They did this by basically walling off their own private ecosystems. Individual logins and passwords resulted in mostly-safe transacting.

Unfortunately, the flip side of this centralization was it made it far easier for hackers to know exactly where the largest quantities of personal data were being stored. In other words, all of our data was housed within the ecosystems of a few massive companies — for instance, Google, Facebook, Amazon — which made them ripe targets.

But the next phase of internet transactions is upon us — and there’s a big difference today: blockchain.

The huge benefit of this is that a hacker would need to hack ever single computer in the blockchain … across the entire internet.

***While this is great for protecting our transactions, it’s also going to mean the developing blockchain universe will have its own croupiers

And that spells huge wealth creation for the select companies that make transacting simple, efficient, and convenient.

Imagine how many transactions occur over the internet …

For some context, consider this: this past May, Google Pay recorded roughly 240 million transactions — in just that month alone.

Now, imagine a croupier skimming a tiny bit of each one of these transactions … and expand that to all transactions on the internet, not just Google Pay. The wealth-creation potential is massive.

Our guess is the best, most popular solutions will come from big tech, Visa, and Mastercard, though there will likely be some smaller upstarts in the picture that capture market share and see exponential growth over a short period.

We’ll keep you up to speed as this develops and the investment options become clearer. In the meantime, congrats again to Matt and his Investment Opportunities subscribers on their Nasdaq gains.