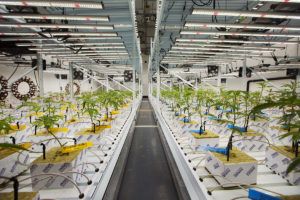 Many California marijuana growers are up in arms over a recent proposal before the state Public Utilities Commission that would require all indoor cultivation operators to use only LED lights by 2023.

If implemented, the proposal could cost cannabis businesses hundreds of millions of dollars, the growers say.

The proposal is part of a lengthy report issued this month by the Codes and Standards Enhancement (CASE) Program. It would force indoor growers to transition away from lower-efficiency grow lights, such as metal halide or high-pressure sodium (HPS), which are favored by some indoor growers over costlier LEDs.

“It’s very important to consider the upfront costs and … how growers will pay for that,” Amber Morris, director of government affairs for NorCal Cannabis, said during a recent webinar organized by the United Cannabis Business Association.

At this point, she said, it’s impossible for NorCal to transition to greenhouses in order to save the money it would cost the company to comply with the proposed requirement.

It would cost NorCal at least $5.6 million to install LED lights for the entire canopy, estimated Bob Gunn, the CEO of Seattle-based energy consulting firm Seinergy.

He also estimated it would cost roughly $255 million for all of California’s indoor growers to change over.

That figure is based on a 2019 statistic in the CASE report that found California has roughly 3.4 million square feet of indoor canopy licensed for cannabis cultivation.

Gunn also warned that the financial cost of the CASE proposal would likely kill a lot of LED incentive programs.

Sacramento-based Nimbus Cannabis used such incentive programs to build out its LED grow operation when it relocated to the state capital from the San Francisco Bay Area.

But Joe Cavallero, Nimbus’ vice president of cultivation, warned that the upfront cost of LED lights is only the beginning of the actual conversion cost. Nimbus initially spent $500,000 on LED lights for a small-scale grow.

“We were covered for about 30% of those costs, but … there are a lot more costs than just the lighting,” Cavallero said.

He warned about a likely increase in costs for other needed infrastructure as well as the time it takes to change growing operations so yields don’t decrease.

“I’d say a cultivator needs at least a year or two to dial in their new process, and not all operators can get a state-of-the art facility going to do that,” Cavallero said.

Morris also noted that the CASE report did not take into account environmental requirements that are already mandated for marijuana growers, including compliance with the California Environmental Quality Act (CEQA) at the state and local levels.

Growers are required to begin reporting their environmental impact-mitigation efforts to the state by 2022, she noted, a mandate that wasn’t mentioned in the new report.

“We are taking environmental impacts into consideration … this, to us, seems a little bit over the top.”

Public comment is being taken on the proposals until July 31. Comments can be submitted via email to [email protected].

Barring a course change, the proposals are expected to be adopted in 2021 and would take effect Jan. 1, 2023.