Rate Cuts and Your Portfolio


After four rate hikes in 2018, we’re suddenly looking at the potential for two cuts in 2019. Here’s everything you need to know

In yesterday’s Digest, we started by pointing out how Wall Street cheered last Friday’s lackluster jobs report. Why? Because it believes this increases the odds of a rate cut (or two) by the Fed this year. Today, let’s dive into this a bit more.

You see, the narrative around rate cuts is changing dramatically — and fast. If you recall, just six months ago in its December meeting, the Fed raised target rates for the fourth time in 2018.

And yet in just a few months, here we are talking about not just one — but two rate cuts in 2019 — and potentially, by a sizeable amount. How this plays out will have a significant effect on your portfolio and mine.

So, today, let’s explore this more with the help of John Jagerson of Strategic Trader. Regular Digest readers recognize John as one of the smartest quant analysts in the business. If there’s anyone who can help us better understand the complexities of rate cuts, it’s John — and that’s something we need to tackle, because while Wall Street cheers cuts, the benefit they offer today might increase certain market challenges tomorrow.

***What rate cuts will mean for your stocks

Jeff: How about starting by giving us a broad overview on where we are with cuts?

John: Well, it seems like everyone wants the Fed to cut interest rates, and not just a little bit either. By the time the market closed this past Monday, traders in the massive bond futures market were pricing in a 78.2% chance that the Fed would cut the overnight interest rate by half a percentage point by the end of 2019. And although they’re in the minority, more than 10% of investors are pricing in the potential of a full percentage point cut.

Keep in mind, just last month, the same indicator showed that investors expected a 50% chance that the Fed wouldn’t cut the rate at all this year, so expectations are changing quickly.

Note: John provided me a chart below from the CME Group. It highlights the most recent expectations for where interest rates will be after the Fed’s December 2019 meeting. 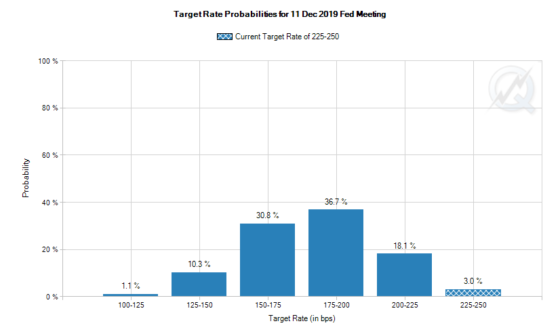 Jeff: Can you explain the significance of these rate-cute projections? Specifically, you reference “half a percentage point” and “a full percentage point.” Are these amounts a little? A lot? Normal? Abnormal?

John: The Fed likes to move slowly so as not to shock the market. So, if market conditions were normal but the economy just needed a little help, they may cut the rate by 1/4 percentage point. For example, in 2011, they basically unofficially cut the rate by 1/8th of a percentage point to improve liquidity. However, when they feel a crisis is coming, they make bigger moves, and if they cut by a full point over the next 6-months, that would be shocking.

Jeff: How shocking? Is there a past example that illustrates?

John: Besides the 2008 financial crisis, the last times the Fed took this level of action while the economy was still expanding was the 1997-1998 Asian Financial crisis and in the aftermath of the 1995 Mexican debt crisis. These were both profound threats to the global economy, so you can see that the market thinks the Fed should be responding to a full-blown crisis at this point. That tells us something about investor sentiment. Whether the Fed will cut the rate that dramatically or not, the biggest traders in the bond futures market think they should.

Jeff: What’s behind this sudden outcry for cuts? Is our economic health in that much danger?

John: I think the rate cut is an attempt to weaken the dollar and offset damage from the tariffs. However, while I think there is an argument in favor of easing, there’s two sides to it. Easier monetary policy while long-term rates are already in the toilet is unlikely to make any difference to consumer or business behavior. Long-term borrowing rates have already been falling for a while so this seems to be 100% about weakening the dollar to help soften the damage the trade wars are having on U.S. exports.

Jeff: I’ve personally been concerned that premature rate cuts just kick the can down the road. The analogy is that of a forest fire — rather than allowing a normal, small fire to burn, we prevent that fire as long as we can. But in doing so, it just allows more dead wood and debris to build up. So, when the fire eventually breaks out, all that debris just fuels a far bigger, worse fire than we would have experienced with the smaller burn.

John: There is that risk. Cutting rates like this can create bubbles which are already appearing in the corporate bond market. We saw how that can backfire when the oil market tanked in 2014 and a bunch of debt-heavy oil companies went out of business or were liquidated in fire sales. All rate cuts are designed to have short-term impacts while fiscal spending is designed for longer-term effects, however, I seriously doubt we will see any changes on the fiscal front until after the 2020 election.

Jeff: Let’s turn our attention to how this may affect the stock market. What should we expect?

John: The expectations for rate cut have likely been a major contributor to the recent rally. Investors have interpreted Fed Chairman, Jerome Powell’s recent public statements as receptive to a cut so the market has been rising. It has been extremely rare for the Fed not to cut close to what the market expects in the past, so some kind of action is probably a safe bet.

On the plus side, over the last several years, when the interest rate starts to approach 0% the market has rallied. Traders are willing to bid up stocks because they figure it will be cheaper for companies to borrow at lower interest rates in order to buy back their own shares or to spend on growth.

Jeff: But what happens if the Fed keeps cutting? Maybe getting the rate to zero or less?

John: Before the financial crisis, a zero or negative notional interest rate was never used, so we don’t have much experience with a market like that.

Sweden, Denmark, and Japan are cases we can use to gather a little guidance. Each economy has cut their notional interest rate below zero following the financial crisis.

The performance of economies with 0% or lower target rate is mixed. Swiss stocks have been flat and range bounce since the Swiss National Bank cut below zero in 2015.

Denmark dropped back to a negative interest rate in 2015 after initially going negative in 2012. The first time the Danish central bank went to negative rates, stocks boomed, but since the rate dropped back into negative territory, their stock averages are only up 20%, which isn’t great, but it could certainly be worse considering the risks in Europe. Japan’s central bank also went negative at the beginning of 2016 and Japanese indexes are up about 10% from their prior 2015 highs.

Jeff: So, what’s your best guess as to what rate cuts will mean for U.S. stocks?

John: Stocks with strong cash flow and that benefit from lower interest rates could easily break to new highs as the Fed cuts rates.

But when Central Banks like the Fed cut rates, they are usually doing so because they see problems in the near term that could negatively affect the economy. The closer an economy gets to 0% or below, the typical response in the stock market is to trade in a range with a mild bullish bias.

I think this is because the economic problems that drive rates towards 0% put a cap on stock prices, while easy monetary policy acts as a floor because buybacks and borrowing are cheap.

Jeff: Okay, so we’re potentially looking at a pop for some stocks as rates drop, but then sideways channeling for the broader market as we approach 0% rates. Thanks, John.

Our goal in the Digest is to help readers become wealthier and wiser investors.

With this goal of “wealthier” as our backdrop, please allow me to do something you’ll rarely see me do — blatantly ask you to investigate John’s Strategic Trader service.

The reason boils down to simple numbers …

If we’re near the end of this bull market, as many people think … If stocks may fail to continue posting double-digit returns … if, as John suggests, the broad market begins trading more “sideways” if the Fed takes rates near zero … then most average stock portfolios are going to post underwhelming, single-digit returns.

Now, compare “underwhelming” with 47.85% returns. You see, that’s what John and Wade have produced for Strategic Trader subscribers on their closed put-option trades.

Not only that, but the guys haven’t posted a losing, closed put-option trade in their last 87 attempts. That’s a track record of 87-for-87 closed winning put trades, for an average annualized return of 47.85%.

But this number is actually adjusted lower.

You see, over the last two weeks, John and Wade opened up five new positions that went nuts (in a good way) over the following few days. This enabled the guys to close those trades early, which skyrocketed their average annual return number. John didn’t feel it was fair to let those numbers distort his regular average, so 47.85% is actually low compared to the reality.

Now, here’s the kicker — John and Wade generate these big returns using an options strategy that can actually be safer than buying stocks outright. I realize that goes against the popular belief of “higher returns must come from higher risk” but just look at their track record — not a single losing put option trade in the last 87 trades. All while generating an average annualized return approaching 50%.

The best part of this is that if the broader stock market is, in fact, going to channel sideways for a while, then that’s actually a great environment for options trades.

That’s because the downside is usually limited, and John and Wade don’t need the market to move very much (or at all) upward in order to profit from their strategy.

I understand many people are suspicious of options. Rightfully so — when used incorrectly, they can be dangerous. But that’s not how John and Wade use them. And it’s certainly hard to argue against an 87-for-87 track record.

When used right, options are an incredibly powerful, cash-generating tool. If this bull is going to transition into a sideways market over the coming quarters, don’t you want that tool at your availability? Click here to begin learning more.