Rate Cuts Will Hurt This Sector …

While the market is cheering the high probability of rate cuts, there’s one sector that’s bracing for the damage they’ll inflict

Last week, the Fed all but guaranteed we’ll see at least one rate cut this year.

If (or rather “when”) this happens, it will be the first rate cut since 2008, and will mark a stark change in position for the Fed, which raised rates four times last year while repeatedly calling for “patience.”

It appears the time for patience is now behind us …

According to the CME Group’s FedWatch Tool, there’s a 100% chance of a rate-cut when the Fed meets in late July. The issue is simply the size of the cut — specifically, whether it will be 0.25% or 0.50%, as you can see below. At present, a quarter-point cut has the advantage, coming in at a 55% probability. 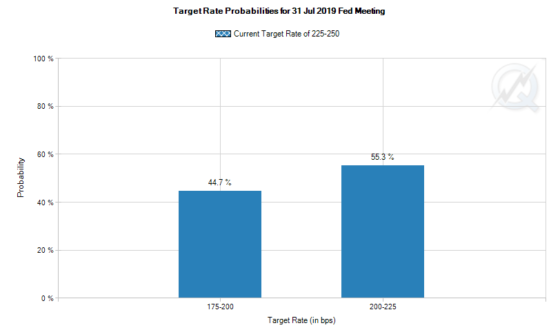 While the stock market cheered this news and has subsequently climbed to a new, all-time high, there’s one sector that hasn’t found rate-cuts quite as welcome.

Unfortunately, many investors own stocks belonging to this sector. So, in today’s Digest, let’s look at what’s happening and the potential effect on profits, then we’ll suggest an alternate investment for your portfolio.

***Lower interest rates are a significant headwind for this sector

So, what’s the area of the market coming under pressure as the Fed gears up for rate cuts?

By nature, banks are very sensitive to shifts in the health in the underlying economy. Economic booms drive demand for banks’ core profit centers — business loans, credit cards, and mortgages. Obviously, economic contractions do the opposite.

Bank are also highly sensitive to changes in interest rates, since rates are a key driver of banking profitability. That’s because most banks borrow money at low short-term interest rates then lend it out at higher long-term interest rates. The difference between those two rates is called the “interest rate spread.” Banks earn bigger profits as that spread widens.

But this cuts both ways. When rates fall, it compresses the interest rate spread, which eats into bank profits.

Given that it’s all but certain the Fed will be cutting rates, we must ask “to what extent would falling rates affect the bottom line of the big banks?”

A recently published Bank of America/Merrill Lynch investor note suggested that if the Fed lowers rates by 75 basis points to 1.5% to 1.75% by early 2020, it would reduce large-cap bank earnings by up to 10%.

In his July issue, Neil spoke to the challenges facing the banking sector. He starts by describing how much has changed over the past decade.

You see, before the regulatory changes enacted after the 2008 financial crisis, banks were the go-to for personal, business, and corporate loans. But the Dodd-Frank Act of 2010 placed a massive list of rules and regulations on banks in an effort to avoid prior mistakes. Regulators adopted policies and rule interpretations that saddled prohibitive costs on banks.

This meant that there was so much additional work that had to go into making loans and gathering deposits that the cost to earn each dollar of revenue soared.

It was reflected in the efficiency ratio, which is a measure of a bank’s profitability. Basically, anything above 50% is high. For example, the efficiency ratio for one of my banks pre-crash ran in the 25% range. Post 2008, those ratios rose into the 60%-70% range, meaning operating margins became extremely thin.

Then came the FOMC with its zero, or near zero, interest rate monetary policy. While stimulative for companies and households, for traditional banks it meant that there was little to no room to price loans against deposits that would leave them with profitable net interest margins (NIM).

In addition to this widening spread, Congress passed a series of regulatory reforms, including rolling back parts of the Dodd-Frank Act. Plus, regulatory agencies and the Fed eased up on certain banking rules and enforcement. The result of all this was net interest margins were beginning to improve in some of the better-run regional banks.

But it wouldn’t last …

But now, there are two recent developments that I want to call your attention to. First, in conversations with my banker friends, I’ve learned that the Fed and other bank regulators have been dragging their feet on implementing Congressional relief legislation.

Second, as we’ve seen recently, the market is shoving interest rates lower with help from the FOMC. So, improvements in efficiencies aren’t as big as they were legislated to be, and NIMs are now threatened again.

Given this change in banking conditions, Neil has just recommended selling two regional banks from his portfolio. If you hold regional banks in your portfolio, be aware of the pressure they’re going to come under as rates fall. You may no longer want exposure to this sector while these profit-headwinds are in place.

***So, where can a banking-sector-investor turn in light of these recent market developments?

For that answer, let’s go back to Neil:

Over the past decade, as banks were choked, alternative financial companies came into the market for lending and other banking services. These companies were not as burdened by bank regulation, particularly for business and corporate lending. These include private equity firms, investment funds and business development companies (BDCs).

Below you can see the growth of the Business Development Companies Total Return Index since 2009. 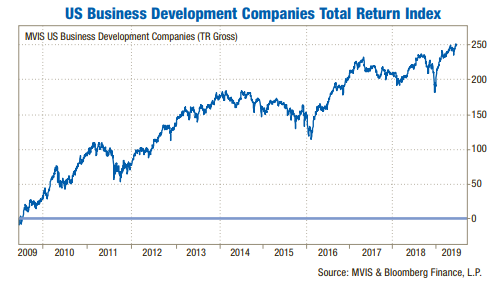 It turns out, Neil holds one of the best BDCs in the industry in his portfolio, and still considers it a “buy” today. This particular BDC focuses on lending to technology companies. The name is Hercules Capital (HTGC).

(Hercules) has been building its revenue growth, and it does so with an efficiency ratio of 52.50% … And its NIM is running at a whopping 9.30%.

Now, best of all for income investors, Hercules pays a dividend yielding 10.06%. And if you think this accounts for the majority of total gains, think again. As of the time of Neil’s issue, Hercules has climbed over 20% in 2019.

Wrapping up, if you hold banks in your portfolio, it’s time to give them a hard look. Rate cuts as 2019 rolls on point toward lower profits, and by extension, falling stock prices. As Neil suggests, there are safer places for your money today.