Amazon (NASDAQ:AMZN) is a massive company and it has an equally massive workforce. The company employs many people at its warehouses, where three factors are converging: shipping costs, the need for greater speed with the move to one-day Amazon Prime shipping, and increased labor costs. The company is now experimenting with equipment that addresses all three of these issues. And it could lead to Amazon job cuts. 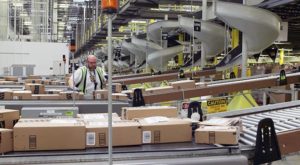 New machines rapidly box up orders and label them, building a custom-made box for each order as they do so. At each warehouse where the technology is deployed, there could be up to 24 Amazon job cuts as the robotic equipment replaces humans.

Reuters published an exclusive report this morning, detailing a program currently being tested at Amazon warehouses. According to Reuters’ sources, the company has installed technology at a number of its warehouses that scans the products for an order as they arrive on a conveyer belt, then wraps them in a custom-made box and slaps on a delivery label.

The machines — called CartonWrap — are made by an Italian company, and are capable of processing between 600 and 700 boxes per hour. That makes them four or five times more efficient than a human packer. Offsetting this efficiency somewhat is the need to have one employee stationed at the machine to help load custom orders, and another to keep stocking the machine with glue and sheets of cardboard.

A warehouse with the CartonWrap machines installed would also need to have a specially-trained technician onsite to deal with jams and other issues.

According to the Reuters report, the net gain for Amazon is the elimination of at least 24 positions per warehouse. If the CartonWrap machines are deployed at all Amazon U.S. warehouses, that would represent 1,300 Amazon job cuts.

As for expenditures, the costs of the equipment would be recovered within two years. Given the cost of employee wages, that’s a substantial win for the company, and a positive for Amazon stock.

Among American companies, Amazon has the second-largest number of employees. Wages are a big expense. That cost got even bigger last year when it announced a new $15 hourly minimum wage for all employees. That move reportedly cost $1.5 billion per year, and the resulting hit to AMZN earnings is likely to impact Amazon stock value.

The Amazon job cuts would help a bit to offset that increased expenditure.

For years, Amazon has had issues where small products were shipped in ridiculously large boxes. This is not only bad PR, but it costs the company more in shipping fees. And shipment costs for a company with Amazon’s scale are huge — big enough that AMZN launched its own delivery service last year, competing with carriers like UPS (NYSE:UPS). The CartonWrap machines customize boxes to minimize wasted space, which means lower cost through carriers — and more packages on a truck for its own delivery fleet.

Finally, in April Amazon announced it would begin rolling out one-day Prime delivery.

Amazon stock has been feeling the effect of slowing e-commerce sales, and improving Prime from two-day to one-day service is seen as a way to boost those shopping numbers. But one-day shipping requires orders to be turned around much more quickly. Replacing human order boxers with CartonWrap machines that are four to five times faster would go a long way toward achieving one-day Prime delivery goal.

AMZN has been working to put a positive spin on its role as the country’s second-largest employer. Headlines decrying Amazon job cuts would not be the desired outcome. The company has not made the final decision about wide scale deployment of the CartonWrap technology, but if its does there is a plan.

“We are piloting this new technology with the goal of increasing safety, speeding up delivery times and adding efficiency across our network. We expect the efficiency savings will be re-invested in new services for customers, where new jobs will continue to be created.”

Reuters sources say that means the company will count on attrition and shuffling employees to other positions, while playing up the safety angle. That would avoid those Amazon job cuts being reported as actual layoffs and ensure the new robots are a win for Amazon stock on multiple fronts.