Amazon (NASDAQ:AMZN) announced that New York City now has its second Amazon Go store, which is located in Midtown Manhattan and marks yet another step in the e-commerce giant’s continued expansion across the U.S. and the rest of the world. 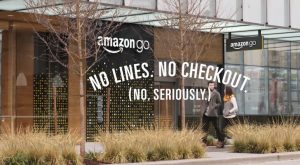 The tech giant opened its first cashier-free convenience store in New York only a month ago, and now we have the second such location in the Big Apple. The new location is located at 300 Park Ave. in Midtown Manhattan and it opened its doors on Tuesday, June 11.

It is 1,700 square feet in size and it marks the 13th Amazon Go location in the U.S. “New York really fits … what we’re looking for,” said Cameron Janes, the company’s vice president of physical stores. “It’s high density. … Lots of people on the go. It’s a great fit for us.”

The first such NYC location was rolled out on May 7, located at the Brookfield Place shopping center in downtown. Both locations make sense for Amazon as they are both in busy business areas, which are likely to attract attention from shoppers after they call it a day at the office.

It is unclear how many of these locations we will eventually get in NYC as Janes did not make a statement on the matter, but we may soon have thousands of Amazon Go stores by 2021.

AMZN stock increased a fraction of a percentage on Tuesday off the news.