Tempting as It May Be, Nokia Stock Isn’t Going Anywhere

Ever since Apple (NASDAQ:AAPL) launched its now-iconic iPhone, Nokia (NYSE:NOK) has been in crisis mode. Of course, what has consistently dragged on the company is that it has never really left that mode. Nokia stock peaked around the $40 level in 2007. Today, you can pick up shares for a little over $5.

Of course, with such a low price point, this attracts contrarian buyers. After all, we’re talking about Nokia stock, not some nameless, faceless upstart tooling around in the pink sheets. True, the Nokia brand isn’t anywhere near as relevant as it once was. However, the Finnish telecom firm very much has clout.

This is evident through the company’s many wheeling and dealings. Recently, NOK announced that China Unicom (NYSE:CHU) selected Nokia’s solution for the Chinese telecom’s 4G and 5G networks . Significantly, China Unicom has a very ambitious target to deliver 5G wireless connectivity within this year.

Plus, Nokia stock benefits from geopolitical tailwinds. Earlier this year, I wrote that our own telecom giant AT&T (NYSE:T) has “critical value beyond the print.”

Primarily, what underlines the U.S.-China trade war is the two sides’ rush to dominate next-generation technologies. Thus, companies like AT&T represent more than just capitalistic concerns; rather, they facilitate the pathway for these technologies to advance American interests.

Second, the trade war has temporarily erased Huawei – the largest supplier of mobile network technology – from the picture. That gives an obvious opportunity for NOK, and by logical deduction, Nokia stock.

And as our own James Brumley pointed out, Nokia has struck with multiple awarded contracts. But is that enough for NOK stock?

NOK Stock and the Fundamentals

Admittedly, when I saw Brumley’s contribution towards Nokia stock, I only read the headlines. But it was enough of a catchy one that I decided to look at the price chart before reading what my colleague had to say.

Again, at $5, NOK stock is a very tempting mistress. Not only is it still a relatively well-known brand, but it’s also levered to an extremely viable business. Everyone that’s anyone is racing for 5G dominance. Moreover, 5G has serious geopolitical and even military implications.

Such an environment suggests that the next-gen telecom network will provide robust revenue channels. That’s especially true for Nokia if it can claim first-to-market advantages in specific regions or technical subsegments.

And to Brumley’s argument, Nokia is securing contracts with big names, such as China Mobile (NYSE:CHL), Sprint (NYSE:S), T-Mobile (NASDAQ:TMUS) and BT Group (NYSE:BT). Obviously, these are big tailwinds for NOK stock.

But what isn’t so appealing is trading sentiment. Specifically, Nokia has no discernible correlation with revenue trends. For instance, from the first quarter of 2013 through Q1 2019, Nokia shares and revenue had a correlation coefficient of -20%. Between Q1 2016 through Q1 2019, the correlation inversely strengthened to 34%. However, this is still not a statistically significant relationship. 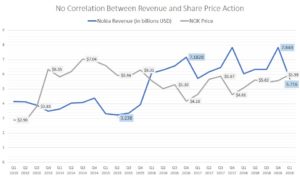 Why does this matter? Because you really want your core investments to make rational sense. In other words, if Nokia’s management says they’re on a recovery path, I don’t expect NOK stock to jump just on that alone. However, if Nokia proved its point through sales increases, I expect shares to steadily tick higher.

Nokia Stock Is an Interpretive Artwork

In my last article about NOK stock, I suggested that it was nothing more than a short-term trade. Largely, I feel the same way because of the lack of rationality in the market.

However, I concede that this lack of rationality also presents an opportunity. To quote Brumley, Nokia “has gotten little to no credit for its newly-won contracts, as investors struggle to get past the company’s disappointing first-quarter results.”

Perhaps the reason why Nokia stock has little correlation with the fundamentals is that most folks simply don’t recognize the opportunity. Therefore, if you take the risk now, you potentially have a front-row seat to a massive recovery.

But it could also mean that the markets have reason to doubt Nokia. Brumley even conceded that Q2 2019 numbers may not look great.

And let’s remind ourselves why Q1 figures were so disappointing: Nokia failed to supply 5G telecom equipment in time. Stated differently, if you buy Nokia stock, you’re doing so on technical potential, not on proven fundamentals.

As of this writing, Josh Enomoto is long T stock.