The Decline of the U.S.

One of the most successful hedge fund managers in the world is worried.

His concern isn’t based on a sector overvaluation, or an asset bubble, or even a potential market correction.

It relates directly to the foundation of the U.S. economy and its source as a global power.

If things don’t change, he sees stunted economic growth, fewer opportunities for Americans to get ahead, and a global loss of faith in the dollar that lowers our collective standard of living.

The man behind these concerns is Ray Dalio, manager of Bridgewater Associates.

You may recognize Dalio’s name. He famously predicted the Global Financial Crisis in 2017.

In fact, Dalio has a history of nailing market calls. This is, in part, why he now has about $150 billion of assets under management, and one of the best investment track records in the industry.

Here’s Dalio with an overview of his concern:

There are three problems that are coming together, so it’s important to understand them individually and how they collectively make a bigger problem.

There is a money and credit cycle problem, a wealth and values gap problem, and an emerging great power challenging the existing dominant power problem.

What’s going on is an economic downturn together with a large wealth gap and the rising power of China challenging the existing power of the United States.

While our Digests are usually narrower in scope — perhaps how our analysts are viewing a stock, or a sector, or an asset class — today, let’s look bigger.

After all, which stock, sector, or asset class to trust with your wealth is, in large part, determined by the tectonic shifts happening on a macro level.

And since Dalio is seeing red flags with the macroeconomic health of the United States, at a minimum, each of us should be aware of what he’s identifying — as well as what he believes investors must do today to prepare.

***”There is a money and credit cycle problem”

In Dalio’s recent interview with Marketwatch, he spoke to each challenge facing the U.S. economy.

Here he is, establishing context for our current monetary and credit cycle problem:

If you look at British history, the development of rival countries led them to lose their competitive advantages. Their finances were bad because they had accumulated a lot of debt.

So, after World War II those trends went against them. Then they had the Suez Canal incident and they were no longer a world power and the British pound is no longer a reserve currency.

These diseases almost always play out the same way.

The United States’ relative position in the world, which was dominant in almost all these categories at the beginning of this world order in 1945, has declined and is exhibiting real signs that should raise worries.

There’s a lot of baggage.

The U.S. has a lot of debt, which is adding to the hurdles that typically drag an economy down, so in order to succeed, you have to do a pretty big debt restructuring. History shows what kind of a challenge that is.

Dalio goes on to note that the U.S. is in the late stages of a debt cycle and money cycle. What that means is we’re producing mountains of debt alongside an avalanche of newly printed money.

For some context on our debt, the U.S. budget deficit exploded to $2.8 trillion during the first 10 months of fiscal 2020. Compare that with $867 billion in the same period a year earlier.

By the way, if you object to this saying “well, that’s just the coronavirus,” then below is a chart showing consecutive deficit increases since 2015 through last year. 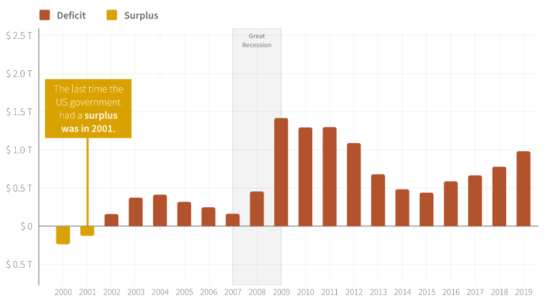 Back to Dalio, he believes that as a reserve currency status, the U.S. dollar is still dominant. However, that position is being threatened by all of this debt and printing.

He isn’t the only one who feels this way.

In July, Goldman Sachs wrote a note to clients stating “real concerns around the longevity of the U.S. dollar as a reserve currency have started to emerge.”

Here’s Dalio on the pain this would cause were it to happen:

The United States doesn’t have a good income statement and balance sheet in dealing with the rest of the world.

It is running a deficit to the rest of the world that is financed by borrowing money so that we are producing liabilities.

Our living standards are based on our spending, not on our income statement or balance sheet. If the U.S. loses that ability and it doesn’t force itself to be more productive, one day it will lose that ability to borrow and then will have to cut spending, which is painful.

When that pain happens at a time when you have the population at each other’s throats over money, that’s a toxic combination. People can’t take a downturn and have less buying power.

So, necessarily the poor will have to be getting money from the rich and the rich are going to want to prevent that, and then if it gets bad enough, it messes up productivity.

The wealth gap is something we’ve discussed at length here in the Digest. We’ve often quoted from our own macro specialist, Eric Fry, many times, highlighting his term “The Technochasm.”

This is the name Eric has given to describe the widening wealth gap that’s happening in America thanks in large part to huge investment gains coming from select, technology investments.

… capitalism is a fabulous way of creating incentives and innovation and of allocating resources to create productivity. All successful countries have uses for it …

But capitalism also produces large wealth gaps that produce opportunity gaps, which threaten the system in the ways we are seeing now.

As the number of people receiving equal opportunities diminishes, Dalio believes this moves beyond just a social unfairness. It also undermines the productivity of the broader economy.

Back to Dalio on the end-result:

Then the have-nots want to tear down the capitalist system at a time of bad economic conditions.

That dynamic has always existed in history and it’s happening now.

For Dalio’s third concern, he points toward the rise of China:

Militarily, the U.S. is stronger, but China also has come on very strong and is probably stronger in the waters close to China that include Taiwan and other disputed areas.

Finances for both countries are challenging, but for the U.S. more so …

There’s a life cycle. You’re born and you die.

As you get older you can see certain things that are symptoms of being later on in life. To know the life cycle and to know that these symptoms are emerging is what I’m trying to convey.

The United States is a 75-year-old empire and it is exhibiting signs of decline.

***So, what should an investor do in light of these concerns?

Dalio offers two suggestions, both of which we’ve detailed at length here in the Digest:

The printing of money and the debt should make you aware of that.

That’s why financial asset prices have gone up — stocks, gold — because of the debt and money creation.

You don’t want to own the thing you think is safest — cash.

In Monday’s Digest, we highlighted the decline in the dollar since the spring.

We noted how the dollar’s current trading range is roughly 8% below its spring trading range — which is a huge move for a currency.

(Though as you can see below, it has ticked up recently.) 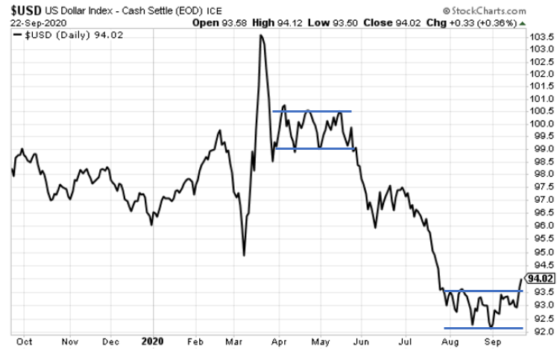 We’ve also been urging readers to allocate some of their wealth to gold (and more recently, silver) since January of 2019.

Back to Dalio, with his second recommendation:

Second, know how to diversify well.

That includes diversification of countries, currencies and assets, because wealth is not so much destroyed as it shifts.

When something goes down, something else is going up so you have to look at all things on a relative basis.

Diversify well and worry about the value of cash.

Most recently, we touched on this subject when providing readers a free e-book from our CEO, Brian Hunt, titled “The Risk Vs Reward Manifesto.”

When it comes to successful investment and Risk Vs. Reward mastery, asset allocation is 100 times more important than stock picking.

Asset allocation is the part of your investment strategy that dictates how much of your money you place in broad asset classes like stocks, bonds, cash, cryptocurrencies, precious metals, and real estate.

Over the course of your career as an investor, asset allocation will have a MUCH greater impact on your wealth than stock picking will have.

Please make time to download and read Brian’s book if you haven’t already.

***Controlling what you’re able to control

You and I have little control over how the U.S. government handles its colossal debt problem.

We can’t control the ascendancy of China.

And we can’t fix the wealth gap.

However, what we can do is look ahead at the likely outcome of these landmine issues — and prepare ourselves.

Here’s Dalio on what he fears could lie ahead:

… we’re going to spend in an unlimited way and deal with that by creating debt that won’t ever be paid back, and we will risk losing the reserve currency status of the dollar.

If we get into that position — and we’re very close — things will get much worse because we are living on borrowed money that’s financing our consumption.

So, what can you do?

Simple — diversify your assets, and make sure your wealth isn’t overly concentrated in U.S. dollars.

These are easy steps that all of us needs to take today.