The Election and Your Stocks

At 4 p.m. ET, our crypto specialist, Matt McCall, will be sitting down with crypto visionary and one of bitcoin’s first tycoons, Charlie Shrem.

The two experts believe that one of the biggest investment events in modern history is about to kick off. And it directly relates to blockchain and a small group of select cryptocurrencies.

According to Matt and Charlie, what we’re about to see could enable even modest investments to turn into million-dollar fortunes.

At this afternoon’s event, called “The Awakening,” you’ll get all the details about what’s happening and why. Matt and Charlie will even give away their #1 altcoin investment recommendation, totally free. It’s their gift to you for attending.

If there’s one event that could change your financial life, it’s this.

It will be fascinating. It will be educational — I doubt you’ll think of cryptocurrencies the same way again. And my guest believes it could hand you a fortune that most people only dream of.

Just click here to reserve your seat and get the details on how to join. Hope to see you there.

***Less than 45 days until the presidential election

I think it’s safe to say that this presidential election is far different from any other I’ve witnessed!

The reality is the coronavirus pandemic threw the election cycle and the stock market for a loop, which, in turn, created a lot of uncertainty this presidential election year.

He noted that investors are growing nervous about what a contested election might mean for their portfolios.

In fact, it was one of the most-asked-about topics during Louis’ latest Platinum Growth Club Live Chat Event.

So, how is this market legend viewing the markets in light of election uncertainty?

There’s no denying that a contested presidential election will definitely throw a “wrench in the works,” further weaken the U.S. dollar and likely trigger a stock market selloff.

The worst possible scenario is that President Trump appears to win the electoral college but then loses several days later as absentee ballots are counted.

Both sides will then contest the presidential election results, which means the Speaker of the House, Nancy Pelosi, will become the next president in January.

***What happens if Biden wins outright?

Louis suggests the stock market may be hit with some year-end tax selling in anticipation of higher dividend and capital gains taxes under a Biden presidency.

But then he points toward what will be the real issue that will affect just how volatile the markets become:

… a few weeks ago, Joe Biden stated that he would not raise taxes on anyone making less than $400,000 per year, which encompasses approximately 90% of small businesses.

This is where the election is going to be decided — among the business community, the self-employed, the folks living in the suburbs.

Since Joe Biden’s tax policy is unclear, it is imperative that his proposed tax increases, especially on qualified dividend and capital gains, are clarified to minimize year-end selling.

So, a Biden capital-gain-policy that remains vague (leaving Wall Street anxious about the threat of significantly higher tax-rates) could weigh heavily on market prices.

***And what if Trump takes it?

… since President Trump voters seem much more energized than Joe Biden voters, I believe there will be a low Democratic voter turnout and a high Republican voter turnout.

In addition, President Trump is polling well with Hispanic voters, so I would not be surprised if the polls break to President Trump, especially with all the recent chaos about opening schools and ongoing social unrest.

Louis believes that if President Trump has a decisive victory, we’ll see a relief rally.

***The good news, regardless of who wins

This will likely be one of the most contentious elections in history. But even if your candidate doesn’t win, and a worst-case scenario plays out, Louis is confident markets will bounce back.

The first reason why is a weakening dollar.

Below is a chart of the U.S. Dollar Index.

This is a measure of the value of the U.S. dollar relative to the value of a basket of six major global currencies — the Euro, Swiss Franc, Japanese Yen, Canadian dollar, British pound, and Swedish Krona.

Below, you’ll see the dollar fall, then spike in the panic of the March sell-off. But then it drops steadily.

This is a big move for a currency. 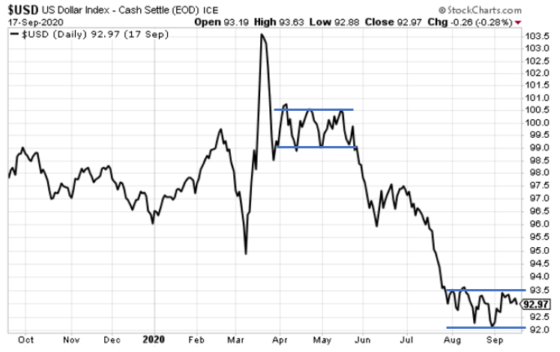 Back to Louis on the significance of this weaker dollar:

(This) is a windfall for multinationals.

Simply put, a weak dollar means bigger profits for the multinationals, as their products are cheaper overseas.

Once the international currencies are converted back to dollars, it pads the multinationals’ sales.

As we’ve noted here in the Digest, roughly 40% of the sales for the S&P are derived overseas. So, this is a powerful tailwind.

After pointing toward the federal government’s $3.3 trillion deficit as a reason it will need to continue printing money (which reinforces dollar weakness), Louis brings up our ultralow interest rate environment.

… on Wednesday, the Federal Reserve announced that it will keep interest rates at or near zero through 2023 until the U.S. economy is on stronger footing.

Fed Chairman Jerome Powell stated, “rates will remain highly accommodative until the economy is far along in this recovery.”

But even if the Fed wanted to raise rates, it can’t because of the huge federal deficit.

So, what do you do when interest rates are set to stay low for the foreseeable future?

With nowhere else to go, yield-hungry investors will continue to flock to dividend-paying stocks.

***A strong market is on the other side of election chaos

Louis wraps up his update on a positive tone:

So if you’re worried about the presidential election having a lasting negative impact on your portfolio, don’t be.

Sure, it might get a little bumpy, but the long-term trend for the stock market continues to point up.

Instead, now is the time to focus on which stocks you should be investing in.

To Louis’ point, even though the market will ride out weakness, that doesn’t mean all stock will.

As we’ve noted many times here in the Digest, under the hood of “the market” are thousands of stocks with wildly different prospects. Given this, what happens in the market can be unrelated to what’s happening in your specific portfolio.

If you’re not invested in strength, your returns can suffer even in a strong market. That’s why making sure you’re in high-quality stocks is far more important than who takes the White House. Here’s Louis with the final word on this:

The bottom line: Don’t let the fear of a contested election scare you out of the market.

Instead, invest in the high-quality stocks set to benefit from the third-quarter earnings season.

This will put your portfolio in prime position for profits for the rest of the year.