The Next Supercycle Is Here

The stock price of mining company, Freeport-McMoRan Inc (FCX), had just crashed 59% on the year. 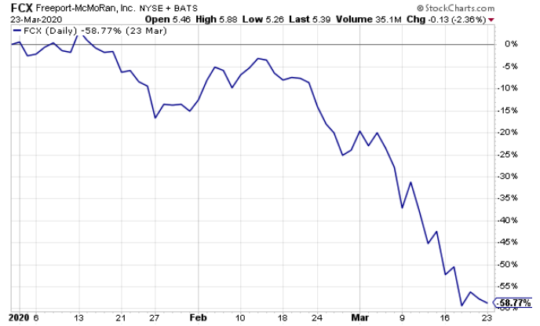 This was back in March.

With no bottom in sight, and the economy facing an indefinite lock-down, the future appeared grim for the mining giant.

Eric Fry saw something else:

Freeport’s decimated share price discounts most of [the risks]. It does not price in any potential upside.

The biggest potential kicker for the stock is probably just one word: normal. If the copper market simply returned to something resembling normal, Freeport’s share price could double fairly quickly from current levels.

Since its March-low, FXC has soared nearly 170%. 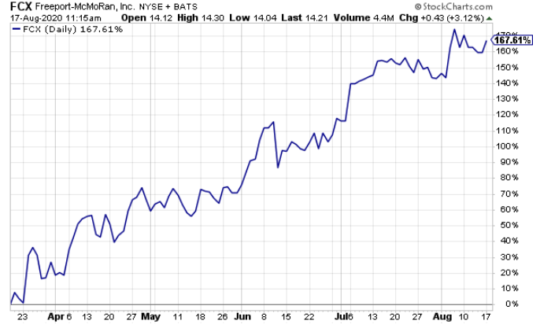 What’s more interesting than Eric’s accurate FCX prediction was his post-mortem on this crash-and-rally:

“Prices are liars,” one well-known hedge fund manager once told me. He was right …

Sometimes prices tell little white lies. Other times they weave yarns as incredible and outlandish as any ancient mariner’s …

Simply stated, deceptions are rife in the financial markets.

But here’s the good news: The greatest deceptions produce the most compelling investment opportunities.

Today, we’re looking at one of the most compelling investment opportunities to come along in decades.

It involves something called a “commodity supercycle,” coupled with “deceitful” stock prices, as Eric might call them.

In fact, the entire natural resources sector may be playing fast and loose with the truth.

The relatively depressed prices that typify the sector are concealing the realities about their superior growth prospects.

Thanks to a newly hatched commodity supercycle, many resource stocks possess considerable profit potential … perhaps their greatest potential in 20 years.

With all this in mind, in today’s Digest, let’s see how a master commodities investor is viewing one of the best sector set-ups to come along in decades.

***An introduction to a “commodity supercycle”

For readers less familiar, Eric Fry, is InvestorPlace’s global macro specialist. This means he starts his investment analysis by looking at the big-picture forces that are driving global markets and creating opportunities.

That could lead him to, say, an emerging market stock, or an opportunity in South American currencies, or as in this case, a potential boom in commodities.

And if anyone knows commodities, it’s Eric. His career is littered with triple-digit commodity-winners.

Even as I write, looking at Eric’s Investment Report portfolio, I’m seeing open commodities trades with gains of 194%, 133%, and 71%, to name a few.

But returning to our main topic, what exactly is a commodity supercycle?

These are called “supercycles.”

No two supercycles are identical. But they all share two distinct traits:

1. In their youth, they produce huge investment gains.

2. In their advanced years, they produce huge investment losses.

That’s why it’s so important to pay attention to them early on. They grow up so fast.

In Eric’s most recent issue of Fry’s Investment Report, he went on to explain how he believes the previous commodity supercycle lasted 21 years … and ended five months ago.

You can see the rise and fall of this supercycle below by looking at the TR/CC CRB Commodity Index (CRB).

Notice how CRB quadrupled between 1999 and 2008, only to then lose 77%, which completely erased all its prior supercycle gains. 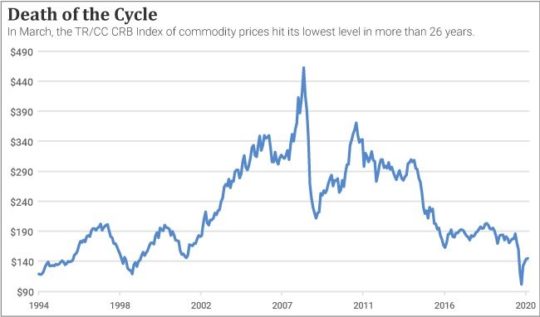 Obviously, without the benefit of hindsight, no one can be certain that this year’s commodity rally is the birth of a new supercycle.

But the devastating commodity bear market of the last decade was exactly the sort of event that creates conditions for a new bull market.

***How the last supercycle bust has set up today’s opportunity

In his issue, Eric explains that when commodity prices fall, resource companies lose money. As losses mount, companies do whatever they can to preserve cash.

This often means shutting down money-losing operations and halting exploration activity. And that reduces the global supply of the commodity.

Meanwhile, many weak companies can’t survive in a low-price market. So, they close doors completely. This further reduces the global supply of the commodity.

During the worst phase of this severe bear market, the combined annual earnings of the world’s 40 largest resource companies imploded from a profit of $132 billion to a loss of $106 billion …

The most destructive phase of the bear market in base metals ended in 2016. But because their prices have remained relatively low during the last few years, most mining companies have continued to pinch pennies. They have been slow to ramp up exploration activity, and even slower to advance projects into full production.

There are more mothballs in the mining sector than in a warehouse full of wool sweaters.

But in typical boom/bust pattern, this destruction is merely creating the conditions for an ensuing boom. Or as Eric writes:

… the death throes of one commodity supercycle breathes life into the following supercycle.

And that’s exactly what appears to be underway.

For the last few years, global production of metals like iron, zinc, copper, nickel, and graphite have been flatlining.

Meanwhile, Eric notes how demand for most metals has continued to climb higher. That’s why their prices are starting to rise from multiyear lows … and are likely to rise much higher over the coming years:

During the last four months, the CRB Index of commodity prices has bounced about 40%. But even so, it remains nearly 70% below the all-time high it hit in 2008. That means the upside potential is large.

But there’s a reason why this particular supercycle might be one for the ages. It involves a paradigm shift.

Back to Eric to explain:

That paradigm shift is what I’ve been calling the Second Electric Revolution — the massive global migration toward “green technologies” like electric vehicles (EVs), renewable energy, and energy storage.

All of these innovations are “metal hogs.”

The average solar power project, for example, requires about five times as much copper per megawatt of capacity as a conventional fossil fuel plant. Offshore wind farms demand about 10 times as much.

The global battery market is also gobbling up a growing percentage of global metal supplies.

Demand from lithium-ion batteries has grown more than 20-fold in the past 10 years.

Looking ahead, Bloomberg New Energy Finance (BNEF) predicts nickel demand for EV batteries will skyrocket 14 times over by 2030. The chart below shows a range of similarly mind-boggling demand projections for other industrial metals. 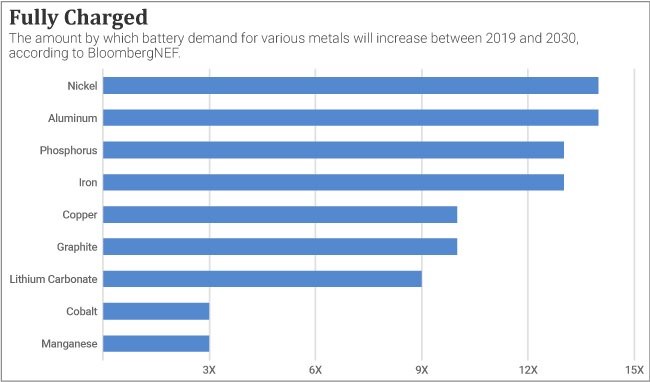 As to potential gains from this supercycle, Eric lays out a few hypotheticals involving the CRB Index.

If it climbs to its all-time-high, that would mean 220% growth …

***How to play this commodities supercycle

In past cycles, Eric has recommended various resource stocks — from nickel and copper miners, to uranium producers, to oil and gas companies.

One such play is the stock from the top of this Digest — Freeport-McMoRan.

You could also look at Antofagasta Plc (ANFGF), a Chilean copper miner.

For Eric’s actual Investment Report recommendation, he’s found a low-cost way to get exposure to both copper and nickel.

If the prices of these commodities take off as Eric anticipates, this recommendation will boom. You can learn more about it as an Investment Report subscriber by clicking here.

As we wrap up, I’ll gave Eric the final word:

… the trend is clear. And this trend points quite clearly to booming demand for battery metals.

As these metals climb from their lows, look for them to lead the entire CRB Index higher. This new commodity supercycle could produce the mother of all mean regressions …

The base metals boom is here … and so is a brand-new commodity supercycle.