The Nokia Stock Consensus Target Isn’t Even a Stretch

For a brief few days, it looked as if Nokia (NYSE:NOK) might be on the mend. Off nearly 30% from its January peak as of mid-May, NOK stock bounced nearly 10% after the U.S. banned imported products made by rival Huawei. 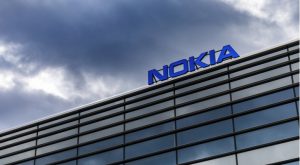 That budding uptrend, however, was up-ended on Thursday, with Nokia stock tumbling 3.0% for no news-driven reason.

It’s difficult to ferret out the impact the broad market tide has had on NOK stock. At times the Nokia stock price has moved in tandem with the herd; other times, it hasn’t. Shares have been particularly weak since March, and downright terrible since late April, severely underperforming the overall market.

That disconnect, however, may also prove to be an opportunity right now, in an environment that looks and feels more bearish than not. Indeed, the trip back to the consensus target price of $6.54 is a relatively short and straightforward one, especially given the news backdrop.

Lots of Bark, Not Much Bite

It’s not without its problems. Chief among them is the bevy of class-action lawsuits in preparation right now, arguing that Nokia’s due diligence regarding the 2015 acquisition of Alcatel-Lucent was inadequate. The company disclosed in March that some Alcatel-Lucent practices were concerning, and possibly not compliant with all applicable laws.

In the meantime, Nokia has fallen into the same quagmire as Qualcomm (NASDAQ:QCOM), facing lawsuits that claim the company — in violation of U.S. antitrust law — conspired with other patent holders to improperly inflate the price of some of its wireless connectivity technologies used in automobiles. The EU’s antitrust regulators, at the request of Daimler (OTCMKTS:DMLRY), are also probing the same possibility in preparation of a suit.

There’s probably something to it. The proverbial “pushing of the envelope” is the norm on the modern technology landscape, with collusion (spoken and unspoken) not being entirely uncommon and lawsuits — merited or not — serving as a means of disrupting rivals. Even the venerable Apple (NASDAQ:AAPL) recently lost a fairly flimsy patent suit against Qualcomm, extending a long-standing saga between the two tech giants.

As history has shown though — particularly with Qualcomm and Apple — these patent-driven problems mean very little in the end. Apple’s total liability with its recent loss to Qualcomm? Only $31 million — petty cash for the multi-billion dollar company.

Indeed, not even regulatory bodies wield as big of a weapon as the headlines generally imply, setting the stage for what could be an easy rebound for NOK stock, especially in light of the United States’ recent ban on China’s Huawei-made technology.

Don’t be too detracted by the headlines.

With Huawei Out of the Way…

Not even Nokia CEO Rajeev Suri was willing to say exactly how much he thought it might prove a boon to the company. But, he was willing to say that with Huawei’s 5G tech out of the picture for the time being, “Perhaps there is long term opportunity.”

He was underselling the prospect.

The world has largely responded to the White House’s plea to assist it in keeping China, via Huawei, in check. Panasonic (OTCMKTS:PCRFY) is re-scrutinizing its business relationship with the company. Google, which maintains the Android operating system employed by Huawei smartphones, will for the time being not facilitate any OS updates of Huawei devices. UK-based chipmaker ARM is suspending business with China’s Huawei as well, accommodating the United States’ action.

These are all actions that will indirectly be interpreted as positives for Nokia, because they are.

Not that the company wasn’t already making some bigger waves on its own. Even as Suri suggested Nokia is a few weeks behind in the 5G race, he also noted at this month’s shareholder meeting that NOK now has “37 5G commercial contracts — 20 with named customers including T-Mobile (NASDAQ:TMUS), AT&T (NYSE:T), STC, and Telia — and more than half of them include wider portfolio elements that our competitors cannot match.”

Looking Ahead for NOK Stock

NOK stock still travels in something of a vacuum, doing its own thing rather than the market’s thing. This could be good, or bad, or both, depending on the backdrop.

Given the opportunity and the technical context at hand, however, it’s difficult to think Nokia stock won’t be back at $6.54 sooner than later; its sheer volatility may do most of that work. Zooming out to the weekly chart of Nokia stock it’s clear that wild, wide swings are the norm.

Also note that the upper edge of the two-year trading range is around $6.64, just above the consensus target of $6.54. That leaves NOK stock plenty of leeway. 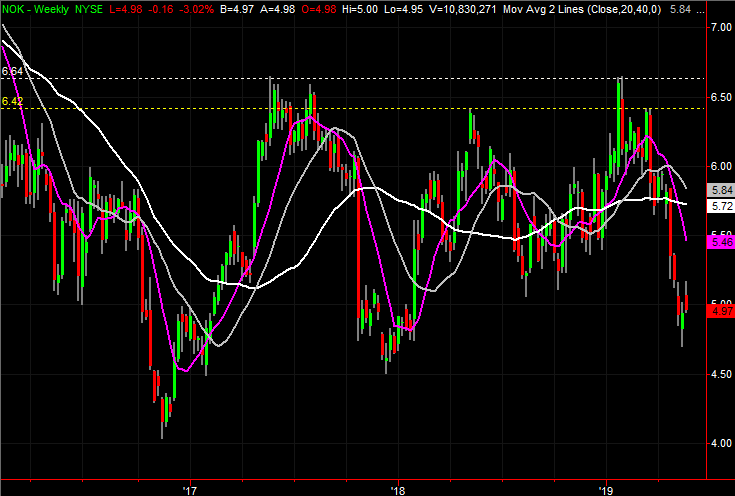 Again, the lawsuits mean little, in the end. The addition of several new 5G contracts on top of previously-made ones, however, is just the kind of rhetoric that can lift a stock out of the drugs.

To that end, analysts are hopeful again.

While revenue is expected to slip about 3% this year, the pros say it will grow by the same amount next year. That should drive this year’s projected profit of 25 cents per share of NOK stock to 39 cents next year, on the heels of Nokia’s 5G ramp-up. The company wouldn’t even really have to turn that revenue into a meaningful profit though. The mere promise should be enough.

Welcome to the game… understanding the difference between news and noise, and figuring out how the crowd is going to interpret each.