The Stealth Tax Is Coming

Astronomical government debt … what it will mean for the U.S. Dollar … how to protect your wealth

As I write Monday morning, bitcoin has soared nearly 13% on the day … 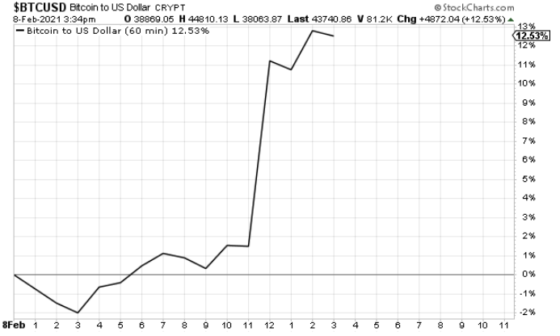 Behind this surge is the news that Tesla has purchased $1.5 billion worth of bitcoin. Additionally, it will begin accepting bitcoin as payment for its products.

I do at this point think bitcoin is a good thing, and I am a supporter of bitcoin.

Instead, let’s focus on one major reason why investors are increasingly finding crypto attractive. This reason points toward a huge influence on your wealth over the coming decade.

Understand what’s happening and you’ll be in a position to better preserve your wealth in the years to come — even watch it climb significantly higher.

But for most Americans who don’t see what’s coming, who don’t take preventative steps, it’s going to usher in significant financial damage.

When we’re finished today, we’re going to ask for your input on this important issue. So, let’s walk through this topic together, then we’d love to get your thoughts.

***The U.S. government will spend more on COVID-19 than it did on World War II

Below is a chart from August 2020. It shows the U.S. government response to COVID-19 coming in at $3.3 trillion, which puts it as the second most expensive crisis in U.S. history, behind only WWII at nearly $4.7 trillion (adjusted for inflation).

Of course, the government has spent far more money since August. And as you’ll see below, the spending is only intensifying.

In other words, move over World War II. 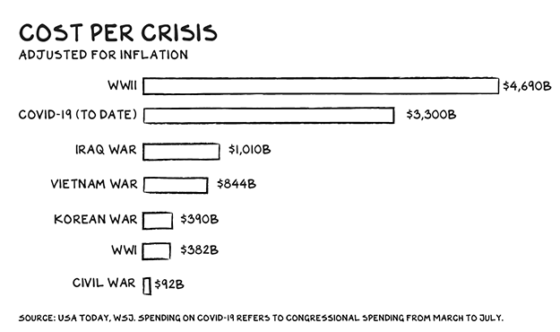 Unfortunately, when we’re talking about trillions of dollars, the scope of this enormity is nearly impossible to grasp. So, let’s add some context to give you an idea of just how mind-blowing this is.

Let’s say you have one million seconds.

How many days is that?

And one trillion seconds?

That would equal 317 centuries …

Think of it this way …

If you turned the clock back one billion seconds, you’d be in 1990.

But if you turned it back one trillion seconds, you’d be somewhere around 30,000 B.C.

We could see the final COVID bill come in somewhere between $7 – $10 trillion.

And if you think that’s bad, I hate to break it to you, but the U.S. government now owes nearly $28 trillion to lenders around the globe.

But remember, there’s a big difference between U.S. citizens and U.S. taxpayers. We have a lot of non-taxpayers here.

Keep your calculators out. We’re not done …

***Last month, Biden debuted the first of what will be two spending initiatives, with a price tag of about $1.9 trillion

If passed, it will be the second largest government price tag ever — behind only the CARES Act last March.

This first spending initiative will focus on stimulus checks, jobless benefits, state and local aid, and so on.

The second initiative comes later. That one will focus mostly on infrastructure. And its estimated price tag?

And keep in mind, Biden has reversed Trump’s plan to cut $27.4 billion of “wasteful spending.”

We’ll just add these trillions to our nearly-$28-trillion debt pile. After all, what’s another trillion here or there?

***Remember, this is just our existing, real-time debt — it doesn’t include our unfunded liabilities

What exactly are those?

Think all of the “stuff” the U.S. government has promised to pay out to its citizens in the future. You have Social Security, Medicaid, pensions, and various social safety-net programs, among other things.

These expenses are very real … they’re enormous … yet they’re not reflected in that nearly-$28 trillion+ debt figure we’ve been discussing. That’s because these unfunded liabilities are future expenses.

The government is on the hook for them, but because this money hasn’t actually been spent yet, the government is more than happy not to include its amount when tallying what it owes creditors.

So, how big are these unfunded liabilities?

The group USDebtClock.​org puts the number at over $159 trillion.

When we add together our current debt and these unfunded liabilities, USDebtClock.​org reveals that the cost per U.S. citizen is a whopping $565,137.

Now would be an appropriate time to add that a Federal Reserve survey in 2019 found that almost 40% of American adults wouldn’t be able to cover even a $400 emergency with cash that they could quickly pay off.

Bottom line, the U.S. owes more money to more lenders than at any time in our history. And this bill is like a snowball, barreling down a mountain, picking up speed and size.

So, what’s going to happen?

Will our politicians do the wise-yet-unpopular thing by reining in spending, cutting wasteful programs, and eliminating their own boondoggle projects?

Well, that would be political suicide, so I’m going to guess “no.”

Instead, we’re going to see our politicians let you and me foot this bill — but not through taxes, mind you. The citizenry wouldn’t tolerate that.

Instead, it’s going to happen through a camouflaged method — a “stealth” tax …

The weakening of the U.S. dollar.

This is going to be awful for the portion of your wealth that you have in U.S. dollars.

***How does dollar debasement really work?

The U.S. government owes more money than it can possibly pay back with sound money.

So, it will pay it back with “funny money” … money created out of thin air. This will create inflation … and cause the value of the U.S. dollar to plunge in value.

Now, inflation is a term that gets thrown around a lot. So, let’s talk about how currency debasement works because it’s critical that you know what’s coming.

Inflation is the increase in the supply of money … which decreases the value of each “unit” of money. In America’s case, that unit is the dollar.

Now, let’s say the U.S. has $100 million in its entire monetary system. But the government wants to fund a new social program with a $20 million price-tag. It doesn’t have this money through tax revenues, so it decides to create this $20 million from thin air.

Doing this will increase the number of dollars in circulation by 20%. (Remember, we started with $100 million and then added $20 million more, which is a 20% increase.)

Since lots of new dollars make their way into the economy, more people are out spending these dollars on the same goods. In other words, there’s more demand.

Remember back to Econ 101 — what happens with there’s more demand for the same supply?

It’s critical to realize that neither the car nor the sandwich got 20% better. The value of the money simply fell … and caused the prices you see every day to increase.

If your bank account didn’t get 20% bigger at the same time, then you became poorer. Not because someone stole your dollars, but because you now must spend 20% more of your dollars to get the same “stuff” as before.

You got nailed by the stealth tax.

This is inflation. And it’s coming.

***Keeping an eye on the U.S. dollar and the 10-Year Treasury

Below is a chart of the U.S. Dollar Index. It’s a measure of the value of the U.S. dollar relative to the value of a basket of six major global currencies — the Euro, Swiss Franc, Japanese Yen, Canadian dollar, British pound, and Swedish Krona.

As you can see below, the U.S. Dollar has been losing value fast since March of last year. This is what the purchasing power of your dollars declining looks like. 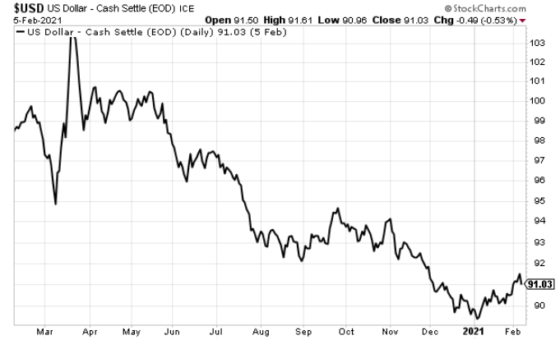 Now, some of you will say “but look at 2021 — I see an uptick. It looks like the dollar is getting stronger.”

What we’re seeing here is the dollar getting stronger thanks to the recent spike in the U.S. 10-year Treasury yield. The “10-year” is a key global benchmark interest rate. As it goes, so goes countless other interest rates (one of the most notable is your mortgage rate).

Treasury yields have been depressed for nearly a year. That’s because bond traders were willing to accept virtually no return on their investments as the Federal Reserve pegged short-term interest rates at zero and there was no economic growth or inflation.

But in January, when it became clear that Democrats were going to control all branches of the government, bond traders looked ahead at what that meant …

In light of this expectation, bond traders began demanding more of a return on the 10-Year. 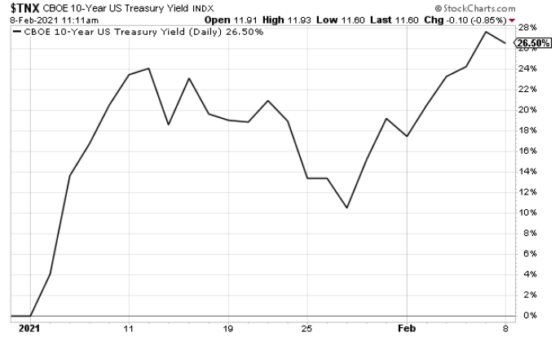 So, the dollar has piggybacked on this rising 10-Year yield. After all, higher yields make the dollar more attractive to global investors than some foreign currencies that are even weaker.

But let’s not forget the big picture …

There is a long history of high budget deficits being associated with inflation, and Washington’s current profligate spending and the Federal Reserve’s expansive monetary policy may be pushing the U.S. down that path …

Now, after a decade of modest inflation that has made many expect it will always stay low, a rise in inflation may come as a surprise …

Combined with the Fed’s expansive monetary policy, the government’s income supports have generated a surge in money supply and excess household savings.

Even before the latest Treasury distribution of $600 checks, much less the new round of checks Mr. Biden proposes, personal savings were an estimated $1.5 trillion higher than pre-pandemic levels …

But policy makers must take account of where things stand now and how far they’ve pushed the dials.

If the vaccines are successful, full economic recovery will naturally unfold, and the emergency policies that helped sustain the country during the crisis will prove excessive once the economy normalizes.

***What you can do about this

There’s a simple prescription — move a majority of your wealth out of the dollar.

That’s what we’ve just seen Elon Musk do with Tesla, as he moves a significant chunk of Tesla’s cash into bitcoin. You could follow him into bitcoin and elite altcoins (we’re fans of this move).

There are even collectibles — coins, wine, vintage cars, artwork …

There are many assets that will do the trick, but they all serve the same purpose — they help you retain the purchasing power of your wealth as the dollar slides.

The sky is not falling. You don’t have to bail on the dollar tomorrow. We’re going to see this debasement process play out over quarters and years, not days.

But this dynamic is in motion.

Inflation — the stealth tax — is coming, and it’s going to hurt the normal American who isn’t prepared.

When false money, under whatever form it may take, is put into circulation, depreciation will ensue, and manifest itself by the universal rise of everything that is capable of being sold.

But this rise in prices is not instantaneous and equal for all things. Sharp men, brokers, men of business, will not suffer by it; for it is their trade to watch the fluctuation of prices, to observe the cause. And even to speculate upon it.

But little tradesmen, countrymen and workmen, will bear the whole weight of it.

The rich man is not any richer for it, but the poor man becomes poorer by it.

So, as we wrap up, is this issue on your radar? Are you worried about it? If so, what steps are you taking? If not, how are you analyzing things?

We’d love your thoughts, so email us at digest@investorplace.com.