The Uber IPO Is the Amazon of Life!

Arguably, it’s the most controversial initial public offering in recent memory. This week, Uber stock will be available to the public for trading, and why not? The ride-sharing platform has taken mainstream society by storm. Why then should the Uber IPO be any different? 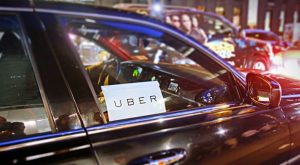 Already, I see various opinions sprout up on the internet. On one hand, advocates of the Uber IPO claim that it’s far superior to rival ride-sharing platform Lyft (NASDAQ:LYFT). While the two look similar on surface level, Uber offers greater scale and more synergistic opportunities. Perhaps not coincidentally, LYFT stock collapsed after its debut.

But on the other end of the scale, many decry Uber’s painfully disruptive service. Uber directly impacts hard-working Americans serving in the taxi and transportation services. The New York Times’ Farhad Manjoo called the Uber IPO a “moral stain” on Silicon Valley.

That’s sharp rhetoric coming from a major news outlet. At the same time, we can appreciate the strong sentiments. As I said, Uber stock is probably the most controversial investment of this decade. It’s also going to be the most important.

Some analysts, like Wedbush’s Dan Ives, believes Uber stock will become the “Amazon of transportation.” For me, that descriptor doesn’t go far enough. Uber is really the Amazon (NASDAQ:AMZN) of life. Here are three reasons why:

I first used the ride-sharing app here in San Diego, California, as a test run. Prior to January 30, 2019, I’d never used the Uber app.

But since then, I’ve used the platform any time I can’t or don’t want to use my car. This includes rides to the airport as well as the night out in town. But my most frequent usage isn’t here at home, but instead, in foreign countries.

Previously, hailing a taxi in an unfamiliar environment required intimate knowledge of the area’s language and customs. Now, everything is handled through the app, essentially centralizing global transportation networks. Under this arrangement, you no longer have to worry about getting ripped off from your taxi driver. It’s brilliant, and it’s one reason why I support the Uber IPO.

Another reason? In many parts of the world, riding with Uber is safer than taking public transportation. A key example is Russia. I’ve always wanted to visit this country, but one thing has kept me from buying that ticket (and a visa): I’m not white.

Russia has a long, complex relationship with xenophobia. Let me be clear: I’m not saying that Russia is a racist country. However, enough people believe in certain nationalistic ideologies to make travel for non-whites dangerous.

With Uber, I can sidestep the metro system, where neo-Nazi thugs hang out and search for victims. It’s no exaggeration to say that the Uber IPO is the practical visa that I need to visit the country.

But this isn’t just about avoiding racists. Indirectly, Uber stock allows people worry-free access to the global economy. That’s a major development that will positively change many people’s lives.

Although I speak competently about the technology sector, in my personal life, I’m not big on technology. For instance, even though everyone around me is encouraging me to sign up, I don’t have a Netflix (NASDAQ:NFLX) subscription. I’m still watching TV through my increasingly-outdated Dish Network (NASDAQ:DISH) provider.

And until I get my new ride, you can still catch me stick-shifting away on the road. You can almost say that I’m tech-deficient. In this smart-device-obsessive culture, I take that label as a compliment.

Where I diverge significantly from my Luddite personality is Uber. Moreover, I’m not just a fan of the core ride-sharing component. A few months ago, I tried Uber Eats, the company’s food-delivery service. Like the ride-sharing app, Eats was quick, convenient, and relatively cheap.

Of course, these services aren’t necessarily cheap on an absolute basis. But depending on your circumstances, they may represent great value. If you don’t have any food in your fridge, going out to eat takes time. In the gig economy in which many Americans ply their trade, time is money. Therefore, saving time saves money.

Plus, millennials love food-delivery services, which bolsters the case for the Uber IPO. Younger workers, despite not earning as much, favor experiences over attaining stuff. Uber, Lyft, and similar companies have become ingrained in youth culture. That trend will only rise as the emerging Generation Z takes over the wheel.

And Yes, It’s the Amazon of Transportation

After spending so much time on how the Uber IPO will change the world, its ride-sharing platform seems an afterthought. But it’s not just the company’s international presence and tremendous scale that impresses me. Rather, Uber transformed a demographic culture.

One of the rites of passage in America was owning a car. Today, that’s no longer the case. Millennials just don’t care about driving the way prior generations did. In fairness, this trend developed over many years. But it’s also fair to say that Uber isn’t doing automakers any favors.

As future generations came of age, they’ll continue what millennials started. And as they age, ride-sharing technology will rise with them. We’re already seeing that with Alphabet’s (NASDAQ:GOOG, NASDAQ:GOOGL) Waymo, which is an artificial-intelligence-powered taxi service.

Because of Uber’s first-to-market advantage and their constant push for innovation, I expect them to lead us into this brave new world. Therefore, don’t treat Uber stock as a flavor of the week: next to the blockchain, this is the most transformative investment we’ve seen so far.

The Economic Effect of Compliance On Cannabis Companies