On Friday, March 20th, it appeared there was no bottom in sight for the stock market. 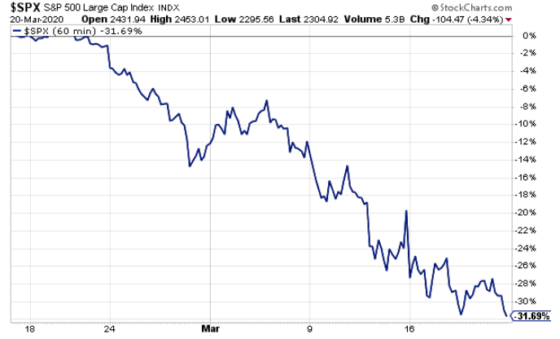 On that day, here’s what Matt McCall, editor of Early Stage Investor, wrote to his concerned subscribers:

I know it’s scary out there. I know the headlines are terrible. I know stocks are down big.

But as I’ll detail in a moment, now is NOT the time to panic.

Instead, I urge you to follow Warren Buffett’s advice … and see this time of extreme fear as a time of great opportunity.

What Matt couldn’t have known was that the market-bottom would come on the very next trading day.

***As part of his update, Matt had a plan … a way to take advantage of the historic market collapse

The graphic below is what he sent his Early Stage Investor subscribers, preparing them for what he believed was coming … 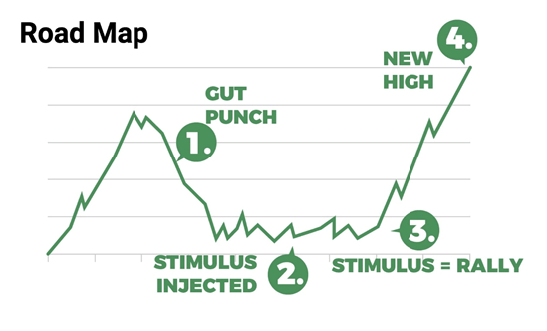 With the gift of hindsight, we know how things turned out. 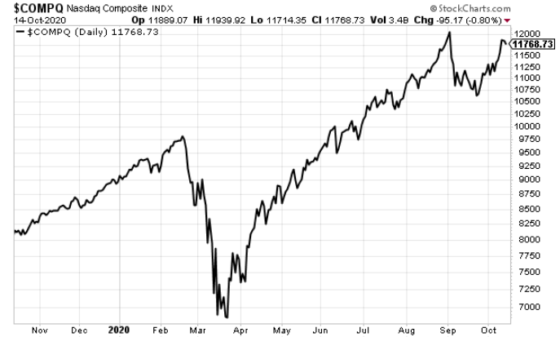 Here’s Matt from an update in June, commenting on the market-action since his call:

To be honest, we’re getting back to highs faster than I thought we would.

But once again, it’s not about the timing.

It’s about thinking rationally and putting yourself in position to make money.

***So, how have Matt’s recommendations worked out for his Early Stage Investor subscribers?

Well, on April 1, he recommended Ontrak.

There was Workhorse, recommended on May 1.

Then there’s CEVA, with the official date of April 1.

Or we could look at Viva Biotech, also from Feb. 5.

Perhaps the easiest illustration of how it all panned out comes by looking at Matt’s “Crisis & Opportunity” portfolio for Early Stage Investor subscribers. He launched it in the midst of the market volatility, on April 1.

On that day, there were just three recommendations. By mid-June, Matt had added another five.

As I write Friday morning, the average gain of these eight stocks — despite the down market last month — is 127.43%.

***This is great news for Matt’s subscribers, but …

What if you weren’t one of Matt’s Early Stage Investor subscribers who took part in these gains?

We’ll circle back to that.

First, how do you feel about the market right now?

If you remained invested during the crash earlier this year, you probably feel fairly good given the blistering recovery we’ve enjoyed.

Unfortunately, not everyone can say that. Many investors either sold in the volatility or didn’t use the temporary weakness as an opportunity to add to their portfolios.

Either way, the market is always forward-looking. So, regardless of what you did in the wake of the late-March lows, how do you feel about where the market goes from here?

***Even the most bullish investor has reason to feel uneasy

Coronavirus cases are rising again … various states are suggesting a new round of lockdowns if overall health conditions worsen … it appears the progress on employment numbers is stalling out … and we’re weeks away from what could be a bitter, highly-contested presidential election outcome that could result in social unrest.

Not exactly a litany of “green lights” for the stock market.

Matt is incredibly bullish right now and believes there’s still tremendous wealth to be made in stocks — even starting from today.

In other words, the analyst who literally drew the recovery roadmap, then watched it play out nearly exactly as he predicted … who led his subscribers to a slew of triple-digit winners as high as 785% (in less than seven months) … who now has 23 different 1,000%+ recommendations under his belt …

He believes a small section of the stock market is about to melt-up.

Now, circling back to the question I asked a moment ago after profiling Matt’s recent winners …

What if you weren’t one of Matt’s Early Stage Investor subscribers, participating in all his gains?

In fact, it’s just getting started.

Regular Digest readers will recognize a phrase we’ve used several times at this point. It originated with our CEO, Brian Hunt:

“It’s not so much a stock market as it is a market of stocks.”

The quote was a part of a discussion about investing in the wake of the pandemic market crisis — namely, while it’s easy to think of “the market” as one big monolith that rises or falls in unison, the reality is that it’s made up of thousands of companies with widely-varying fortunes — and futures.

What’s great about this is that it frees an investor from his or her fate being tied to “the market.”

We’d all love if the S&P continues surging. But if that doesn’t happen, it’s comforting to know that big returns are still possible, even in a down market.

They key is to be invested in a small group of strong market leaders.

He tells us these stocks have been the leader in every bull market for decades:

When it comes to extreme wealth creation, few endeavors can compare to being an owner of a small company that grows large …

We’re still at the beginning of this decade filled with massive potential, and the biggest gains will come from buying the best, most innovative small stocks now …

(They) happen to be the best way to make a lot of money in the next decade … a decade that will be so big and monumental that I’ve come up with my own name for it: The Roaring 2020s.

With this in mind, we want to invite you to a special, live event next Tuesday, October 20, at 4 p.m. ET.

Matt will be sitting down to explain why’s he’s predicting the start of a new bull market that will play out over the next 10 years.

More importantly, he’ll be detailing these small-cap market leaders he believes will surge.

***But why now? Is this really a good time for small caps?

… small-cap stocks have come to life again after bigger companies — especially tech companies — outperformed in the initial part of the recovery from the February-March sell-off.

The most widely followed small-cap index, the Russell 2000 (the purple line below), has bounced sharply over the last month or so and pulled ahead of the three major indexes. 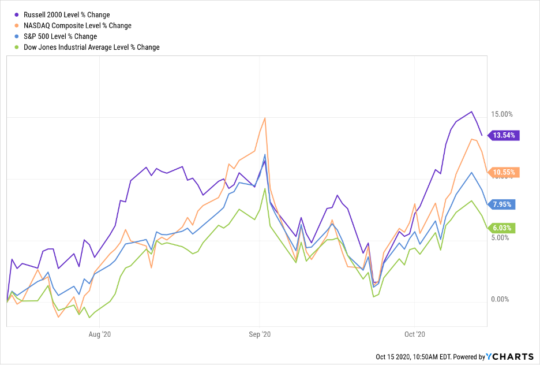 In fact, small caps are trading at their biggest discount to large stocks in about two decades, according to recent research from Bank of America.

The firm said that small caps are trading at a 26% discount to large companies.

That’s a strong sign that the historical outperformance of small caps is set to continue.

***Join us on next Tuesday to learn more

At the very least, come listen to why Matt is as bullish as he is. Worst case, you’re a more-informed investor with a new perspective on the markets, as well as small-cap stocks.

Best case, you see the opportunity as does Matt, join him in his recommendations, and 6-12 months from now, we’re profiling a 785% winner like Matt’s subscribers locked in with Workhorse.

To join Matt, just click here to reserve your seat.

I’ll give him the final word:

The path to life-changing wealth depends on getting in on these stocks EARLY — and there’s still time.

I look forward to seeing you next Tuesday.