This Month Could Make or Break CSX Stock, in More Ways Than One

It was the shot heard ’round the railroading world, so to speak. When CSX Corporation (NASDAQ:CSX) posted its disappointing second-quarter numbers a week-and-a-half ago, not only did CSX stock crash, it pulled some other — though not all — rail stocks like Union Pacific (NYSE:UNP) and Norfolk Southern (NYSE:NSC) down with it. 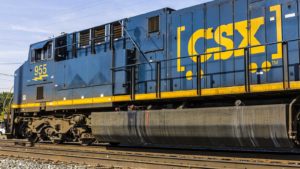 And for good reason. The company’s culling of its revenue outlook for the full year voiced what some in and outside of the industry have been quietly thinking for a while. That is, the economy is slowing down. Several reports confirm this.

There’s still one last bastion of hope for CSX and its peers. However, if we don’t see signs of a recovery soon, in August at the latest, here’s the painful reality: CSX stock and most other railroading names could become even more difficult to own.

When CSX CEO James Foote commented, “The present economic backdrop is one of the most puzzling I have experienced in my career,” it wasn’t excuse-making. The economy, seemingly healthy on the surface, is showing several cracks under the hood.

Railroads have fallen into those cracks, since they are more vulnerable than most sectors to the weak points. As Union Pacific CEO Lance Fritz explained as part of his company’s post-earnings discussion, “There [are] some unique impacts that are happening to the railroad that aren’t reflective of the U.S. or global economy.”

The Q2 numbers from CSX confirm it. Earnings of $1.08 per share of CSX stock were up 7% year-over-year. However, they fell short of the $1.11 analysts were modeling. Revenue of $3.08 billion missed analysts’ forecasts as well. Total freight volumes fell 4%. Additionally, intermodal volumes — accounting for 40% of the company’s total volume — dropped 10% YOY.

The American Association of Railroads’ data says it wasn’t just CSX either. Intermodal traffic snapped back for the past couple of weeks, but somehow remains below 2018’s impressive year-to-date levels.

Conflicting Data a Source of Confusion

Much of that weakness became evident by other measures in the meantime. Industrial production stagnated in June. GDP fell during the second quarter rather dramatically. Import prices fell in June by the most they’ve fallen in six months. New tariffs grinded away at purchases of foreign-made goods.

Worse yet, many of those goods which would arrive and be transported in intermodal containers. Union Pacific CEO Lance Fritz argued the same, commenting, “We definitely see a trade impact on our grain exports.”

Still, not all is harrowing. The United States’ unemployment rate remains near multi-year record lows, while wages continue to make their way to record highs. The average consumer appears to be doing just fine despite the impact of tariffs.

It’s a nuance that wasn’t lost on Foote. He added to his assessment, “We are seeing a range of conflicting data points and economic indicators and regularly speak with customers who despite the recent downtime and slowdown, remain cautiously optimistic about the second half.”

Foote’s addendum may have been even more insightful than it initially appeared.

Rail-shipping prices have been in decline since March, jibing with the notion that demand is slipping. Intermodal shipping rates have been particularly troubling. They slid from a peak of $151.90 (per mile) in March to June’s level of $142. Based on rail transportation standards, that’s a significant decline.

There’s a footnote that must be added to the discussion though…two of them actually.

One is that intermodal prices reliably slump through June, but just as reliably recover beginning in August. Cass Information Systems plots the annual path of price changes. The company verified that shipping rates for intermodal containers have rebounded from pullbacks early in the year in each of the prior three years. 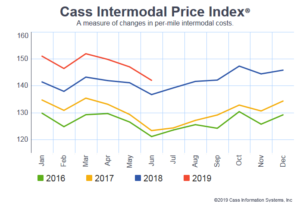 Though it’s a backdrop that should soothe investors fearing the worst lies ahead, the scenario still poses problems. Namely, it suggests that any seasonal recovery might not start promptly in June. And even if it does, it may feel like a half-hearted rebound. 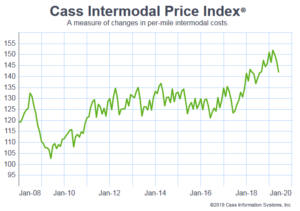 It matters simply because investors are comparing CSX to year-ago results that weren’t likely to be sustained no matter how robust the economy was or is. Trade impasses aren’t abating either.

There’s nothing in the mix that spells outright doom for the CSX stock price though; just a lot of turbulence ahead.

That turbulence of late has leaned bearishly. However, it’s possible that the performance of the CSX stock price could dramatically worsen before it improves.

The post-earnings pullback dragged CSX stock to a long-established support line, but no further. The bulls are trying to stage a rebound effort here. If they fail though, there’s not a meaningful support level again until the late-2018 low of $58. Even then, there’s no assurance any selling will abate there. The optics, if nothing else, look bad. 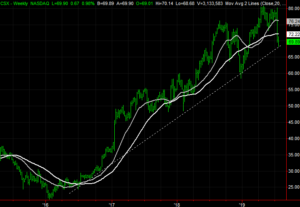 The chart and some important news have synced up time-wise. Investors appear content to keep the CSX stock price where it is while they wait and see.

Check the American Association of Railroads and the Cass Information Systems data often between now and the next earnings report. If there’s no meaningful proof of life by the end of August, it’s going to be tough to stick with any long CSX positions.

15 Cybersecurity Stocks to Watch As the Industry Heats Up