As I write Friday morning, gold is giving back a bit of its recent gains.

One possible explanation is the July jobs report, showing 1.8 million new jobs created, which beat the consensus estimate of 1.48 million.

(Good news for the economy means there’s less demand for the “chaos hedge” of gold.)

Or perhaps the sell-off is simple profit-taking after a moonshot advance since mid-February, as you can see below. 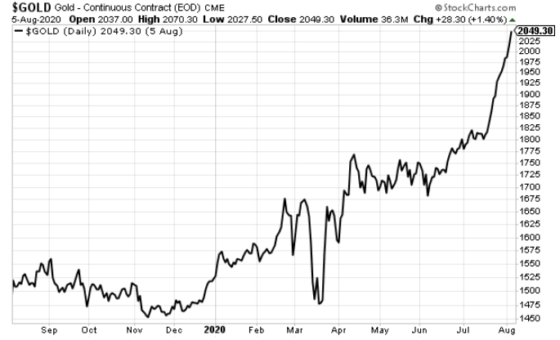 Whatever the reason for today’s pullback, you can all-but count on it being temporary.

For the past eight consecutive trading days, gold has hit a new all-time intraday high, and the precious metal isn’t showing any signs of slowing down.

Gold has not only blown past the previous all-time high established in 2011 after the 2008 Financial Crisis but also climbed above $2,000 per ounce for the first time in history.

In their update, John and Wade go into five fundamental factors that tend to drive gold prices: Global risk discounting

Today, rather than dig into each reason, let’s just jump to the punchline — gold is likely headed higher.

Given this, let’s shift our focus to how several of our InvestorPlace analysts are playing the move. In doing so, we’ll make sure you’re aware of the different ways you could benefit from the continued gains that are likely headed our way.

The easiest, most traditional way to get gold exposure is through an ETF such as “GLD,” which tracks the market price of gold.

We first put GLD on your radar in the January 9th 2019 Digest titled, “There’s a Stealth Bull Market in Gold. Are you Missing It?” Since then, the ETF is up 59%.

Now, you could simply buy GLD outright. But another option would be to use it to generate cash — that’s what John and Wade have been doing by selling put options on the fund.

It’s beyond the scope of today’s Digest to explain how puts work. But in short, the higher gold climbs, the easier it is for put-sellers to generate streams of income.

Here’s how John and Wade explained it in an update from June:

GLD dropped to up-trending support at $159 before bouncing back up toward the top of the fund’s recent trading range.

This has been fantastic for our put write on GLD. The higher GLD has gone, the lower the value of the GLD puts has gone and the more profits have accumulated in our trade.

Now, keep in mind, selling puts on GLD would be a short-term way to profit from gold. And those profits would be capped, as opposed to buying GLD itself, which has unlimited upside.

Of course, the flip side is John’s and Wade’s strategy puts cash into your pocket instantly — something many investors need in today’s 0%-interest-rate world.

But if GLD options or the ETF itself isn’t your thing, how else might you play gold?

Neil George is our expert income investor. In Profitable Investing, he focuses on finding his subscribers safe, high-yielding income plays whether from dividend stocks, bonds, REITs, MLPs, you name it.

For all of you suddenly raising your eyebrows at why we’re turning to an income investor to discuss an asset that pays zero income, let me provide some context …

Months ago, as gold began making its move, it caught Neil’s attention. Based on many different factors — interest rates, the value of the dollar, inflation rates, Fed policy, and so on — Neil was bullish on the precious metal.

But as the income-investor he is, rather than recommend it directly, he found a gold-related investment that actually churns out a cash-flow stream …

In exchange for the loan, a royalty company gets a cut of whatever gold the mining company pulls out of the ground.

This means that (gold royalty companies) don’t have to buy and run mines or deal with the related expenses that bring a whole lot of costs and uncertainty to other gold businesses.

Now, sure, that’s not a lot, but let’s compare it to GLD from above.

First, GLD actually comes with an expense ratio of 0.40%. So, you’re paying to hold it. FNV’s 0.65% yield looks great by comparison.

Second, FNV uses debt, or leverage, as a company. This amplifies its gains relative to GLD as the price of gold climbs.

To illustrate let’s compare FNV to GLD over the last 12 months. 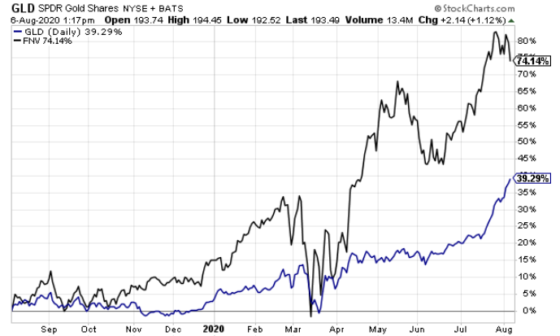 The higher gold’s price climbs, the more exaggerated this spread is likely to become.

Continuing on, what other ways might you play gold?

***Why stop at gold? Why not profit from silver?

Though we’re focusing on gold, we need to alert you to its companion metal, silver. That’s because moves in silver tend to be even bigger than what we see from gold.

To illustrate, let’s compare GLD to SLV, which is the iShares Silver Trust. It’s basically GLD for silver.

As you can see below, since mid-July, while GLD has tacked on about 15%, SLV has exploded 48% higher. 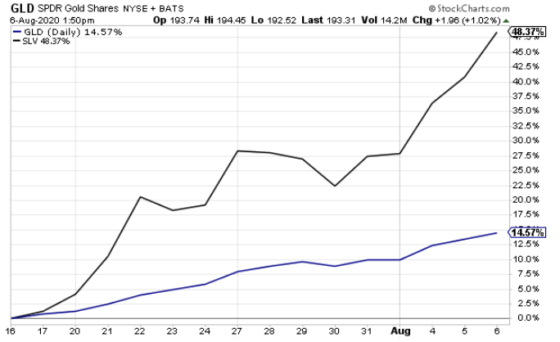 It turns out, SLV is one of the ways our macro specialist, Eric Fry, played silver to bring his Speculator subscribers triple digit gains.

Last week, he suggested that his subscribers lock in a portion of profits on their gold/silver plays. And when it came to their SLV position, they pocketed 340% from their bullish call option.

Gold miners, like gold royalty companies, are a leveraged way to play a move in gold.

This is dangerous when gold prices are falling, but it can be highly lucrative when gold is surging.

Now, you should also know that there are well-run gold miners, and awful gold miners. So, investing in just one can be risky. You dilute that risk by investing in an ETF that spreads your capital over a basket of gold miners.

One such ETF is VanEck Vectors Gold Miners ETF, GDX — this is how Eric chose to play miners. 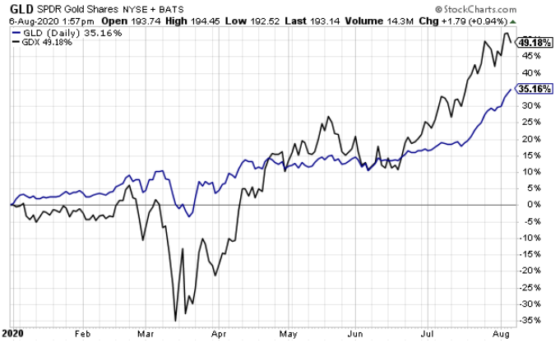 Similar to SLV, Eric used a call option with GDX rather than buying the ETF outright.

Last week, he recommended his subscribers lock in a portion of their gains, banking 155%.

(Eric had a third profit-taking recommendation that locked in 160% gains on a top-tier gold miner.)

Congrats to Eric and his Speculator subscribers for three very lucrative trades.

While it’s highly unlikely gold and silver are anywhere near peaking, they’re likely due for a breather — whether today’s pullback is the beginning of that, or just a mini-pause is unclear.

Either way, the precious metals have been surging at a breakneck pace since mid-July. While they’ll likely to see higher prices in the months and quarters to come, it should surprise no one if they pull back and trade sideways for a period of consolidation.

At the same time, Eric’s use of options mean that gains and losses are magnified when compared to owning the underlying asset itself.

So, Eric’s “sell” recommendations merely reflect wise, shorter-term trade-management than a loss of faith in gold and silver.

Wrapping up, you have your bread-and-butter gold ETF (and silver ETF), gold royalty companies, and gold miners as three ways to play the move.

We’ll keep you updated over the coming weeks.

What’s behind the course correction for marijuana stocks?