Financial Stocks Look Great … if You Don’t Look Too Closely

By John Jagerson and Wade Hansen

Earnings season for the second quarter has officially started. Bank reports started to roll in on Tuesday.

So far, traders don’t seem shocked and prices have remained stable, but the underlying performance is troubling. We should consider how we can take advantage of any near-term market volatility if conditions worsen.

JP Morgan (JPM), Wells Fargo (WFC) and Citigroup (C) reported earnings on Tuesday morning with some fairly dire predictions embedded in their data. This might seem confusing because some of these banks’ current revenue and profits from operations were within expectation ranges or better.

For example, JPM reported higher revenue than the same quarter last year, and its trading operations set new all-time records. Goldman Sachs (GS) put up similarly impressive trading numbers on Wednesday morning. Even though a revenue surprise driven by trading is rarely repeated, it is still better than the alternative.

But the three big banks that reported on Tuesday also had $28 billion of allowances for bad loans on their income statements and balance sheets, which is a big concern.

This is the worst rise in bad-debt expectations since the 2008 Financial Crisis.

To put this in perspective, these same banks maintained an allowance for bad debt in the $3-$4 billion range in their quarterly reports over the last few years.

There are two concerns here: First, if the bad-debt expectations turn out to be even close to accurate, we will see earnings in this group collapse later this year. Second, this statement represents a major negative adjustment to forward-looking performance, and it could affect investor sentiment negatively.

However, thanks to perpetual government assistance and easy lending from the Federal Reserve, the financial sector punches way above its weight class, providing 22.31% of the earnings in the S&P 500. The big banks, which make up less than 3% of the value of the index, are providing 8.76% of profits.

In contrast, the technology sector is roughly 23% of the value of the S&P 500, and it is a proportional 20% of the index’s earnings. Although future expectations from the tech sector will likely matter more to overall market expectations, the bad news in the bank reports is amplified by their larger-than-expected earnings contribution to the overall market.

If investor expectations could be weighted based on the amount of money each sector contributes to earnings, we would suggest that tech’s performance this quarter will be solid enough to maintain the bullish rally.

However, since the financial sector tends to be weighted more heavily by traders (in addition to its unusually large influence on total earnings) we are tempering our expectations and being a little more cautious.

Interestingly, although the bad news was focused on the financial sector, for the most part, these stocks have remained stable. With WFC as the notable exception — it was down 4.5% on Tuesday — investors seemed to have brushed off the bad news for now.

As you can see in the following chart, the Financial Select Sector SPDR Fund (XLF) has continued to hold at support near $23 per share. This makes us a lot more confident about maintaining a cautiously optimistic bias towards the market. 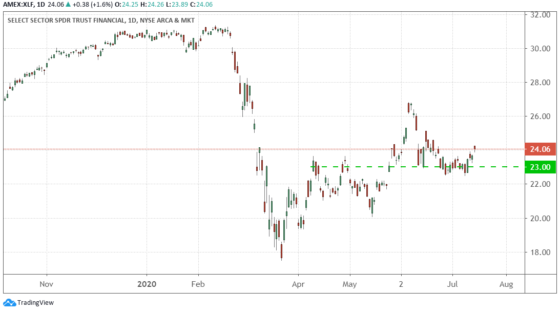 Where Are the Opportunities?

While this all may sound a little bleak, there are some interesting opportunities in the financial sector that we plan to prioritize if conditions remain relatively stable.

If it hadn’t been for record trading revenue, more of the big bank reports would have looked like WFC’s. In addition to loan loss provisions, the low interest rate environment hurts banks’ ability to profit from the yield spread (the difference between what a bank pays for deposits and loans versus what a bank earns on the loans it extends).

But low interest rates, a shift to online transactions, cashless purchases in person and demand for consumer loans should provide plenty of lift for credit companies, payment processors and even banks with heavy exposure to consumer lending, like Bank of America (BAC).

For example, as you can see in the following chart, pure payment processors like Square (SQ) and PayPal (PYPL), along with dominant retail firms like eBay (EBAY), Amazon (AMZN) and Target (TGT), are outperforming the banking sector, as represented by the SPDR S&P Bank ETF (KBE) by a wide margin. These groups are at the top of our watchlist as potential buy opportunities as investors price in a potential slowdown in the financial sector more generally. 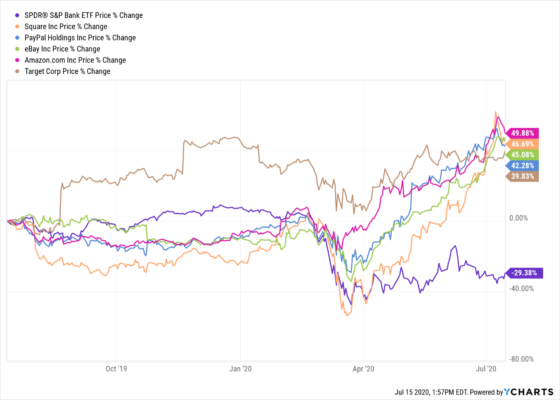 We ran a study of the last six times the financial sector was digging itself out from a bear market and found the following comparison of one year returns very interesting. Since the 2008 Financial Crisis, payment processors and online/discount retailers have outperformed the financial sector in all but one bear-market recovery.

What this indicates is that stimulus spending and shifts in consumer behavior lead to underperformance in banking and outperformance in retail lending, payment processing, and online sales.

While we don’t recommend putting all our eggs in one basket, we can see a lot of strategic value in continuing to prioritize the best sectors while reducing or avoiding exposure to the big banks.

Although we still have an optimistic outlook for stocks this summer, we continue to emphasize our focus on profiting through option income rather than taking bigger bullish risks. At this point, we believe the best route will be in remaining focused on the best relative sectors, even if that narrows our diversification a little.

Earnings are now rolling in with the industrial, service, technology, and retail sectors due to start reporting over the next three weeks.

According to Zacks Research, earnings in the second quarter are likely to be down 44% over the same quarter last year with a drop of 11% in revenues.

While that has lowered the bar for companies to surprise to the upside, we can’t ignore the fact that if the recovery does not start picking up steam, stocks could be overpriced at a historically unprecedented level.