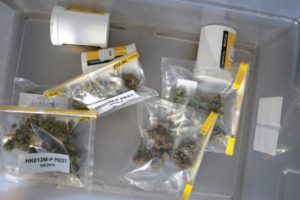 Flower samples are tested for yeast and mold at RM3 Labs in Boulder, Colorado. (Photo by Matthew Staver)

Understanding and identifying fungal pathogens and how to prevent and treat them is vital to the success of producing high-quality and safe medical cannabis.

To help with this, research published in Plant reported the fungal species that affect commercial cultivation of cannabis in Israel. The most common fungi the researchers found on leaves were Alternaria alternata and Botrytis cinerea, which can contaminate cannabis flowers, causes gray mold, and is a known human allergen. Stems and soil-borne species were most commonly Fusarium oxysporum and F. solani.

They also found species of Aspergillus and Penicillium on leaves, which is significant because these fungi produce mycotoxins that can harm patients.

In 2019, the State of Colorado added testing for mycotoxins to its medical cannabis regulations, which specify a safe maximum allowable total number of yeasts and molds per gram for flower, water-based, and food-based medical cannabis products. This type of testing is also required in many other US states, including Florida and Michigan, as well as Canada before products can be sold to the public.

Canadian researchers also found that the most common fungal pathogens on outdoor and hydroponically grown plants included those found on the Israeli samples, but saw only low levels of A. alternata. This could be due to differences in climate and growing conditions between the two countries.

The United States Pharmacopeia, which has recently reintroduced cannabis after decades of prohibition, recommends testing for four Aspergillus species, a requirement that will likely be instituted by regulators.

Rents will be strong in this Canadian metropolis in 2021