Tyme Technologies (NASDAQ:TYME) stock is skyrocketing on Friday following the company’s announcement regarding the latest data from one of its cancer treatments. 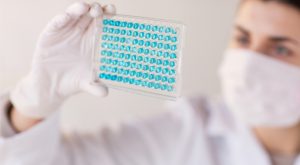 The U.S. biotechnology company revealed that it had amassed positive updated data regarding its phase 2 study of SM-88, which is a treatment designed to help out patients with pancreatic cancer. This led to trading volume increasing to more than 4.1 million shares, which is more than six times the full-day average.

Tyme Technologies said before the open that data from the study of SM-88 as an oral monotherapy revealed that the median overall survival of patients was 6.4 months, which compares favorably next to historical trials that showed survival of 2.0 to 2.5 months. “We believe that these outcomes further justify advancing the development of SM-88,” said Chief Medical Officer Giuseppe Del Priore.

“We are increasingly encouraged that SM-88 has the potential to be a new treatment approach for late-stage pancreatic patients,” he added.

TYME stock is soaring about 22.5% on Friday afternoon following the news, which brought the price of the stock up to $1.50 per share. The stock had closed at around $1.22 per share by day’s end on Wednesday, which is the price it opened at today–the stock market was not open yesterday in observation of Independence Day.

The stock is still down more than 50% year-to-date, although the boost helped it move in the right direction.

Is it wise to invest in a pre-con condo?