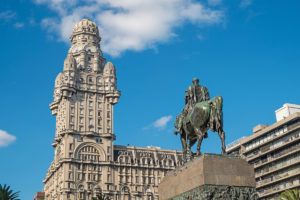 To meet a shortfall in adult-use cannabis, the Uruguayan Institute for the Regulation and Control of Cannabis (IRCCA) on Monday tapped the following companies:

The three winners had to obtain an approval from the Uruguayan National Secretariat for the Fight Against Money Laundering and Terrorism Financing (SENACLAFT).

Other companies that participated in the application process obtained more than 60% of the total points but didn’t end in the first three positions and can be wait-listed for a period of up to three years.

For that, the government keeps a $5,000 warranty deposited by the applicants.

Because the price is fixed by the government, the criteria to select the winners was purely based on technical aspects, Martin Rodriguez, executive director of the IRCCA told Marijuana Business Daily.

The price was last updated by the government in August 2019, fixed at 50 Uruguayan pesos per gram (roughly $1.35) retail, of which the producer receives about 70% and the rest goes mostly to the retail pharmacy and a small part to the IRCCA.

The pair were each authorized to grow 2,000 kilograms a year, although they failed to keep up with demand.

The three new companies will grow cannabis under the same terms and conditions applied to ICC Labs and Simbiosys.

That means five companies will be able to produce a combined total of 10,000 kilograms of recreational cannabis flower per year at a price fixed by the government.

The new awards come after ICC Labs and Simbiosys combined were unable to successfully grow the total authorized quantities.

They were only able to produce about 3,000 kilograms combined as of mid-2019, which led to constant supply shortages.

Local industry sources that spoke with MJBizDaily on the condition of anonymity confirmed that Uruguay Biopharmaceutical Research Company LLC is US-based company, as its name suggests.

They also said Jabelor S.A. is an Uruguayan company comprised of Uruguayan and Chilean capital, while Legiral is 100% Uruguayan-owned.

In 2013, Uruguay became the first country in the world to federally legalize the commercial production of adult-use marijuana.

According to the IRCCA, as of Oct. 27 almost 50,000 people were registered to legally access recreational marijuana in Uruguay using only one of the following three ways:

Uruguay also has business opportunities in the medical and hemp sectors of the industry.

Mexico is expected to become the second country in Latin America, and only third one in the world, to fully legalize cannabis on a federal level.

More information can be found in the recently published report Cannabis in Latin America: The Regulations and Opportunities.