When to Take Profits From Your Investments

In the last three days, Netflix subscribers have lost 16%+. Here’s how Louis avoided these losses, and led his subscribers to 120% gains instead

“I can calculate the movement of the stars, but not the madness of men.”

So lamented Sir Isaac Newton, formulator of the laws of universal gravitation, co-developer of calculus, creator of the Newtonian reflecting telescope …

Newton was an unfortunate speculator in the South Sea Company stock bubble during the period around 1711-1720. For all his brilliance, he wasn’t able to protect himself from losing the present-day equivalent of more than $4M on the trade.

In short, Newton got caught up in the frenzy of excitement surrounding the much-hyped South Sea Company. He rode the stock up to filthy-rich levels … but then didn’t sell.

That ill-fated decision led him to hold the stock as it plummeted all the way back down, losing him all of his gains, and more. 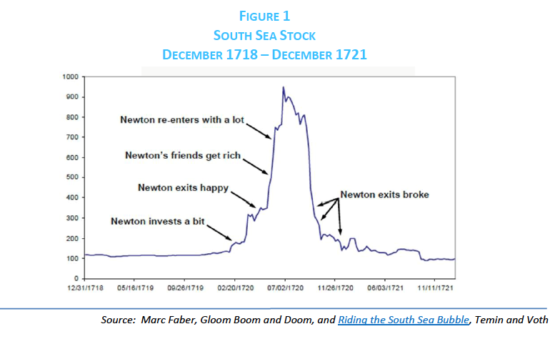 That’s because, for most of us, “buying” isn’t the hard part when it comes to investing. After all, it’s easy to get excited about a new investment if you believe in its story.

The hard part comes when it’s time to sell. If we’re up big, like Newton, most of us want to continue holding the stock for even more gains. If we’re down, we often hold in hopes that the stock will come back.

This begs a question — if one of history’s most brilliant thinkers isn’t able to identify when to get out of a stock, does that mean all hope is lost for you and me?

No, but it does point toward the need for two things: an investment plan and the discipline to follow it.

When you have these two things, “getting out” often comes at much better times, enabling you to lock in gains while avoiding disastrous losses.

For an example of selling-done-right, we need look no further than our own Louis Navellier. You see, a well-timed “sell” decision he made last month enabled Louis to steer his subscribers clear of an awful earnings report that tanked a beloved stock last Thursday.

Today, let’s dig into the details of how Louis knew it was time to get out. But then let’s pivot toward you, and how an investment plan and discipline can make a huge difference in your portfolio.

Let’s begin by turning to Louis to establish some context for what happened last week.

Today was an awful day for Netflix (NFLX) — probably its worst in eight years.

So, what was the fallout of this unexpected decline?

Netflix tumbled 11% last Thursday, followed by another 3% drop on Friday. As I write Monday morning, it’s down another 2%.

Now, what makes this a great case study for us is that Louis instructed his Accelerated Profits subscribers to sell Netflix back on June 11 … locking in a gain of 120%.

Was that sell decision easy or hard?

Well, below is how the Netflix chart looked on June 11. 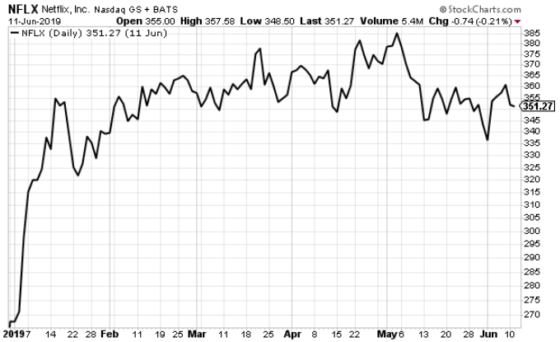 I look at this chart and see explosive gains coming out of the gate in January, followed by slower, incremental gains, and then a bit of sideways sawtoothing. Though you could argue the stock was beginning to drift lower, to me, there’s nothing in this chart that’s shouting “sell!”

On top of that, keep in mind that in the previous quarter, Netflix’s U.S. subscriptions had posted a gain of 1.7 million. Overall, subscriptions were up 26% year-over-year. And earnings per share were up, too, by 18.8%.

So, what led to Louis’ well-timed decision?

From Louis’ note to subscribers:

“For the second quarter, Netflix provided weaker-than-expected guidance. As a result, analysts have slashed earnings per share estimates and are now looking for a 34.1% drop in earnings. Let’s take that as our cue to exit. NFLX is up about 7% in the past week, so if you bought NFLX at the time of my original recommendation, you’ll exit the stock with about a 120% gain. Sell NFLX.”

Now, it turns out the earnings miss that was predicted didn’t happen, but Netfllix did suffer a huge drop in its number of new subscribers … which tanked the stock.

Regular Digest readers know that Louis is a numbers guy. While other analysts move in and out of stocks based on hunches and gut-feelings, Louis’ investment plant is rooted in objective, impartial numbers.

This well-defined, strict set of criteria guides him into select, elite stocks — and as importantly, if not more importantly, those same criteria tell Louis when to sell. It’s then up to Louis to show the discipline to actually follow through …even though a stock might appear poised for more gains.

Here’s how Louis describes this:

… I don’t believe in falling in love with a stock. I’m a numbers guy … and when the numbers turn south, I get out.

Following your investment plan isn’t always easy. Take Louis’ Netflix sell decision. At first, it seemed his timing was off.

Here’s what Netflix stock did from the June 11th “sell” update through July 4th. 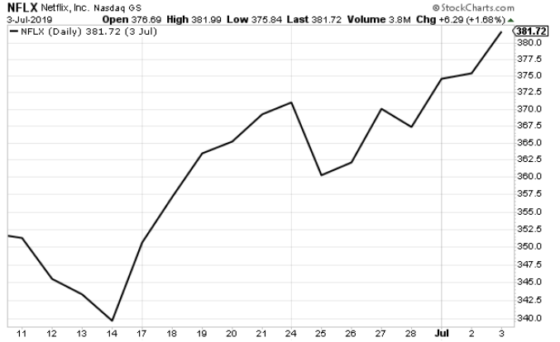 The stock tacked on roughly 8% of gains.

But then Netflix began drifting lower, ultimately leading to the bad subscriber-growth news last Thursday, which nosedived the stock. 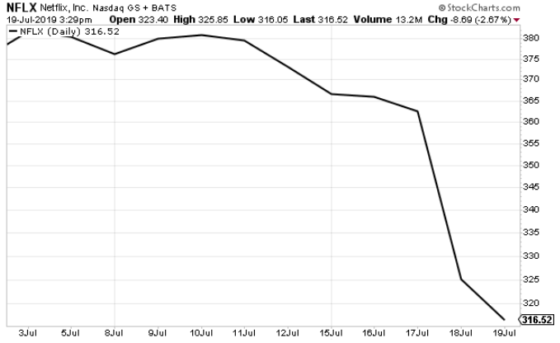 ***Leading up to June 11th, could Louis have made a case made to remain invested in Netflix despite the lower earnings revisions?

Sure. A loyal Netflix investor could have found a number of ways to explain away slower earnings growth in order to remain invested.

But you have to remember what Louis’ goal is in Accelerated Profits. He’s not looking for long-term pillars of a portfolio. He’s seeking a handful of stocks posting big growth numbers, that are poised for major, short-term gains. That means staying invested in Netflix no longer met Louis’ criteria. Therefore, as a disciplined investor, he got out.

In Louis’ own words:

But that’s not our strategy here in Accelerated Profits. To generate consistent short-term profits, we’ve found that a decline in fundamental indicators is a clear sign to move on, take profits, and focus on stocks with superior ratings.

Our system is very picky. It demands excellence from stocks. We don’t let our money sit in a stock with declining ratings when we know it can be deployed into stronger stocks. After all, I believe our money deserves the very best, and you deserve the very best, too.

A big congratulations to Louis and his Accelerated Profits subscribers on a great sell-decision that avoided some heavy losses.

***Turning to you now, do you have a clear investment plan? And are you showing the discipline to follow it?

We’ve written on this subject before. From our March 13th Digest:

Why are you investing in a specific stock? What will drive it higher? What are the risks if you’re wrong? Under what circumstances will you sell the stock if it turns against you? How long will you hold it if things go well? If the stock soars, will you sell part of it to lock in gains? At what point? Why?

The very best investors have the answers to these questions detailed before they ever put a dime into a new investment. Is that how you invest?

This is how Louis invests. He has a clearly defined set of investing criteria which he then follows with discipline. Sidestepping Netflix’s 16% market loss is a great illustration of the resulting benefits.

If you’d like to learn more about how he does it, and to be a part of what could be Louis’ next 100%+ winner, click here.

We’ll continue watching Netflix with great interest, and will keep you updated on how things unfold.